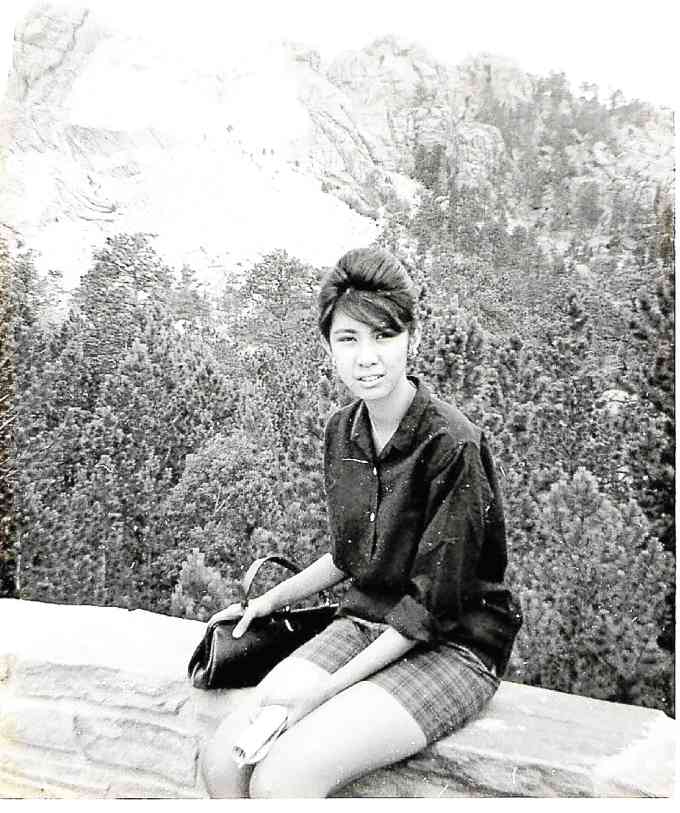 Bibsy Carballo in the 1960s

By now the news of Ma. Dolores “Bibsy” M. Carballo’s passing is all over the entertainment industry, where she gave vent to her various talents spanning almost five decades. She was a writer (pre-martial law Sunday Times magazine), award-winning documentary and TV writer, talent manager (from Jackie Lou Blanco to Dawn Zulueta), entertainment columnist (Philippine Star).

As one of her students in Communication Arts at St. Theresa’s College, Quezon City, I daresay that she has been a great influence in my career. And yes, I have known her for more than half of my life—a good 47 years!

Bibsy was my teacher, mentor, associate and friend. Bibsy was an original bohemian and really hip back then; hence, on her first day of class, she was mistaken for a student. Who would have thought this 27-year-old—in a miniskirt, Grecian inspired sandals, with a leather tasseled shoulder bag and indigenous accessories—was a teacher?

Well, she was, and a really good one!

Bibsy was not your regular kind of teacher. She would outline the basic principles and give more emphasis on their application in real life. She made sure she was able to get her message across. One other asset she had as a teacher was knowing the capabilities, interests and talents of her students, therefore enabling her to guide them toward their future careers.

I cannot forget the time I was left to teach darkroom techniques in developing and printing photos to my classmates because Bibsy had to rush off to some important appointment. Perhaps she had seen my keen interest in the subject, so she gave me the pointers, watched me make a few samples, passed on the “hat” and knew I would do my best. This put me at an advantage, as I was able to put in more hours of practice as I worked with my classmates and sharpened my skills.

Bibsy never cut corners; she gave us her best. Photography was one of my subjects, and, courtesy of Bibsy, we had no less than Asia’s top photographer at the time, Romeo Vitug, as our teacher, and we were doing field shoots under his tutelage. When I did my on-the-job training (OJT) for television production, I trained with Lupita Concio Kashiwahara for “Balintataw” and Fritz Ynfante for “The Colgate Palmolive Noontime Show,” and went on field with the News Patrol Team, all on Channel 5. I spent a little time with channels 7, 9, 11 and 13.

That was how extensive Bibsy’s network was.

I also did my OJT in public relations working with her at her office-cum-curio shop called Butingting on L. M. Guerrero Street across St. Paul College, Manila. She would send me on interviews and press coverage, armed with pen and paper and a few basic instructions. I had to develop my style, sharpen my skills and “bring home the bacon.”

I vividly remember, in 1971, an event that we covered and did a souvenir program for was a car race in front of La Salle Green Hills, with none other than Pocholo Ramirez and Butch Gamboa.

Bibsy was my mentor in every sense of the word. My senior year in college found me working part-time as her PR assistant, and as a PA in her independent TV production outfit with Lupita as director, and herself as scriptwriter. Because of this training, job opportunities were there for the picking.

When I decided to earn a master’s degree in communication arts, Bibsy told me bluntly, “You would be better off taking another course if you are planning to take it here, not abroad. You will not learn anything new because they will not be able to add to whatever you have learned through your work experience.” This was Bibsy. I ended up taking my MBA instead.

Bibsy was protective, and whenever she would sense that her “clients” had “other” interests, she would simply say, “Winnie’s my student.” And that was that.

I shared fun times with her during out-of-town shoots, beach trips and long drives. I remember her very first car, a light blue Volkswagen Beetle, which she drove around during those years. I was her passenger. I cannot forget the time she forgot the car key inside and had locked the door. Well, I saved her that day, I was able to pick her lock!

The ’80s, ’90s and early 2000s saw me with family, and I stayed for some time in New York. All those years, though, we were in contact; I would call and meet up with her, especially during Christmas. Hence, she was aware of my career developments, and to my surprise, these would be the topics of her columns. She never scrimped on praise and good words.

Eight or nine years down the road, until recently, I was doing projects with Bibsy again—writing articles, attending events, watching plays and movies. I had been able to fete her for her natal day, and exchange gifts for Christmas while celebrating with her over dinner. At this point, Bibsy was not only a mentor and associate whom I held in high esteem, but a dear and true friend.

Bibsy had a bowling group, a Scrabble group, a travel group, distinct from her friends in the entertainment industry. There were friends she would spend her birthday with and those she would spend Christmas with. Bibsy loved life and friends.

All these and more are Bibsy Carballo, whose memory I will treasure forever. And I believe that the greatest tribute one can give one’s teacher and mentor is success in one’s career.

I am certain that I am not alone in this, because Bibsy was always there for all of us. So, together with her other STC students Lorna Kalaw-Tirol, Norma Olizon Chikiamco, Thelma Sioson San Juan and Cherrie Mijares, I will say, thank you, Bibsy, for opening our eyes, for opening doors, for guiding us and caring for us, for supporting us, for being our teacher, mentor, associate and friend. We know you will always be behind us. We promise to forever make you proud. —CONTRIBUTED