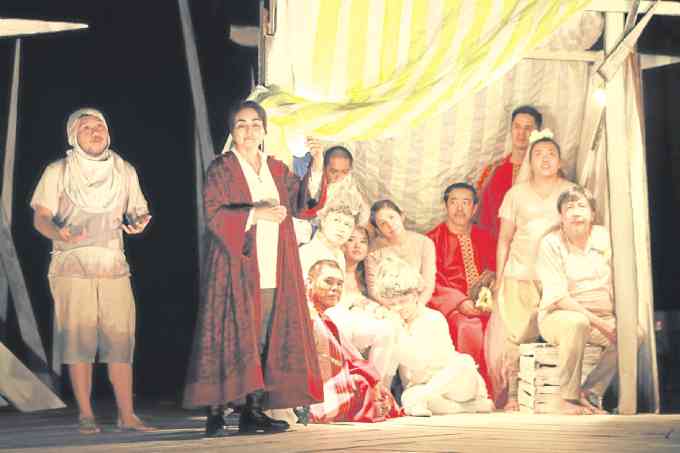 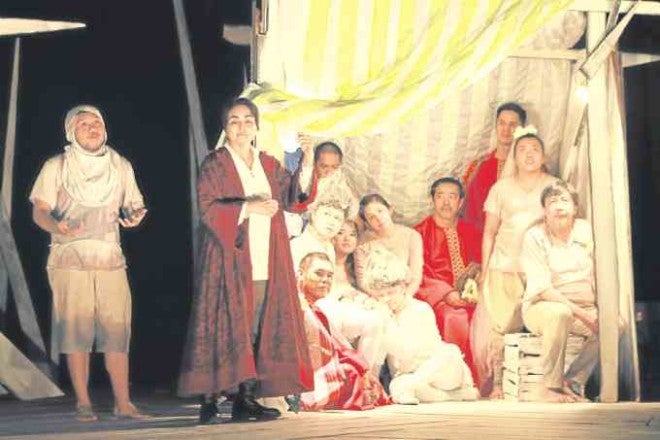 Not simply with the genius of Shakespeare, nor theatrical artifice conjured onstage out of Prospero’s magic spells, but with lives lived through Supertyphoon “Yolanda”’s onslaught; with the misery still being lived by victims in “Yolanda”’s unresolved and still muddy aftermath, did Philippine Educational Theater Association (Peta) craft its production of “Tempest Reimagined.”

Here is relevance achieved by recall—vivid memories gathered by Lingap Sining (Peta’s people’s theater program) from “Yolanda”’s epicenter in Palo, Leyte—establishing the trajectory key to this staging done in collaboration with the British Council, the Royal Academy of Dramatic Arts (Rada) and Japan Foundation, Manila (JFM).

Much loved among Shakespeare’s plays, “Tempest’”s tale of betrayal, revenge, love and forgiveness, with underpinnings drawn from medieval romance and comedia del arte, has been the subject of many revivals, each one adapting/relating “Tempest” to zeitgeist as it evolves over time, be it to Freudian psychoanalysis, colonialism, post-colonialism, or lately, to feminism, in such productions as a film starring Helen Mirren as “Prospera,” or Vanessa Redgrave onstage in breeches role as Prospero.

CB Garrucho, Peta’s president (herself a seasoned stage actress who played Prospero in this production), clarifies: “Theater, after all, is that primal storytelling, around-the-campfire experience, and whichever way the community perceives the storytelling is valid.”

It took three years of planning with Rada (begun in December 2013, a few weeks after “Yolanda”) to complete the coupling of disparate timeframes: the Elizabethan original with another which is not only contemporary but is resolutely Pinoy.

And it took ingenuity to do so.

Central to this effort was creating Jaime, the narrator.

Jaime is introduced surreptitiously—he saunters onstage, even before auditorium lights are lowered, even before the usual caveats against cell phones, eating and drinking in the auditorium are announced. He sits at stage’s edge, reclines; he plays a few notes and then a ditty on his flute.

Soon after, as the audience notices and realizes the play has begun, he stands and starts the narration. And he does so with aplomb, bridging narrative gaps between 17th-century England and the Philippines today, charming the audience with easygoing rapport.

Other devices were used to assure this connection.

Multiple roles were played by actors who alternated between an Elizabethan marooned in Prospero’s island and a “Yolanda” survivor.

Such shifts were conveyed through change of costume. Actors wore and doffed robes with such fluid grace that the repeated robing and disrobing seemed choreographed, a virtual dance that aided rather than confused the blocking of characters onstage, just as it quickened the flow of one scene into the next.

Quick pacing, however, may be boon or bane. While it can prevent boredom, it tends to hinder comprehension. Respite in the form of “dead time” becomes a must to provide some quiet, enough for the audience to absorb insights, time for them to sink in especially when narrative has been compressed and shortened as it was here, to such a degree, that connective passages in action and dialogue were easily missed.

The decision, moreover, to forego headsets and rely solely on floor microphones made voice projection doubly difficult. Rehearsals took a meager four weeks, not enough to train actors in Shakespearean English, or hone them to recite iambic pentameter with the cadence, interpretative enunciation and the elegance it requires.

Fortuitous deconstruction was Ariel’s lot in this retelling. Not that he ceased to be the “airy spirit” Shakespeare meant him to be.

“Tempest” now as a crew of three, all three Ariels are made to move with mimetic lightness, with gestures and poses conveying as they cause stage drapery to billow like storm clouds, play music, sing, perform such tasks onstage as would be performed by stagehands offstage or during intermission.

Iris, Ceres and Juno, the three goddesses who confer blessings to Miranda and Ferdinand at their wedding, are now three gods dressed in flowing robes of Chinese red. They represent the National Government, the Local Government Unit  and Foreign Aid Donors; a trio standing above the crowd of “Yolanda”’s survivors, boastful of projects that people know full well to be promises whose delivery, owing to political shenanigans and corruption, would come delayed or in trickles, if at all.

And they speak in Filipino full of biting wit, almost comical, reminiscent of that scene in Puccini’s opera “Turandot” where three ministers of the Chinese imperial court—Ping, Pang and Pong—bring relief to the otherwise murderous proceedings where the hero risk death should he fail to answer correctly the Princess’  three riddles.

Caliban, Prospero’s slave, functions as Prospero’s conscience. He chides Prospero’s lust for power whose exercise damages their world and should, therefore, be renounced. This renunciation becomes Prospero’s doorway to the forgiveness he willingly (if suddenly, as written by Shakespeare) gives everyone who betrays him. And with Prospero’s most touching line, the play concludes: “The rarer action is in virtue than in vengeance.”

Insight into moral ascendance conferred the powerful should they renounce their power gives the production its resonance, setting it apart from other plays by Shakespeare Peta has mounted.

Whereas “Haring Lear” was a foray into postmodern staging with Shakespeare’s text wholly translated into classic Filipino, and while “D’Wonder Twins of Boac” (Peta’s adaptation of “Twelfth Night”) was a musical that mined interest in the history of contemporary cinema, by weaving history into a coherent and dramatic whole, “Tempest Reimagined” comes across with its own epiphany—this by way of Prospero’s conversion—being struck by lightning as it were, on his road to forgiving—toward mercy that transcends the common forgive-and-forget mentality delivered from bully pulpits by many Catholic clergymen who themselves are products of undigested spirituality.

With the voice of authentic humanity, mercy issues forth from Prospero, his contrite heart proven true, having freed Ariel and Caliban from slavery, cleansed thereby of callousness and selfish cruelty to mankind.

Here, art channels life channeling art—highlighting values that remain true and unchanged over time—humanizing its audience, reminding us of permanent truths encountered within the flux of history.

Viewed in this light, Peta’s “Tempest Reimagined” becomes constructive pedagogy whose relevance will always be felt as the undeniable reality of climate change unfolds.

Calamities like “Yolanda” will recur. They will inflict wholesale and untold death even as the country now stands—fearful victim in the slaughterhouse of a President obsessed, gaming with denial, with his revision of history turning deadlier day by day in its contempt of life, truth, justice and freedom.