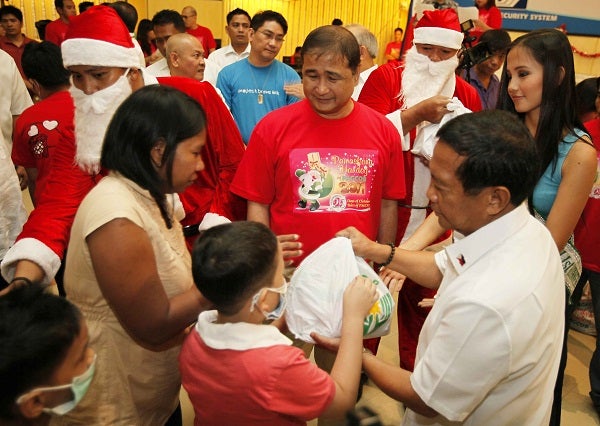 Vice President Jejomar Binay hands over a special Christmas gift pack to a girl cancer patient of ‘Project: Brave Kids’ during the gift-giving ceremony of the ‘Pamaskong Handog ng PAGCOR 2011: 25 Days of Christmas, 25 Years of PAGCOR’ event held Monday at the SSS Auditorium in Quezon City. Beside Binay is PAGCOR chairman and CEO Cristino Naguiat, Jr.

MANILA, Philippines—Seve was only three years old when he was diagnosed with acute lymphocytic leukemia in 2005.

Despite this, he remained cheerful, playful and inquisitive while going through the difficulty of treatment and chemotherapy.

It was in November 2005 when his parents—Paul and Sigfrid Perez—brought him to the Philippine Children Medical Center’s (PCMC) in Quezon City for an inthrathecal procedure.

“We regularly go to a private hospital but for some stroke of heaven perhaps, our doctor recommended us to have that procedure in PCMC. That single visit jolted us, for we saw with our very eyes the difficulty of fighting cancer in a government hospital,” Paul recalled.

Inspired by their own son’s battle, the couple and some friends decided to establish “Project: Brave Kids” and partnered with PCMC in helping assist children with cancer and their families.

The organization is currently supporting more than a hundred indigent families whose kids are being treated at the PCMC in Quezon City.

“Project: Brave Kids” has become the fourth beneficiary of this year’s project of the state-owned Philippine Amusement and Gaming Corporation’s (Pagcor) dubbed as the “Pamaskong Handog ng Pagcor 2011: 25 Days of Christmas, 25 Years of Pagcor.”

The donation, Pagcor said, will be used to cover the cost of medicines for chemotherapy, blood component transfusion and other supportive therapy specifically antibiotics for indigent cancer-stricken patients of the foundation.

Naguiat said the agency was able to set aside a substantial budget for the project because of its cost-saving measures, which are in line with President Benigno Aquino’s “tuwid na landas” principle in governance.

Naguiat promised that Pagcor’s assistance to “Project: Brave Kids” would not be the last.

The state-own gaming firm is currently coordinating with PhilHealth and other agencies of government to study the possibility of putting up a fund that will be sourced from Pagcor’s income to help poor patients with devastating illnesses.

Among the “Project: Brave Kids” wards that will benefit from Pagcor’s P1.5 million donation is five-year old Katrice Aluit, who was diagnosed with leukemia last year. She will continue to get free chemotherapy medicines from PCMC and “Project: Brave Kids” through the financial aid given by Pagcor to the foundation.

Nathaniel Castaneda, who was barely two years old when diagnosed with leukemia, will also benefit from Pagcor’s financial aid to the foundation.

Nathaniel’s mother, Marissa had to quit her job as seamstress to be with him during his chemotheraphy sessions at the PCMC.