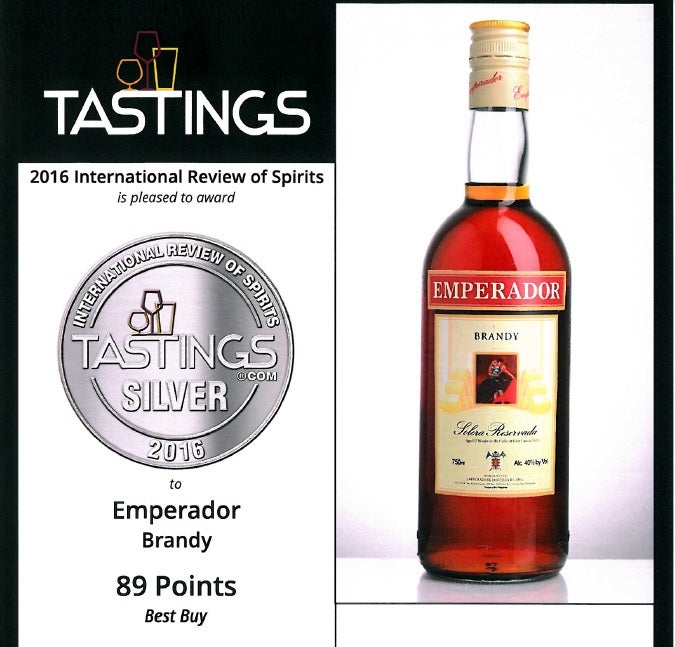 Emperador is the only Filipino brandy to be included as one of the best brandies in the world with Solera and Emperador Light.

Emperador bags two awards at the 2016 International Review of Spirits

The Philippines’ largest liquor company and the world’s largest brandy maker Emperador Inc. bagged two awards at the 2016 International Review of Spirits. Organized by Beverage Testing Institute in Chicago, Emperador was the only company in the Philippines to be included as one of the highest-rated brandies in the world.

From the 14 winners under Dark Brandy category, Emperador Solera Reservada won the silver award (highly-recommended), with added special recognition as “Best Buy”, by garnering 89 points while Emeperador Light received the bronze award (recommended) with 83 points. The “Best Buy” recognition is an added excellence award and it is only given to the spirits or wines that provide uncommon value.

Some of this year’s winners under the same category came from US, France, Georgia, Moldova, Mexico and France.

The Beverage Testing Intitute also made blind tasting reviews on some of the best liquors in the world such as Jura, Johnnie Walker and Dewar’s of Scotland, Bacardi of Puerto Rico, Jim Beam of US, and Jägermeister Liqueur of Germany.

“The silver and bronze awards and one very rare recognition prove that Emperador is deeply rooted in the principles of making high quality and excellent wines and spirits. We are very proud because we are the only Philippine liquor company to receive such recognition and to be included in the ranks of the best brandies in the world,” said Winston Co, president, Emperador Inc.

The Emperador Solera Reservada was reviewed as having a medium amber color. “Aromas and flavors of caramelized nuts, tiramisu, honey butter, and mocha with a silky, bright, dry-yet-fruity medium body and an effortless, interesting, medium-length latte and tres leche cake, milk chocolate, delicate spices, and cola finish. A very tasty and inviting brandy that is sure to please,” says Jerald O’Kennard, director of Tastings.com

The awards was based on the points system, which is modified to a 100-point scale. This was conducted through a series of blind tasting tests by the Beverage Testing Institute’s panel of highly-experienced wines and spirits tasters and tastemakers from around the world.

Emperador Inc. is a holding company of tycoon Dr. Andrew L. Tan, which operates an integrated business of manufacturing, bottling and distributing distilled spirits and other alcoholic beverages from the Philippines and Europe.

Emperador Brandy holds the position as the world’s largest brandy by volume. It expanded its brand footprint outside the Philippines and it is now being distributed in 40 countries across Asia, North America, Africa, Middle East, and Europe.

Whyte and Mackay has a rich heritage of a Scottish spirits company, which is the fifth largest Scotch whisky manufacturer in the world, and its products are distributed in over 50 countries. And with Emperador’s most recent purchase of the brandy and sherry business from Beam Suntory (Bodegas Fundador), completed in February 2016, the company has fortified its brandy and sherry business, and has strengthened its overall liquor business.

As a global company, Emperador Inc. is now able to capitalize on its worldwide distribution network catapulting its full range of brandy and whisky products led by Emperador and Fundador brandy as well as single malt whisky The Dalmore and Jura plus Whyte & Mackay and John Barr blended whiskies.

This month, Emperador bought Domecq and the wine business of Mexico’s Pernod Ricard, which makes brands including Absolut Vodka and Chivas Regal. ADVT.