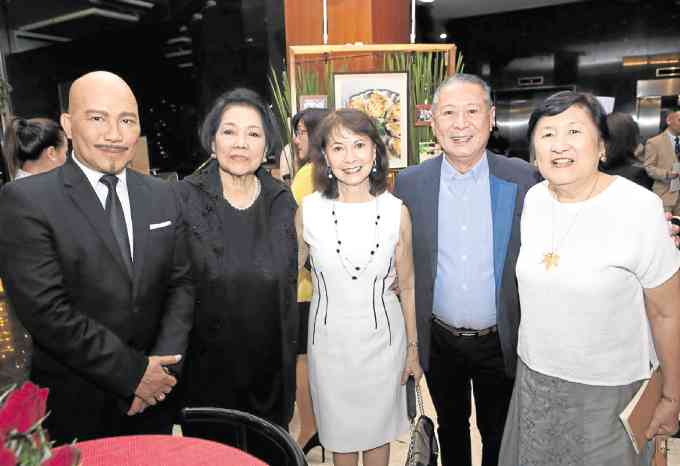 That Glenda touch: 40 years of menus and memories

Most of the materials sent to help me organize and write the book “Via Mare: 40 Years of Iconic Events Through Recipes, Menus and Memories” were about the restaurant’s founder, Glenda Rosales Barretto.

Two thank-you notes from former Foreign Secretary Carlos P. Romulo aptly described how people regard Barretto: “You are the life of Via Mare and certainly you are indispensable to that organization.”

And the personal care she gives catering services, the extra attention to details, and her imaginative solutions, Romulo called them “Glenda’s touch.”

That “touch,” however, isn’t gentle. She is strict about achieving quality in cooking and service. She asks her cooks to repeat a preparation if she deems it not at par with the taste she wants.

One who works with “GRB” or “Mrs. B”—the names she is called in her office—commented how Barretto “has a good sense of taste for food (but) hindi puwede yung ‘puwede na’ (she won’t settle for ‘it will do’).”

Not only does she direct people, she also does the actual work, like wrapping lumpia for the umpteenth time or plating at Malacañan receptions.

The “touch” also speaks of her ideas, how she constantly experiments to present Filipino food in a creative way and to meet international standards.

Among her innovations is the paella-stuffed lechon; tinola flan that is inspired by the Japanese chawan mushi; balut surprise, or fermented duck’s egg served in a pastel sauce under a crust.

The “touch” is in the artistry of presentations—soup served in carved fruits like papaya or squash; menus printed on sheer piña cloth; crab meat with scallops of mango.

Her memories of the Samar kitchen and the daily and special cooking of her mother, Prescilla, remain vivid—the flavors, how every dish was made, the aroma she woke up to or which greeted her as she came home from school.

She even included her mother’s stingray recipe in the first Via Mare menu.

Barretto started out in the food industry as press relations person at D&E and Sulo Restaurant, both owned by Trinidad and Modesto Enriquez. Blanche Gallardo, lifestyle editor of Asia Magazine in the ’60s, recalled that she and Barretto worked together on a feature story for Sulo.

My own experience as a novice food writer was how Barretto made sure I had the best vantage point watching aspirants in action in the early years of Chefs on Parade, the culinary competition of the Hotel and Restaurant Association of the Philippines where she was one of the officers.

Barretto recalled how in the restaurants of the Enriquezes, she gravitated to the kitchen to watch the cooking, help with dispatching, and tag along with the catering crew. These experiences came in handy when she herself got into the restaurant business.

“I wanted a seafood restaurant,” she recounted. “There were many names to choose from, but ‘Via Mare’ really said it for me.”

In a restaurant branch, there is a large photograph of several chefs posing at the Bocuse d’Or, the prestigious

international culinary competition created by Paul Bocuse in Lyon, France. In the middle is Barretto, the only woman and only Filipino who served as judge in the 1989 edition.

On that trip, she loved having a breakfast of oysters in the Lyon market.

It is her love of eating which friends and colleagues marvel at. She exudes bliss—partaking of a perfectly grilled fish or a slice of pan-fried foie gras. It is that kind of pleasure that she wants diners to experience in her restaurant.

Catering takes up much of her time—she makes the menu, tests the recipes, fine-tunes the presentation. It can either be grand such as international conventions and conferences, or intimate like private parties.

And she really enjoyed experimenting with food in the company of icons like Doreen Gamboa Fernandez, who asked her to recreate 19th-century Filipino dishes based on the recipes of Juliana Goricho de Pardo de Tavera.

Her precious time away from work is spent with cousins and friends who travel with her—but where food is still the main agenda, part pleasure and part research, excitement and curiosity combined.

She gets embarrassed that people in the industry regard her as an icon and call her “the Glenda Barretto.” I know she will also laugh and take it as a joke.

But she’s serious about the people who have made her what she and Via Mare stand for today, as it is documented in the book and presented to guests at the launch. Among them was Vic Lim, who wouldn’t stop until Barretto agreed to do the catering for his silver wedding anniversary.

There was First Lady Imelda Marcos, who not only prodded Barretto to do banquets for heads of state and international guests, but also encouraged her to serve Filipino food. Imelda would recall dishes she had on her various trips, for Barretto to replicate.

There was then Tourism Secretary Mina Gabor, who was instrumental in showcasing Filipino food and artistry in world expositions in Spain, Portugal and Japan.

Among those who know Barretto up close and personal, her story will continue and may require another book.