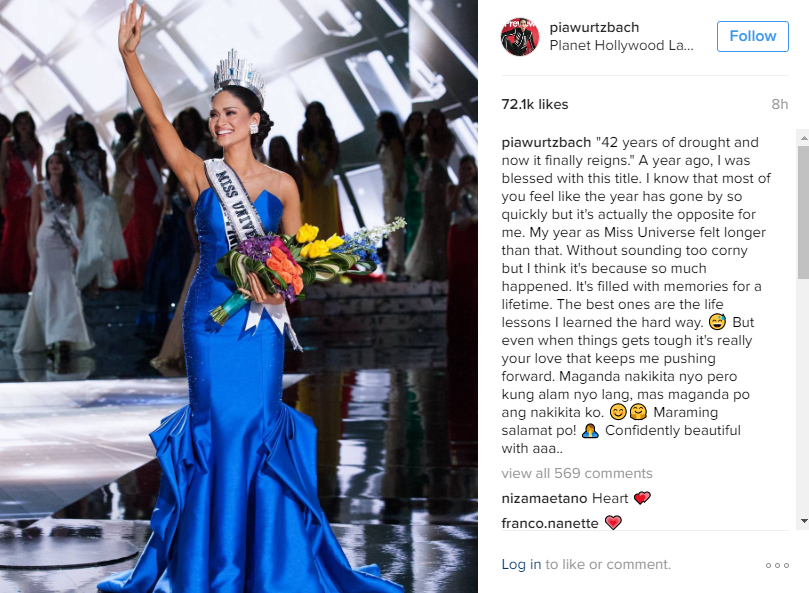 Almost a month before she relinquishes her crown, reigning Miss Universe Pia Alonzo Wurtzbach has taken a trip down the memory lane as she looks back at the night that changed her life forever.

In a series of Instagram posts, Wurtzbach recalled how bringing home the Miss Universe crown for the Philippines after 42 years of drought was a “childhood dream come true.”

Wurtzbach also shared tidbits on the coronation night with her followers, including how she ate a lot of cookies backstage before the question and answer segment so she would look happy on stage.

She said she also ordered a box of pizza for herself as a “reward” and “celebratory meal” after passing the swimsuit competition.

“Throwback to the night that was about to change my life forever. Coming into the competition, I was ready to do my best to make my childhood dream come true. I really wanted to be Miss Universe. But as I was doing the years of training prior that night, I realized that there was something more to attain here than personal achievement. I wanted to proudly represent the Philippines and bring back home the crown,” Wurtzbach wrote.

“A year ago, I was blessed with this title. I know that most of you feel like the year has gone by so quickly but it’s actually the opposite for me. My year as Miss Universe felt longer than that. Without sounding too corny but I think it’s because so much happened. It’s filled with memories for a lifetime. The best ones are the life lessons I learned the hard way,” she added.

The beauty queen also paid tribute to Filipino designers and shared the story behind her blue Albert Andrada gown, which she said almost did not make it to the coronation night because of flight cancellations due to bad weather in Manila.

“It’s about time for Filipino designers! Months before competing I thought about what change I can do to the Bb Pilipinas organization to improve and help future Miss Philippines. It didn’t take long before I made a promise to myself that after years of not really having a choice on our final look, it’s about time we show a Filipino made gown. Especially at Miss Universe. Tangkilikin ang sariling atin, diba po (Love your own, right)?” she said.

“But then this blue gown finally makes it 2 days before the final night. And with a little lambing I’m finally getting Madam Stella’s (national director) permission to wear Filipino designers. Years of saving my brownie points from Madam Stella and she finally agreed. But on one condition, ‘Just make sure you win.’ After all the drama and getting doubted for my color of choice, I stood by my gut feel and advanced to the next round,” Wurtzbach added.

Wurtzbach is set to pass her crown during the Miss Universe coronation night at the Mall of Asia Arena in Pasay City on Jan. 30, 2017. YG/RAM