It’s that time of the year when Dusit Thani Manila opens the Yuletide by unveiling its Family Tree project. Top families are asked “to join in this Christmas endeavor, by providing their very own symbolic Christmas Tree, which best evokes the family they represent,” explained très charmante hotel GM Prateek Kumar.

The hotel also invites all its guests as well as Facebook fans to cast their votes for the best Christmas tree. The top three winning trees will get cash prizes and share in donating P350,000 to charity from their prizes.

“With each family’s endearing story to tell, as translated in the design of their Christmas trees, it is Dusit Thani Manila’s hopeful wish that a sparkle of hope will be bestowed on all mankind through the message each Family Tree brings,” said Danell Palang, Dusit Thani senior manager and public-relations officer. 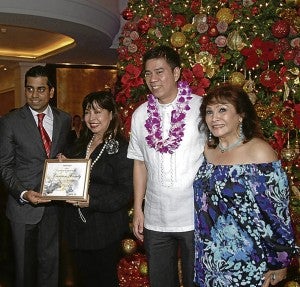 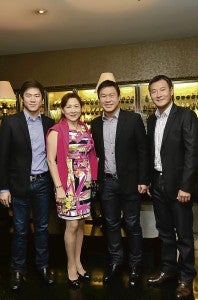 Altruism and charity are very much in the air as Pernod Ricard Philippines Inc., the exclusive importer and marketer of the prestigious brand Chivas Regal, natch, partnered with Republiq, top resto and dance club, to raise funds for Manila Boystown Complex.

Marc Rosales, marketing manager of Pernod Ricard Philippines Inc., urged “support and encouragement for this cause.” He awarded the initial donation to Porras.

During the launch, all Chivas Regal sales for the night went to the educational gear, shoes and basic medicines of the residents of Manila Boystown.

Faster than you could bat an eyelash, the loads of invitees made a mad rush to purchase bottles so as to give to charity. Bravo!

The rest of the night, the stars twinkled brightly as celebrities, and VIP’s celebrated the spirit of brotherhood and selflessness, since every purchase of Chivas Regal guaranteed a better future for the boys of Manila Boystown.

Now, let’s drink to that, palanggas.

Some of the country’s world-class performers delighted clients of the Bank of the Philippine Islands (BPI) at Makati Shangri-La Hotel when the bank hosted a super-special gala night in celebration of its 160th year anniversary. Theme was “Beyond the Legacy,” emphasizing the bank’s goal of going beyond its legacy of providing Filipinos with excellent banking innovations.

Also performing were “Opera belles” Cris Villonco and Rachel Gerodias, with Primo. Together with Mata, Candice Adea and JM Cordero, they joined the Manila Philharmonics Orchestra and 92 AD in an impressive number.

The excellent night of music showed what BPI’s continuing legacy was all about, n’est ces pas, palanggas? It’s the biggest and most dazzling happening on the first day of December, dahlings.

Marking the opening of the Christmas season in the Philippines is the University of Santo Tomas’s (UST) grand Christmas Concert Gala on Dec. 1, 7 p.m., at the UST Chapel.

Making this year’s concert extra special is the celebration of the 400th founding anniversary of UST. It will open with the ringing of the UST Carillon Bells and the playing of classical Christmas carols.

Afterward, we will all be welcomed by no other than Fr. Rolando de la Rosa, Rector Magnificus of UST, and the two dynamic gentlemen who are dedicated to this cause, investment banker Andrew Gan and international renowned interior design Jonathan Matti, dahlings.

This year’s beneficiaries are the UST Heritage Conservation Society and the UST Conservatory of Music. The concert is presented by such charity- and culture-oriented personalities such as Vicki Belo of the Belo Medical Group and the leadership of San Miguel Corp., palanggas.

Be there and do your contribution for a great cause. I know I’ll be there, palanggas.

Hey, palanggas, be the first to discover The Sulo Riviera on Dec. 3 as it finally opens its doors to show us the new look of this famous hotel right in the center of Quezon City’s principal business and commercial hub. The Sulo Riviera now carries a transformed look that will truly redefine every guest’s experience.

Its new ownership is led by executive director Cristina Cuevas, who said, “We of Sulo Riviera has transformed it into a chic boutique hotel that carries 71 enthralling Superior and Deluxe rooms and suites. Each room boasts of unparalleled modern interiors influenced by exotic contemporary Malayan structures and design.”

Check it out and see for yourself the Sulo Riviera, on Matalino Road, Diliman, Quezon City.