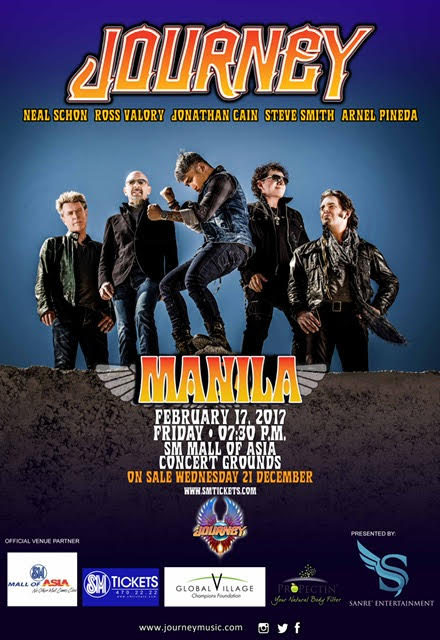 Rock and Roll Hall of Fame inductee Journey to perform in Manila Feb. 17, 2017

This is the second time the band will be playing in Manila; the first was in March 2009 at the same venue.

Formed in 1973 in San Francisco by former members of Santana (Neal Schon, Gregg Rolie) and Frumious Bandersnatch (Ross Valory), Journey’s popularity peaked between 1978 and 1987—marked by a series of hit songs including “Don’t Stop Believin’” (1981) from the album “Escape,” which went to No. 1 on the Billboard 200 and yielded another single, “Open Arms”

Its 1983 follow-up album, “Frontiers,” went to No. 2. Journey enjoyed a successful reunion in the mid-’90s and later regrouped with a succession of lead singers until Schon discovered Pineda on YouTube.

Journey’s coming Manila concert will be held two months before the band is inducted into the Rock and Roll Hall of Fame in New York.

In an interview with Rolling Stone on the Rock Hall of Fame induction, Schon (lead guitar) said: “I think one of the reasons the band keeps getting larger and larger is because we’re out there every year. We’re playing and digging in and doing great performances.

“Our fans are loving it. We’re getting new fans every day and playing to much younger audiences. It’s really wild when I look out and see like four generations of people now, some that have been with us forever and some that are so young I can’t believe it. It must have been their parents that were fans of us and maybe they get turned on from “Glee” and got curious. It’s very cool to look and see that. It’s inspiring.”

For his part, Pineda said: “I’m excited to perform again for my fellow Pinoys. It’s very special to me.”

The rest of the band is composed of Valory (bass), Jonathan Cain (keyboards), and Steve Smith (drums).

The concert is part of an Asian tour that also stops in Japan, Singapore, Malaysia,Hong Kong, South Korea and Taiwan.

Tickets went on sale on December 21 and can be purchased through SM Ticket Outlets or www.smtickets.com. Tel. 470-2222