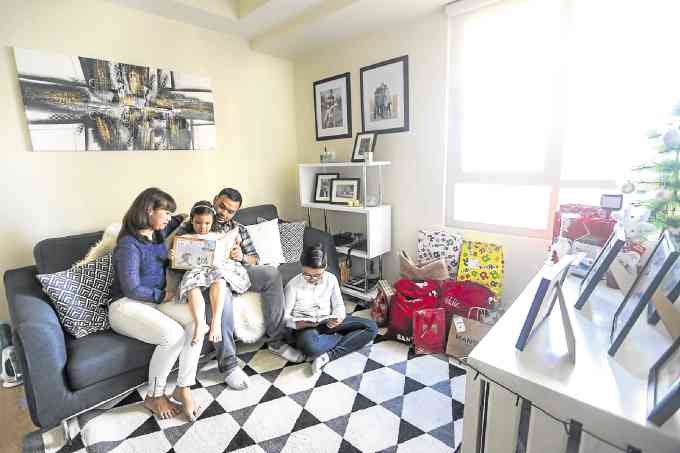 A family’s first Christmas at The Grove: There’s lasagna–and that Great Lawn

The sounds of frisky puppy paws on a wooden floor greet visitors at the home of the Bautista family. Arbi, his wife April, their two children Kyle and Addie, and the family’s dogs, Theo and Percy, a Jack Russell Terrier and a black Pomeranian, moved into their three-bedroom unit at The Grove Rockwell only six months ago.

This will be their first time to celebrate Christmas as a family, just the four of them—and the dogs, of course. “We usually fly to Tacloban on Christmas Day to visit my mother and relatives,” said April. “We’re there until New Year’s Day before we fly back to Manila, but this year will be different.”

The young mom who works from home plans to prepare the family’s Noche Buena, with help from Arbi, who’s in charge of the “heavy lifting.”

“I do the frying and then if April needs help rolling out stuff, I’m always on hand,” he said. “I’m also the one preparing the ham.”

But isn’t the ham already cooked? “Yup, that’s why I’m in charge of that,” he joked.

April already knows what she’s preparing. “They love my lasagna so that’s what I’m cooking. I also plan to make my Mom’s cheese rolls, although I hope it will be as good as hers,” she said.

They like The Grove because they can choose to keep to themselves, but also have the option to socialize. “We really made it a point to get all the Christmas parties out of the way early on so we could just celebrate the actual day by ourselves.”

“What really struck me when I first saw the property was the shared amenity deck,” Arbi recounted. “Aside from the swimming pools which most condominiums offer, there was this wide stretch of grass called the Great Lawn, where my kids could run around and play. You don’t find that everywhere.” April lamented how there are few parks in the city where children could play.

“We also get to walk our dogs during specific times of the day,” she said. That’s why the Bautistas chose Rockwell over other property developers. “My husband and I are both dog lovers; we couldn’t imagine not living with our dogs,” April said. Theo and Percy are balls of furry energy who look forward to their daily walks outdoors.

The vast open space in secured surroundings, the homey atmosphere even in that vastness that allows you to enjoy not only your family but also your beloved pets—this family luxury is what the Bautistas find in The Grove, which they realize other inner-city developers can’t provide as well and as meticulously.

“We’re happy in our new home because it’s centrally located. Arbi works in Taguig but also goes to his firm’s Quezon City office. My 10-year-old son Kyle is a student at La Salle Green Hills while his sister studies at Immaculate Conception Academy,” she noted.

On weekdays, April wakes up early to see her kids off to school, but she then gets more shut-eye once they leave. “My son used to wake up before 5 a.m. so he could get to school by 6:45 in the morning. Now, he gets to sleep an extra hour because the drive to school is just 10 minutes on a good day.”

April works from midmorning to lunch, when Addie comes home. “My kids are very energetic. Addie goes to ballet class while Kyle has baseball practice M-W-F. I help out with their homework in the evenings.”

With the Bautista family now making a real home at The Grove, it’s bound to be truly a first Christmas to remember.