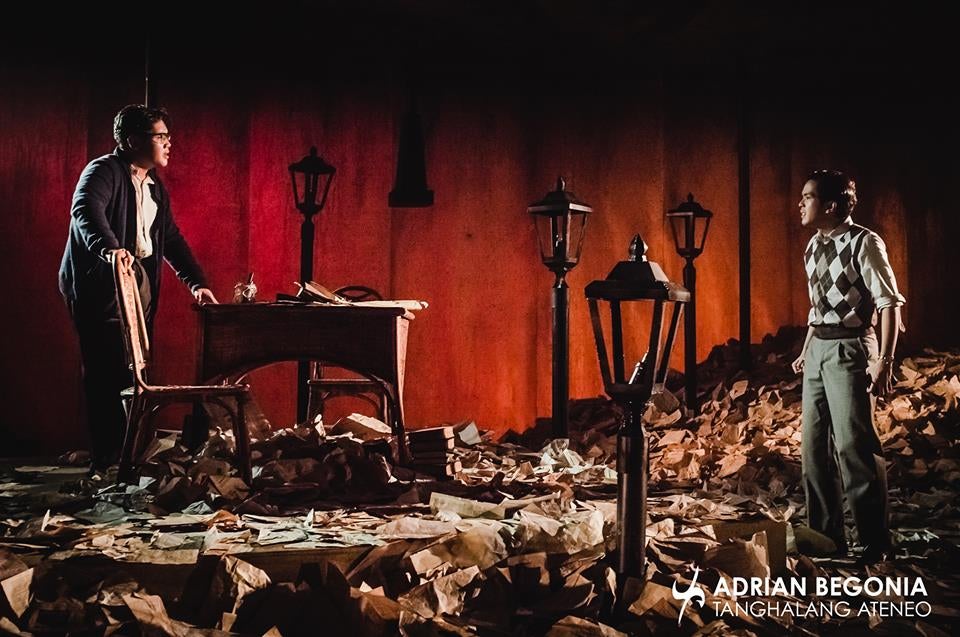 Yearend lists, film critic Richard Bolisay wrote early this year, are only “the writer’s vain idea of playing favorites and revealing his ‘preferences…’” So it goes with theater.

There came a point back in September when it was no longer possible for me to see everything on offer. There was the sudden inclusion of “The Wong Kids in the Secret of the Space Chupacabra Go!” in Tanghalang Pilipino’s season.

Also, as a livid, middle-finger response to the Duterte administration’s unsurprising complicity in the Marcos burial issue, the “Never Again: Voices of Martial Law” mini-festival of one-act plays was assembled in less than two months, and ran alongside Guelan Luarca’s adaptation of Lualhati Bautista’s  “Desaparesidos.” All of which I missed.

Still, the 64 productions I saw this year—not including dances such as Ballet Philippines’ “Firebird and Other Ballets” and concerts like the Triple Threats series at the Cultural Center of the Philippines—yielded a fine sampling of top-10 worthy titles.

Musical theater, in particular, enjoyed a better year compared to last, and that’s not even counting the returning productions of “Mabining Mandirigma” and “Rak of Aegis” or the international tours of “Les Miserables” and “50 Shades! The Musical Parody.”

A list that goes beyond 10 would automatically include, for instance, George de Jesus III’s harrowing, in-your-face adaptation of “The Pillowman” for Egg Theater Company; or “The Dressing Room: That Which Flows Away Ultimately Becomes Nostalgia,” Dulaang Unibersidad ng Pilipinas’ most accomplished piece since “Ang Huling Lagda ni Apolinario Mabini” two years ago.

1. “Kalantiaw” (Tanghalang Ateneo). It was a celebration of everything that theater should represent: ingenuity, imagination, panache where it matters, and that rare ability to overcome so many odds given so little. More importantly, its subject—one of the biggest hoaxes in Philippine history—could not have been timelier, what with the rising tide of historical revisionism plaguing this country.

2. “Constellations” (Red Turnip Theater). A show of marked intelligence, emotional depth and humanity, this two-hander about lovers swimming through multiple possibilities in the multiverse was foremost an irresistible display of its actors’ tremendous range and never once strayed into self-indulgent territory.

4. “Fun Home” (Atlantis Theatrical Entertainment Group). Shaped as a graphic cartoonist’s attempt to fathom the tangles of her youth, “Fun Home” rendered the act of remembering with piercing clarity. No answers guaranteed, but the boulder it left on your chest by curtain call was its welcome brand of catharsis.

5. “Almost, Maine” (Repertory Philippines). A thoughtfully realized, captivatingly told gem of a production, held together by Bart Guingona’s restrained direction and his first-rate quartet of performers, who dove straight to the whimsical heart of John Cariani’s collection of vignettes.

6. “Jersey Boys” (Atlantis Theatrical Entertainment Group). A song-and-dance spectacle that fluidly transitioned from one stunningly sung number to the next, “Jersey Boys” was one of those shows that had you thinking, “Can anything go wrong with it at all?”

7. “Boy” (Tanghalang Ateneo). In telling the story of a boy who was intentionally raised as a girl, and the tragedies that followed, “Boy” captured sadness as neither exaggeration nor frailty, but simply an all-too-human attribute, making sure the viewer fully understood the consequences such great unhappiness entailed.

9. “Tribes” (Red Turnip Theater). A mesmerizing, altogether powerful play about the gravity of human bonds, touch, words and the pauses we leave in between. If you think you’ve seen enough variations of the family-under-fire drama, think again.

10. “Ako Si Josephine” (Cornerstone Entertainment/ABS-CBN Events). Its inherent cuteness notwithstanding, “Josephine” was a vitalizing addition to the jukebox-musical landscape, selling its transfiguration of Yeng Constantino’s music with aplomb while also speaking truth—in ways rambunctious yet subtly unnerving—about the state of our nation.

Expanding the slate below would include, to name a few, the unembellished lead turns of Kalil Almonte in “Tribes” and Blanche Buhia as the searing center of “Ang Sugilanon… ni Epefania.”

In the case of Jonathan Tadioan and Marco Viaña, the victory was thrice as sweet: They top-billed the Labfest’s “Mula sa Kulimliman” and “Daddy’s Girl,” respectively, and were also featured in Tanghalang Pilipino’s “Pangarap sa Isang Gabi ng Gitnang Tag-araw” and a perceptively staged translation of Anton Chekhov’s “Uncle Vanya.”

In musical theater, there were Tanya Manalang bringing a true musical theater voice to “Rak of Aegis”; a trifecta of heart-wrenching performances by Mikkie Bradshaw-Volante, Cris Villonco and Lea Salonga in “Fun Home”; and three more delectable star turns, from Via Antonio (“Ako si Josephine”), Carla Guevara-Laforteza (“3 Stars and a Sun”) and Bituin Escalante (“Stepping Out, The Musical”).

In order, the year’s 18 most noteworthy pieces of acting:

1. Mayen Estañero (“Mula sa Kulimliman”). Her portrayal of an ordinary housewife who discovers her husband is of another world was the pinnacle of tragicomedy—an actress giving the performance of a lifetime in a play that matched the magnitude of her abilities.

2. Sheenly Vee Gener (“Ang Mga Bisita ni Jean”). As a former revolutionary coming to terms with love, loss and the demons of her past, Gener delivered a consummate portrait of womanhood devoid of glitz or vanity.

3. JC Santos and Cris Villonco (“Constellations”). In a play that bent time, space and the laws of physics, they were “a pair of stars on terra firma,” I wrote back in February. Transformative, moving acting through and through.

4. Missy Maramara (“The Dressing Room: That Which Flows Away…”). Hell hath no fury like an actress scorned—or threatened: That was the gist of Maramara’s larger-than-life performance. Her character owned that play, and she owned that stage.

6. Angela Padilla (“Tribes”). Amid the deafening noise and silences of that quirky household in “Tribes,” she was the refreshing ray of reason and clarity, and this cerebral story’s most human touch.

7. Nyoy Volante (“Jersey Boys”). The role of Frankie Valli earns the spotlight only in the show’s last quarter, yet Volante had your attention from the moment he let out that pitch-perfect falsetto. By the time he finished his show-stopping rendition of “Can’t Take My Eyes Off of You,” you knew this was no mere impersonation; this was the year’s finest musical theater performance.

8. Jef Flores (“Tick, Tick… Boom!”). He was a divine, charismatic Jesus in MusicArtes, Inc.’s “Godspell,” but it was here, in the unglamorous part of a struggling musician, that Flores really distinguished himself as musical theater’s newest leading man. Plus, anyone who can squeeze the rock out of Jonathan Larson and make it sound so effortless deserves our attention.

9. Ricci Chan (“Ako Si Josephine”). Playing the despot in “Ako si Josephine’s” dystopia, he single-handedly lifted the show to epic heights of kabaklaan and brought the house down by sheer force of taray. He was your bes, mars, mudra, gurl and frenemy all squeezed into a crowning performance worthy of the world—the universe, rather.

10. Trency Caga-anan (“Titas of Manila”). As the young-at-heart tita, the one who’s had enough of cheating husbands and cheap divorces, Caga-anan was a riot, all limitless spunk and fiery sensuality.

11. Mako Alonso (“Suicide, Incorporated”) and Vince Lim (“Dog Sees God: Confessions of a Teenage Blockhead”). We owe Twin Bill Theater for these two breakout performances. The roles—a suicidal young man and a reclusive pianist—may be depressing as hell, but Alonso and Lim surprised us with their sharp, beguiling turns.

12. Cholo Ledesma and Camille Abaya (“Boy”). Two years ago, they already evinced much promise in “Rite of Passage.” In “Boy,” where they expertly juggled parts obviously way beyond their age, they proved themselves more than ready for professional theater.

13. Bodjie Pascua (“3 Stars and a Sun”). Only a true veteran of the stage such as Pascua can convincingly play a hermit who stops the show cold with a rollicking History-of-the-Philippines rap number.

14. Michael Williams (“Dirty Old Musical”). As a former boy-band member who has come to terms with his identity, Williams was a hoot. His entrance was one for the ages: red jacket, red shoes and Ryan Cayabyab’s “Kay Ganda ng Ating Musika” at the ready.

15. Reb Atadero (“Almost, Maine”). His “underacting,” in a production that largely eschewed acting pyrotechnics, worked wonders: His characters emerged the most tangible and believable. That’s discipline.

This is a pretty small circle, as one is bound to discover over the course of assiduous theatergoing.

For example, two of my picks for the year’s best shows—“Constellations” and “Changing Partners”—were both directed by Rem Zamora. And probably no other director hereabouts has a better grasp of the contemporary American musical than Bobby Garcia (“Jersey Boys” and “Fun Home”).

This field, however, was defined this year by a pair of young names. The first is Topper Fabregas, who, since making his directorial debut in “Rabbit Hole” two years ago, has really come into his own. In “Tribes,” his finding of harmony amid the chaos allowed the work to soar and become, as my colleague Cora Llamas wrote, “compelling, consequential theater.”

And the second is Charles Yee, whose enthrallingly stylized work for “Kalantiaw” and “Ang Sugilanon… ni Epefania”—both deftly marrying the mystical with plaintive ordinariness—marked him out as primed for the big leagues.

1. Leslie Dailisan’s choreography for Artist Playground’s “Happiness Is a Pearl”—elegant, expertly calibrated movement within very limited space. At one point, I found my face within inches from an actor’s stiletto.

5. In “Tribes,” the house of a family of academics believably constructed and furnished by Lacson and lit with strategically placed lamps by John Batalla.

6. “Boy” as a technical feat of small, seemingly insignificant design details cohering into a functional whole: the sound by Teresa Barrozo (her best work to date), along with Lacson’s set (again!) and Barbara Tan-Tiongco’s lights.

Two Saturdays ago, I saw the international touring company staging of Tanghalang Ateneo’s “Sintang Dalisay,” along with maybe less than 30 other audience members. That its one-weekend run was little seen is a tragedy in itself.

Despite being a tremendously pared-down version of the original, this production was nevertheless a transfixing, artfully mounted piece. The cherry on top was watching the cast—a reunion of sorts of the best of the company’s most recent alumni—run the show with aplomb. Rerun, please! —CONTRIBUTED