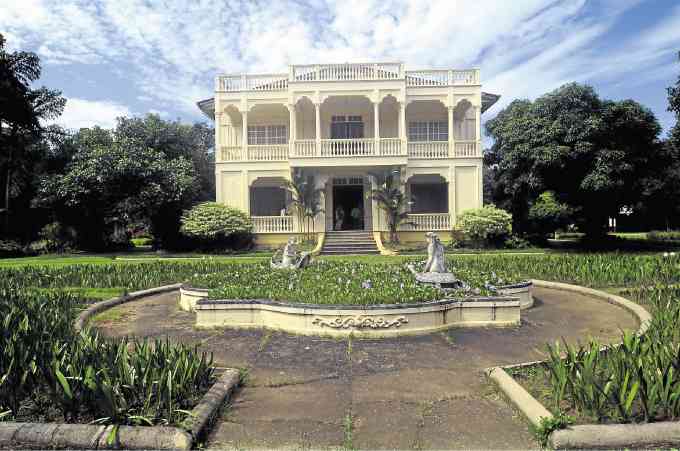 The Ilonggos’ perceived boastful nature is encapsulated in that statement “Ang kwarta sa amon gina-piko, gina-pala” (In our place, money is handled with pickaxe and spade).

It’s an overstatement, of course, bordering on urban legend—but it should be clarified it may probably apply to the Ilonggos of Negros. Because the Ilonggos of Panay are among the most laidback people in the country, while Negros is a land of extreme wealth and extreme poverty.

Negros Occidental being the country’s highest-income province naturally breeds this polarity of extremes, turning the place into a hotbed of rebellion. It is the Sugarbowl of the Philippines, with 15 centrals producing more than half of the country’s sugar output.

When sugar was the country’s No. 1 dollar-earner, the Negrenses really lived it up. This was exemplified by the premartial-law annual gathering of prominent Ilonggos, the legendary Kahirup Ball (which the Kapampangan elite’s Mancomunidad tried to rival).

Where else did women change gowns 18 times in one night but in this exclusive society ball? Or wear heirloom jewelry with diamonds as big as gumballs?

When legendary beauty Susan Magalona married Charlie Ledesma, champagne was reportedly flowing from a fountain. A wedding gift was a truckload of peanuts from one of the prankish Lizares boys.

The Negrense lifestyle’s excesses and deprivations can be gleaned in the Negros Museum beside the Provincial Capitol in Bacolod.

In dioramas, murals, artifacts and archival materials, the island’s history is depicted from the aboriginal Ati (or Negritoes, whence came the island’s name) and how Malay settlers drove them to the foothills of Kanlaon (highest peak in the Visayas)—through the sugar boom during the Industrial Revolution, to the sugar industry’s decline in the 1980s, and the fluctuations of the lifestyle that goes along with it.

A large part of the exhibition traces how, after the collapse of the textile industry in Iloilo in the 19th century, the Ilonggo elite moved their capital to Negros across Guimaras Strait and fueled the sugar industry, with the sacadas (migrant sugarcane workers) serving as the backbone of the economy.

Here are scale models of the typical plantation house and the primitive sugar mill called molino de sangre. There are sample lyrics of folk songs such as “Dandansoy,” sung by migrant workers separated from their families across the strait; and “Ay, ay! Pagkakapoy” (Oh, oh! How Weary), sung by sacadas after a back-breaking day.

It is here where the visitor would learn about República Cantonal de Negros. In 1897, revolutionary generals Aniceto Lacson and Juan Araneta waged a psychological warfare. Armed only with knives, bolos, spears, nipa-palm stems crafted to look like rifles, and sawali mats rolled and mounted on carts to look like cannons, they made the Spaniards surrender in a bloodless battle.

From November 1898 to February 1899, Negros was a republic, with Lacson as president and Bacolod as capital.

Bacolod was a coastal village driven uphill by raids of Moro pirates (thus, bakólod, Hiligaynon for “hilly”), and returned downhill only when the slave-trade raids stopped. It became a barrio of Bago, a municipality in 1756, a city in 1938, and was considered highly urbanized in 1979.

Now known for its MassKara festival in October, it is called the City of Smiles.

Bacolod is a relatively young city. Most of its heritage structures were built in the 1930s, while the concentration of Spanish-era structures is in the two neighboring cities to the north—Talisay and especially Silay.

Silay is considered the seat of arts, culture and ecotourism in Western Visayas, thus it is referred to as the Paris of Negros. National Artist Leandro Locsin, mezzo-soprano Conchita Gaston, culture writer Doreen Gamboa Fernandez and society columnist Maurice Arcache are from here.

Of these, probably the most seen and written-about is the Victor Gaston House, popularly known as Balay Negrense. Built 1897, this was the home of the eldest son of Yves Leopold Germain Gaston, the Frenchman from Iloilo who settled here in the 1840s and became Negros’ first sugar baron.

The house has been turned into a lifestyle museum showcasing the grand living of the typical hacendero. It memorializes a time when these people would go around town in carriages driven by Arabian horses. (Decades later, certain luxury cars reportedly could be seen in Negros even before they were out on the market. And the most number of red sports cars were found in Bacolod when red was a status symbol.)

The Mansion on Calle Ledesma, or the Adela Mansion, is an eerie spectacle in Silay. Built in the Neoclassic style in the 1930s, the stately structure had been cut in half, the second floor torn down. Behind this is a story of love and betrayal, the stuff of gothic romances and movies.

A scion has turned it into a café frequented by youngsters. It has a gallery of art installations.

Also somewhat eerie is the José Corteza Locsin House. Built in the ’30s in the Art Deco style, this was the home of Sen. José Locsin, author of the Filipino First policy.

When his four-year-old boy Julio Cesar died, Locsin was “so stricken with grief that he had the body mummified.” He commissioned Guillermo Tolentino to cast a bronze bust of the boy and had it placed on the steps leading to the upper floor.

Talisay, between Bacolod and Silay, was where Negros’ sugar industry began in the 18th century, when an Augustinian Recollect friar propagated seedlings from Spain. Talisay has more of those storied mansions.

The Simplicio Lizares House is of relatively recent vintage but more opulent. Built in the ’30s, it’s a blend of Italianate design and Philippine Art Deco.

The Aniceto Lacson House, or Claparols Mansion, is known to locals as Casa Grande. Built in 1880, it served as the country’s first presidential residence when Lacson presided over Negros’ revolutionary government.

Lino Brocka shot “Gumising Ka, Maruja” in this grand structure with a wraparound verandah and a chapel at its left wing. It is now a derelict building, neglected due to disputes over ownership and management.

Another derelict structure but surprisingly resurrected even in skeletal form is The Ruins, formerly the Mariano Ledesma Lacson Mansion. Built in the early 1900s, it is called the Taj Mahal of Negros because behind its construction is another love story that will be told and retold from generation to generation.

Don Mariano’s great-grandson Raymund Javellana, who manages the place, leads us to the structure’s restricted areas up to the second floor. Designed in Italianate architecture, the mansion has a belvedere and Renaissance-style balustrades. There is a lily pond on the terrace just outside the master’s bedroom. It is a truly capacious place, like a castle.

A replica of the Stonehenge looms at the park’s entrance, where tourists pose for selfies. There’s also a replica of the David by the restrooms on the lawn. Javellana plans to build a boutique hotel beside the souvenir shop, with design inspired by the Colosseum.

This is considered one of the 12 Most Fascinating Ruins in the World. Early this month, it was declared as Best Heritage Destination in the Philippines— beating Calle Crisologo in Vigan; Chocolate Hills of Bohol; Paoay Church in Ilocos Norte; and Las Casas Filipinas de Acuzar in Bataan.

The José Gaston Mansion in Hacienda Rosalia in Manapla town is the typical plantation house, complete with a chapel. Built in 1933, it was home to Leopold Gaston’s grandson.

It was here where Peque Gallaga shot parts of his masterpiece “Oro, Plata, Mata.” Overlooking the wide, wide lawn is the terrace where the infamous mahjong session was filmed.

The Generoso Villanueva Mansion, or Balay Daku (Big House), is a landmark on Burgos Street, Bacolod’s Millionaires’ Row. Political and business rivalry fueled Don Generoso to build this three-story mansion in 1933—the first Art Deco house constructed in Bacolod, and the tallest structure in the city until 1959.

Gracefully designed like an ocean liner, it is known to locals as the Boat House. It has porthole windows, viewing decks, a sweeping salon with elaborately patterned hardwood parquetry, endless corridors with walls of Venetian finish, and a staircase that spirals like the inside of a conch shell. It is considered the most beautiful Art Deco house in the country.

An astonishing feature is an orchestra pit on the terrace overlooking the front lawn. Here Bacolod’s 400 used to party.

An unlikey heritage structure can be found in the Central Market amid sordid scenes of traffic and hawking. When fire razed downtown Bacolod in the mid-’80s, only one structure remained relatively intact.

It was a government building built in the ’30s, and though made mostly of wood, its Art Deco features are astonishingly well-preserved.  “No Smoking” signs can be found all over the place.

Juicier stories await in Silay Cemetery. Divided between the Church-owned and the public cemetery, it is respectively divided between prominent residents and ordinary citizens.

A whole-afternoon tour of the 14-hectare place has a local guide that can elaborate on these families’ interweaving stories, their wild eccentricities, shame and scandals, quarrels and reconciliations—which family stole another family’s heirloom recipe of napoleones (puff pastry popularized by Roli’s bakeshop of Bacolod); which society matron belittled the First Lady’s pearls; or who had to pawn off the family jewels when the sugar industry declined.

A statuary of a female figure prostrate with grief mutely memorializes a mother mourning the death of her little boy, recalling Rachel weeping for her children.

One mausoleum has an empty tomb now mossy with age, with a lapidary stone inscribed in Spanish, which reads: “Where are you, Ester?”

The young woman had been disowned by her family after eloping with a man beneath her station. Her parents and siblings had died and been interred in the family mausoleum but no one knows her whereabouts. A tomb has been set aside for her whenever she returns.

Another mausoleum has a tomb for Yaya Sally, an illiterate woman who didn’t even know her last name. For 54 years she had lived with the family of her master so that when she died they took her as their own and interred her remains in the family mausoleum.

Despite the hacenderos’ social conscience, however, it is their decadence and feuds that have become the stuff of legend.