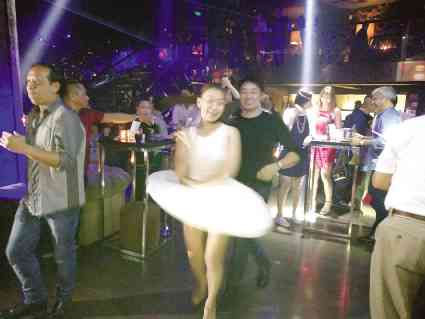 At 11 p.m. the party is just warming up at Privé, an upscale nightclub in Bonifacio Global City (BGC). It’s a Tuesday night, but the place is packed with a mixed crowd of corporate executive types, middle-age couples, society matrons, millennials and a few teenagers.

The music is likewise mixed—’70s disco and ’80s new wave, with old-school rap thrown in. The crowd apparently loves it, cheering DJ Boyet Almazan. The dance floor fills up as a number of partners do the swing.

“It’s ‘Retro Night,’” says Privé co-owner Teddy Dario, noting that this music theme has made the club a favorite destination of an adult demographic group different from the kids and young professionals who come in droves to Valkyrie and Palace Pool Club in nearby Uptown Bonifacio.

It’s been a few months since President Duterte’s war on drugs—criticized for being strictly confined to poor communities—widened its reach to include high-end commercial establishments, especially BGC. Initially, club owners felt that business was suffering because the crowds chose not to step out at night, overcome by paranoia—the fear of being framed by cops or shot by mistake in the wave of extrajudicial killings (EJKs) now plaguing the country.

But on this night, Privé is doing fine, a steady stream of customers entering its doors and the wait staff busy attending to orders for drinks.

On weekends, Privé’s environs, including Chotto Matte, a newly opened Japanese bar, draws a sizeable clientele. Par Sallan, one of the bar’s DJs, is playing classic rock tunes rarely heard anywhere else, while his friends, all passionate music fans, cheer at every segueing song.

Does it mean that people, especially those highly critical of Mr. Duterte’s violent drug war, have learned to worry less and instead engage in recreation without the need to do drugs?

Dario says that, in Privé, “We have an agreement with the Taguig mayor’s office and police to allow regular inspections and surveillance to be conducted by their uniformed and plainclothes officers.”

He and his business partners “support the efforts of the government and the police to keep the nightlife and entertainment industry drug-free, and make it a truly enjoyable experience for our customers.”

Even so, friends huddled at one of the cocktail tables in Privé express fear and loathing of cops going on a killing spree every single day for the past six months.

In the live music scene, two phenomenal developments are worth discussing: how tickets to the Coldplay concert at the SM Mall of Asia (MOA) open grounds sold out in three days when the show date is on April 4, 2017, yet; and why James Taylor canceled his own show scheduled Feb. 25, 2017, at MOA Arena.

Apparently Coldplay’s Pinoy fans have the purchasing power to be able to afford the pricey tickets. These fans belong to the middle and upper classes that are also widely knowledgeable of contemporary music trends. In short, they know what they want.

As for Taylor, sources told Inquirer Lifestyle that the five-time Grammy winner, who has sold over 100 million records worldwide, first read about EJKs in the New York Times which has been publishing a series of articles, including editorials, detailing the graphic violence of the drug war.

It took him weeks of pondering and consultations with friends before informing his manager of his decision to call off his Manila concert.