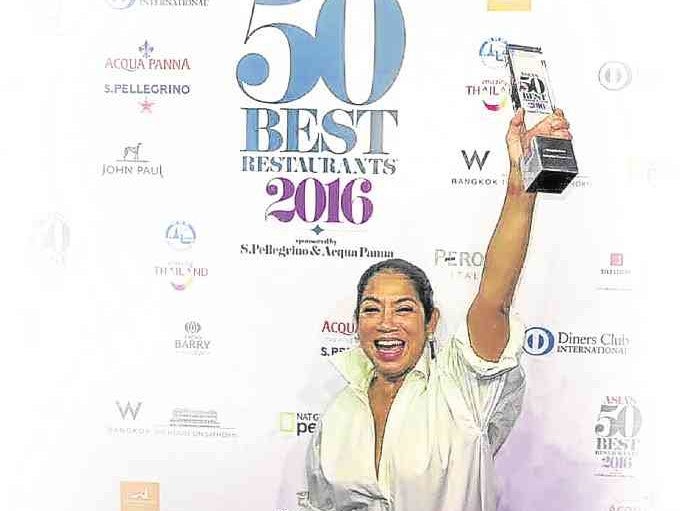 Year 2016 started on the right note for the Philippine food scene as chef Margarita  Fores was named Asia’s Best Female Chef for 2016 by Asia’s 50 Best Restaurants. She was voted by over 300 industry experts from across the region.

This was only the fourth time  the group behind Asia’s 50 Best  Restaurants gave the award, and the first time a Filipino female chef was chosen. Fores was cited for her leadership, culinary skills, dedication and pioneering efforts in elevating the dining scene in the Philippines.

Fores, who recently marked her 30th year in the industry, has been a staunch advocate of Filipino cuisine.

The Center for Culinary Arts, Manila had another milestone early this year by partnering with the prestigious French culinary school, Institut Culinaire Disciples Escoffier, based in Hong Kong.

Escoffier, accredited by the French Ministry of Education, is tasked to handle the culinary classes and programs related to French Cuisine at CCA Manila’s first-ever satellite campus in Salcedo Village, Makati. The pioneering venture between CCA and Escoffier raises the bar in Philippine culinary education; it seeks to provide a highly intensive culinary education for  nonprofessional and professional individuals. Rigorous French cooking is taught by top French chefs or Michelin-star chefs.

He explored the city’s dishes, including sisig, adobo, kare-kare and the  all-time favorite halo-halo. The episode opened with Bourdain’s visit to Jollibee, which he described as “a fast-food wonder.”

Bourdain first visited the country in 2008.

Madrid Fusion Manila 2016, described as the biggest and most important gastronomic event in Asia in the 21st century, was successfully staged at the SMX Convention Center, SM Mall of Asia.

The event, themed “The Manila Galleon: East Meets West,” created an exciting encounter between Michelin-star chefs from the West and the East’s own culinary stars.

From the Philippines, making a buzz were Michael “Miko” Aspiras, Amy Besa and Romy Dorotan and Mike “Tatung” Sarthou.

Tourism Secretary Ramon Jimenez Jr. welcomed the guests to the cocktail dinner at Malacañang and stressed how the Madrid Fusion Manila was designed to help boost the country’s economy and tourism through food. It aimed to put the Philippines on the map as a gourmet destination in Southeast Asia.

The staging of the World Street Food Congress drew thousands of hungry tummies to Bonifacio Global City to enjoy a myriad of street chow from about 25 top international hawkers from India, China, Indonesia, Malaysia, Vietnam, Thailand, Singapore, the US and the Philippines.

In between the eating spree, there were food tours, cooking demos and a food dialogue on street-food culture.

She shot a few episodes in Manila for her new show, “Inspired with Anna Olson,” on Asian Food Channel. Olson  worked with three of the Philippines’ culinary stars—Margarita Fores, Claude Tayag and Rob Pengson.

They shared with Olson a few of their recipes, such as Pengson’s squab inasal and tuna kinilaw, Fores’ short rib adobo with adlai and river prawn sinigang with watermelon, and Tayag’s bulanglang and halo-halo.

For the show, Olson replicated these dishes in her home kitchen and developed new recipes “inspired” by the new cooking skills and ingredients she learned from the Asian chefs.

Culinary goddess Nigella Lawson, who reportedly went gaga over adobo and the local citrus calamansi, visited Manila for the first time  briefly in September for the launch of a product she was endorsing — Contadina, a new Italian-theme line of pasta, olive oil and canned tomatoes by Del Monte.

The attractive and chatty TV personality had been posting on her Instagram various Filipino dishes such as sisig and sinigang and had the chance to drop by the Salcedo weekend market in Makati where she tasted “an awful lot of food,” including chicken inasal. TVJ