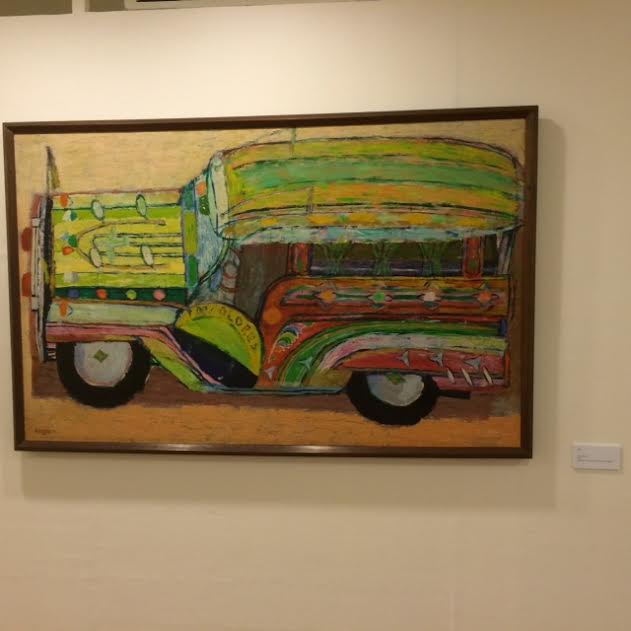 Austria’s favorite image of the jeepney; from the CCP collection

Antonio G. Austria, the pioneering naif folk artist whose often small, deceptively simple canvases depict the jeepney and other popular culture images in bright, winsome colors, was finally given a well-deserved retrospective by the Cultural Center of the Philippines in May to July 2016.

The exhibit “6 Decades of A.G. Austria” united artists, students (Austria was a long-time faculty at his alma mater, University of Santo Tomas), and collectors, who eagerly loaned their works for the show, including Benedicto Cabrera, whose small Austria painting shows him (BenCab) amid his garden greenery, perhaps the “cutest” painting in BenCab’s own museum in Asin outside Baguio City. The work showcases Austria’s highly aesthetic sense of clutter and his deft composition, something also shown in other works where he takes a bird’s eye view of a billiard game table or a table of tambay and heavy guzzlers.

The exhibit shows the deceptive prodigy of Austria, something that had not been lost on pioneering art critics such as Jess Peralta who in the 1960s noted the “child”-like qualities of the paintings, “simple, even naive,” he wrote. But at the back of this, Peralta continued, “is a competent artistry that defines each painterly element in a precise composition that provides tension in equilibrium without emotion.”

Toward the end of the year, CCP opened a retrospective for Danilo Dalena, the expressionist folk artist and a somewhat younger contemporary of Austria. The Dalena show is running till March and ushers in 2017 on an appropriately painterly note.