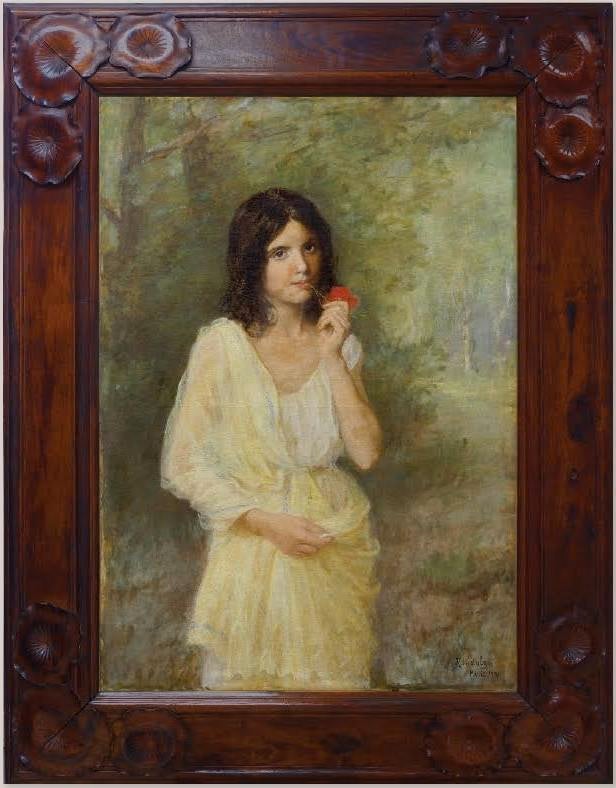 Hailed as one of the great Filipino master painters of the late 19th century, Hidalgo in his painting depicts a guileless young woman in an almost transparent shift.

Art critic and historian Ramon Villegas noted that unlike Hidalgo’s other depictions of women, “La Inocencia” is “ethereal.”

“[La Inocencia] is not quite like his women in moonlight and shadowy forests, but it is almost pre-Raphaelite in its Romanticism,” he said. “[The woman’s] body is mature, but she is unaware of it. However, she is holding a bright red flower, a symbol of desire for worldly knowledge and growing sexuality.

National Artist Ang Kiukok’s 1993 oil-on-canvas “Fishermen” harks back to the artist’s childhood in Davao where fishermen cast their nets in the sea.

Also getting a high bid was National Artist Benedicto “BenCab” Cabrera’s 2003 acrylic on canvas “Tres Marias,” which shows the figures of three women fluidly delineated with a minimal background.

Buen Calubayan’s 2015 oil on canvas “Bundok Banahaw 4” is a view of a mountain that verges into abstraction with the loose and atmospheric painterly strokes.

Another sought-after piece was Elmer Borlongan’s 2009 oil-on-canvas “Mega Touch,” which depicts a blind masseuse pressing the tired arm of a man.

Fernando Zobel’s 1959 oil on canvas “Saeta #248,” part of his Saeta series and reflecting the artist’s shift to absolute nonobjectivism, also got a high bid.

Running true to his style of hyper surrealism, Jose John Santos III’s 2006 oil-on-canvas “The Open Minded” features a man stares at the viewer while juggling.

Galo Ocampo’s 1982 oil-on-canvas “Stations of the Cross Crucifix”—quirkily shaped after the crucifix at the Basilica of Santa Croce in Florence by pre-Renaissance Italian artist Cimabue—fetched a high price.

Part of the auction were the Huanghuali horseshoe back folding chairs and table from the Late Qing Dynasty or earlier (1644-1912). They were constructed from Huanghuali, endemic to China and used for the highest quality of furniture in the Ming and Qing dynasties.

Meanwhile, the 1950s Gabaldon Four-Poster Bed, which belonged to one of the progenitors of the Tinio Family, the richest and most landed family in Nueva Ecija.

Another significant piece fetching a very high bid was the 18th century image of St. Joseph made of ivory and baticuling wood.

“This image of St. Joseph,” said antique expert Martin Tinio, “has ivory face, hands and feet attached to a carved body of baticuling wood (litsea reticulate), a soft wood that became the favorite material for carving wooden statues beginning in the 19th century,” Tinio said. “Prior to that, baticuling was extensively used for the carved and polychromed bodies of small santo with ivory heads and hands, as well as the mannequins that were clothed in gold-embroidered vestments.”