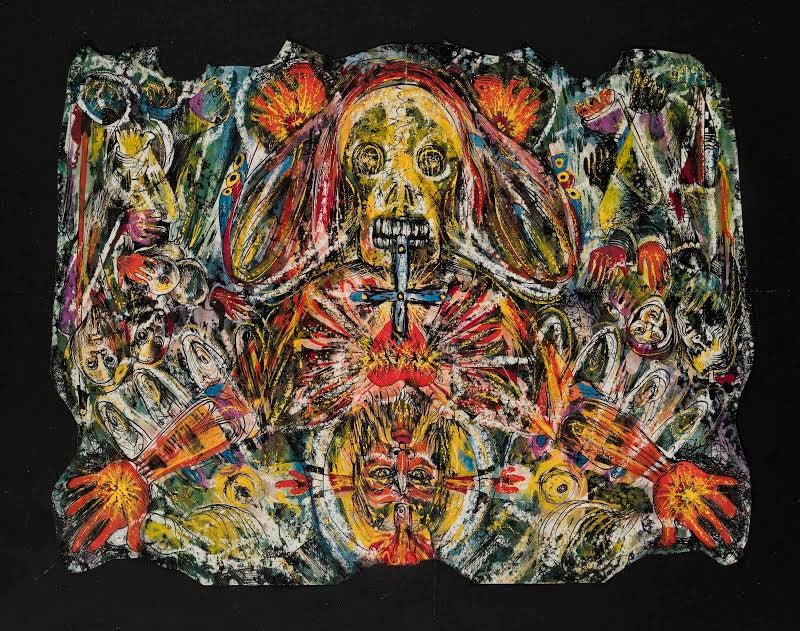 To mark the 100th birth anniversary of artist Alfonso Angel Ossorio, León Gallery mounted the exhibit “Afflictions of Glory: A Representative Selection of His Work,” in February. It was the first ever Philippine exhibit of Ossorio, the Philippines-born dilettante and artist who ruled postwar Hamptons and who was a friend and supporter of Jackson Pollock and an important artist in his own right.

Included in the show was “Study of Sanctuary Mural,” Ossorio’s study for his famous “Angry Christ” mural that dominated the famous modern chapel he designed in his family’s vast sugar estate in Victorias, Negros Occidental.

Sining Kamalig in Cubao mounted in April “Despite My Being…”; it tried to raise awareness on depression and other forms of mental illness suffered by the artists themselves.

Fine arts professor Yasmin Almonte, herself diagnosed with depression, said that the exhibit was her way of baring herself to others, “without shame or guilt, without fear.”

Exhibit showed a balanced, more objective view of the Hispanic, European heritage of the Philippines, and presented the country’s civilizational advancement under Spain before the American invasion.

But the most fascinating item in the exhibit is by an unidentified painter called “Habitantes Indigenos ante de la Reina Regente en la Exposicion General de las Yslas Filipinas de Madrid, 1887.” The painting showed non-Christian indigenous Filipinos being presented to the Queen Regent during the controversial Philippine international expo in Madrid in 1887.

It was named one of the top 30 must-see events and exhibitions of the Biennale by Wallpaper.

As part of its Magnificent September Auction, León Gallery’s held its first-ever curated auction, “Two Navels,” named after the novel, “The Woman with Two Navels” by Nick Joaquin. It was a homage to Joaquin in the run-up to his birth centenary in 2017.

The National Commission for Culture and the Arts Gallery mounted a timely retrospective of the works of the late Angono artist Perdigon Vocalan, whose ecological art was clearly ahead of its time.

Titled “Perdigon Vocalan in Retrospect,” the exhibit explored the life and career of Vocalan, who trained under National Artist for Visual Arts Carlos “Botong” Francsico. Vocalan died in 2001.

NCCA Chair Felipe de Leon Jr. noted that Vocalan was an early advocate of ecological wisdom. He added that his “personification of natural forces and phenomena enables us to identify with and treat them with friendly warmth or fearful distance.”

Monuments builder and modernist sculptor Eduardo Castrillo passed away on May 18 due to cancer. He was just 71.

Known for his massive religious and patriotic monuments as well as his impressive abstracts, Castrillo was the enfant terrible of Philippine sculpture in the 1960s and 1970s whose works now dominate much of Metro Manila and even urban centers in the Visayas and Mindanao.

Norma Crisologo Liongoren, patron of the arts and gallerist, died on Aug. 26 due to complications from stomach cancer. She was 69.