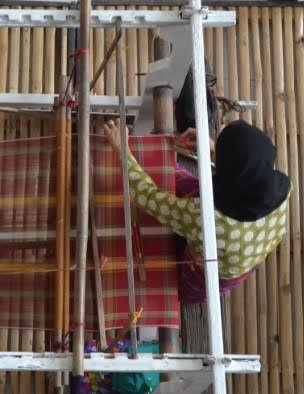 Unlike other traditional weaves from various ethnic groups in the country which now only uses loom products on special occasions, the inaul is still very much an everyday item in Maguindano province.

Inaul (also pronounced inol) is a time-honored weaving tradition of the Maguindanao people usually made into malong or wraparound skirts commonly and regularly used by both sexes.

The Maranaos of Marawi City also has this weaving tradition.

Maguindanao weaver Sittie Dumacil of Cotabato City said inaul has more than 20 designs with riyal the heirloom piece being the rarest since it is no longer being produced and hard to find.

Other notable designs include umpak which is embroidered-laden and hard to do, binaludto or rainbow, panigabi or taro, and the rare tie-dye binaludan called ikat by the T’boli and the people of Cordillera.

The three types of threads being used in weaving are tanor which is cottony, the silky rayon, and katiyado which is the shiny type.

Rayon and tanor can be mixed together to form a malong called “mestiza.”

The colors are also reflective of the Maguindanao culture. Red means bravery, green for peace, black for dignity, white for sadness and green means peace.

Today, inaul is no longer confined to malong and is now being made into modern clothing such as gowns, polo and trousers.

In an interview with Inquirer, Dumacil explained it could take a day and a half to three days before a malong could be finished depending on the level of difficulty of the design.

She said it is easier for them to learn the weaving techniques since it is already innate in them and that they learn it through observations compared to outsiders who can master the trade in three months.

She also said the Maguindanaos also make it a point the tradition lives on by passing it from generation to generation.

It is important that inaul is saved and further advanced since through this tradition, we show that the people of Mindanao are rich in culture, she added.