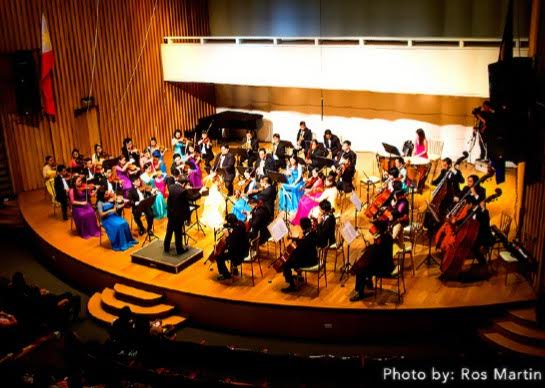 The Manila Symphony Orchestra during a performance

What may well be considered the concert of the year was performed at the Meralco Theater on Dec. 14 by the Manila Symphony Orchestra (MSO) presenting an all Beethoven program. Featured were the monumental Ninth Symphony and the less frequently played Choral Fantasia. The performers included two Japanese male singers and a Japanese lady pianist.

It was not the first time the Beethoven Ninth was being played this year, as two other entities had also done so. What stood out in the MSO program was the pairing of the Ninth with the Choral Fantasia, a much earlier work (1808) but already foreshadowing elements of the later Ninth (1824).

The Choral Fantasia is a remarkable work, weaving what is almost a piano concerto into a symphonic and choral tapestry, in a theme and variations format. The choral passages are not as demanding as those in the later Ninth Symphony. The lengthy of piano part was skillfully rendered by Hiroko Sato, who has concertized in Asia and Europe and is a teacher as well as a performer.

The Ninth Symphony was in its time a pioneering work in introducing a chorus at the end, an example to be followed later by composers like Mahler. The symphony opens with an air of mystery and open harmonic intervals until the full orchestra pronounces the principal theme.

Departing from traditional usage, Beethoven placed the scherzo as the second movement rather than as the traditional third. At the performance the point where soloists and chorus filed back on stage was before the third so the work could go on from the lovely theme and variations Adagio Molto e Cantabile into the explosive opening of the finale.

As an encore the orchestra gave the standing room only audience a Filipino Christmas polka “Ang Pasko ay Sumapit,” a Cebuano melody by Vicente Rubi and Mariano Vesti made into a Christmas song with Tagalog words by National Artist Levi Celerio, sending the people into the chilly holiday night with, warmth in their hearts.