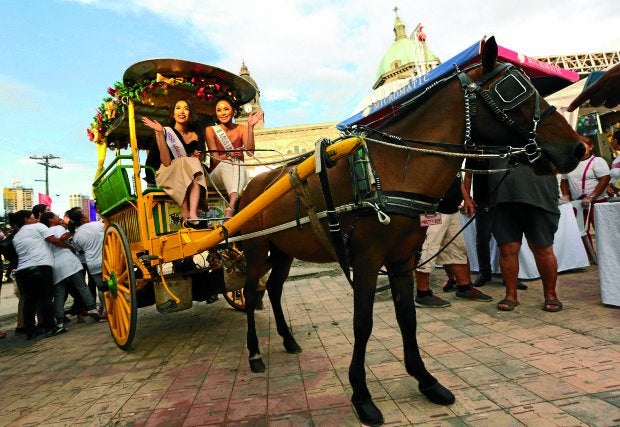 Miss Philippines Maxine Medina and Ms. Vietnam try out the kalesa during a visit at the walled city of Intramuros. GRIG C. MONTEGRANDE/INQUUIRER FILE PHOTO

Gov’t agencies told: No public funds should be spent in Miss Universe hosting

Malacañang has urged government agencies to support the country’s hosting of the 2016 Miss Universe this January but reminded them not to spend public funds for the event unless required.

Executive Secretary Salvador Medialdea signed Memorandum Circular No. 13 on December 28 “enjoining all departments, agencies, bureaus and offices of the government to support the hosting of the 2016 Miss Universe pageant in the Philippines.”

The memorandum has ordered “all heads of departments, bureaus, offices, agencies or instrumentalities of the government, including state-owned or controlled corporations (GOCCs) and state universities and colleges (SUCs)” to extend full support for the hosting of the Miss Universe in coordination with the Department of Tourism (DoT).

Candidates for the pageant are expected to visit the cities of Vigan, Cebu, Baguio and Davao, to showcase the country’s tourist destinations.

READ: 2017 Miss Universe will do wonders for PH tourism

The DoT had earlier said the government won’t spend a single centavo for the hosting of the pageant.