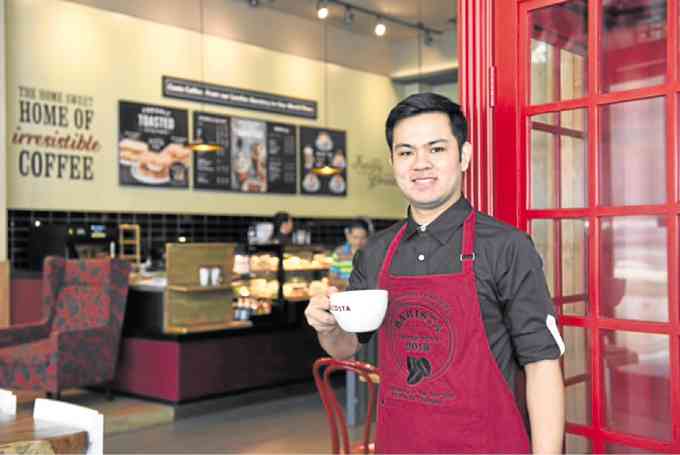 Justin de la Fuentewill represent the Philippines and India in Costa Coffee’s Barista of the Year competition on Jan. 9 in London.

His Sparkling Caffe Mojito is a winner

Every year, Costa Coffee, Europe’s leading coffee shop, holds a competition called Barista of the Year (BOY), which the Philippines has been joining since 2015.

Its main challenge is for each barista to create his own signature drink. In the first stage of competition, the Filipino barista is sent to Singapore to compete with other baristas from Southeast Asia and India.

The winner then goes to represent his country in the London championship.

Costa Coffee’s representative for Southeast Asia and India this year is Justin de la Fuente, a first-time competitor from the Philippines.

“I didn’t actually expect to win during the country finals. The Costa Coffee baristas in the Philippines are all skilled, but I also made sure to prove that I can be one of the best,” says  De la Fuente, a hotel and restaurant management graduate from Centro Escolar University.

He didn’t plan to be a barista. He saw himself working in the kitchen or becoming a PE teacher, as he is inclined to sports.

He was initiated into coffee making when he worked for The Coffee Bean and Tea Leaf. After quitting his job, he now says, the time away from a coffee shop made him miss the job even more—“After those two years, I missed being a barista and that’s why I decided to apply at Costa Coffee.”

His winning drink is a unique concoction he calls the Sparkling Caffe Mojito. It reflects his love of adventure. Its sparkling fruity flavor is refreshing—with a hint of caffeine.

He attributes his success to Costa Coffee: “Costa Coffee has been very supportive in all my decisions. If I have suggestions for the drinks, they accept it. They don’t pressure me into winning; they simply support me to do better. My mentors are very compassionate people.”

Opening in the Philippines only in 2015, Costa Coffee is gaining a clientele for its unique mixture of Arabica and Robusta coffee beans, a blend it calls Mocha Italia.

De la Fuente trained eight hours every day with the help of his mentors. He tries to make his training as light as possible, enjoying it with no pressure. “Where I work, you are not a robot; you can be who you are,” he says.

“My principle is that I want my customers to be happy. That is why whenever I work, I make sure I work with a heart.”

He loves coffee. “I love the smell of coffee. From the time I start my shift, the calmness of its aroma relaxes me on a busy day.”

Justin’s newfound triumph is bringing pride to Filipinos since this is his first time to compete for the country.

He is excited about his UK trip and learning more about British culture. “Most of all, I am looking forward to going to the roastery. Not all baristas are given the opportunity to see the place where Costa Coffee’s Mocha Italia is being roasted.”