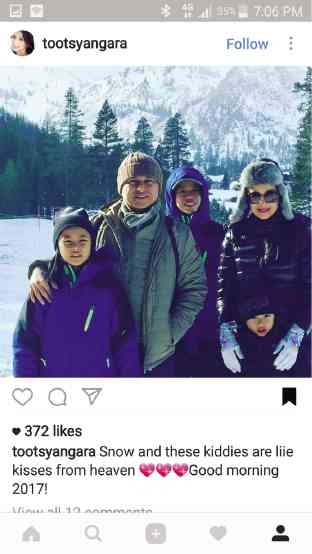 It was winter in social media as many Filipinos chose a white Christmas.

While Boracay with its powder-white sand still holds its allure, for the holidays just past, a number of Filipinos chose to frolic in snow flurries.

If posts in Instagram and Facebook are to be used as indicators, many families saw the snowy winter as their holiday treat in 2016.

Dermatology’s active  couple, Drs. Z and Aivee Teo and their kids chose to ring in the New Year in Japan and so did  actress KC Concepcion and her family.

The Teos spent 10 days at the Niseko ski resort in the northern island of Hokkaido, while KC with beau Aly Borromeo, her mom, megastar Sharon Cuneta, stepfather Francis Pangilian and her siblings enjoyed the sights and flavors of Tokyo and Osaka.

Sen. Sonny Angara, wife Tootsy and their kids hied off to frozen Lake Tahoe where they bundled up for the action.

Lifestyle columnist Ria Prieto and her family also headed to Lake Tahoe where her three sons encountered their first snowfall. The cold didn’t bother them anyway as they were all smiles in the pics Tootsy and Ria uploaded on their Instagram pages.

While many Westerners can only dream of the sun at this time of year, obviously there are Filipinos who prefer the freezing cold.