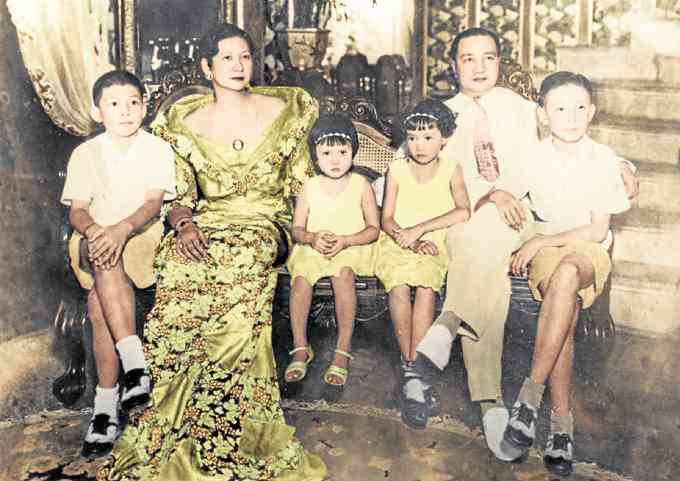 TheQuirino family in an undated photo taken beforeWorld War II: from left, Armando, Alicia, Victoria, Norma, Elpidio and Tomas. Armando, Alicia,Norma and baby Fe (not in photo) all died in the Battle ofManila in February 1945.

Her Majesty Empress Michiko wrote a short but eloquent poem as part of the traditional New Year celebration of the Japanese Imperial Court. She wrote:

“The one who forgave

Along with his name

I etch deeply in my heartThe name Muntinlupa.”

The Imperial Household Agency website made the following explanation for Her Majesty’s poem:

“When Their Majesties the Emperor and the Empress visited the Philippines in January, They met and conveyed Their thanks to the descendants of former President Elpidio Rivera Quirino. Though he lost four members of his own family, his wife and three children, in the war, Mr. Quirino granted a special pardon, after the end of the war, to the more than 100 Japanese war criminals detained at the New Bilibid Prison, the national penitentiary at Muntinlupa, and allowed them to return home to Japan. In this poem, Her Majesty refers to this act of Mr. Quirino.”

This historic act of the Empress is part of what Prof. Satoshi Nakano of Hitotsubashi University calls a “virtuous cycle” of forgiveness and remembrance—where former war enemies express regret for their faults and receive magnanimous forgiveness from their victims.

This theme of remembering and not forgetting was expressed by His Majesty Emperor Akihito during his remarks at the departure honors at Haneda Airport on Jan. 26, 2016:

“During World War II, countless Filipino, American, and Japanese lives were lost in the Philippines. A great many innocent Filipino civilians became casualties of the fierce battles fought in the city of Manila. This history will always be in our hearts as we make this visit to the Philippines.”

And again, during the State dinner on Jan. 27, 2016 in Their Majesties’ honor at Malacañang, he reiterated the same sentiment:

“Last year, Japan marked the 70th anniversary of the end of World War II. During this war, fierce battles between Japan and the United States took place on Philippine soil, resulting in the loss of many Filipino lives and leaving many Filipinos injured. This is something we Japanese must never forget and we intend to keep this engraved in our hearts throughout our visit.”

President Quirino’s act of clemency and forgiveness is the cornerstone of post-war friendship between the Philippines and Japan, a fact that is acknowledged by the citizens and leaders of both countries.

The Philippines and Japan celebrated 60 years of diplomatic relations in 2016, and New Year 2017 is the starting point of a healthier and friendlier exchange between our two countries.

With her New Year poem, the Empress has made sure that the relationship becomes even closer, more vibrant and meaningful. —CONTRIBUTED