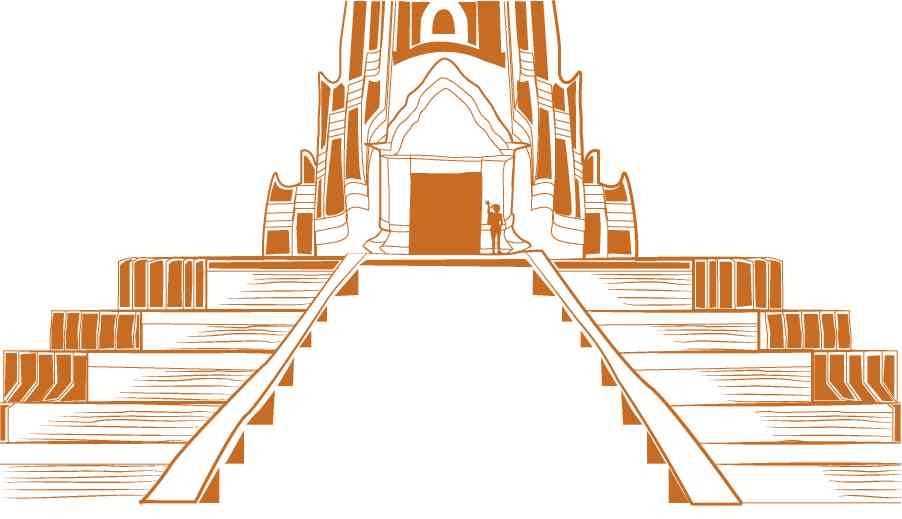 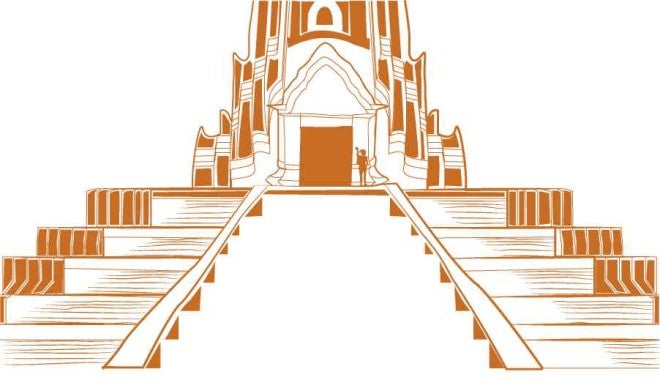 Wat Phu Khao Thong wasn’t like the other temples Manong Tuk-Tuk took her to in Ayyuthaya.

The others were ruins—large, fat, bullet-like stupas of crumbly, red-orange brick; broken Buddhas, sleepy-faced and limbless, headless and serene; uneven pathways and squat platforms prickly with grey-brown grass—alien yet earthy, ghostly in its beauty. But this wat was a gargantuan, completely intact pyramid-like thing, 90 disarming meters high, made of what appeared to be smooth, chalky white stone. The surface seemed to be streaked in parts in black soot, or bore signs of the white paint stripped off here and there from age. It was like a holy site made of cookies n’ cream.

As she and Manong Tuk-Tuk puttered closer towards the wat in their rickety rickshaw, she realized that the ridges against the wat’s steep sides were actually flights of stairs. They were more or less a hundred steps on each side, and led about three-fourths of the way up to the base of the spire. At the top, there appeared to be some sort of deck where you could walk around and look out to the vast expanse of Ayyuthaya like an aspiring mountaineer.

She hated stairs. But what else was she going to do? She had already spent half her 13th month pay on the promo fare from MNL to BKK, as well as a 3D/2N Agoda.com hostel stay, no breakfast included. She had never been out of the Philippines before then, and figured she might as well go.

It had been three months since she had been discharged from Makati Med for her nervous breakdown. Technically, Dr. Lantano would have passive-aggressively tut-tutted upon traveling abroad so soon after, but he didn’t own her life. She needed this jolt. She needed to be somewhere she had never been to see why there was nothing wrong with being alive.

She climbed the stairs in one go, refusing to rest. Once she reached the top, her heart was slamming itself against her chest like a fireman at a stubborn door. She took a swig from her water bottle and started walking around the deck.

She turned the corner and found that she wasn’t alone. It was a backpacker couple-pale, Nordic blonde hair in bandannas; freckly skin beet-red from the sun; enormous North Face gear festooned with buckles and pockets; drop-crotch drawstring elephant-print pants fresh off the racks at Khao San Road. They were holding hands and taking in the view from their giant, ancient balcony, their faces brimming over with worship and wonder. Clearly, they would remember what they were seeing for the rest of their lives.

She glanced out into the vast expanse for herself. What she felt was worse than nothing. Stretched out before her were fields upon fields of rice paddies, dotted sparsely with coconut trees and some farm equipment. Farther on were ordinary roads lined with wooden roadside stalls. A gas station logo hovered vaguely on the horizon. Small, unremarkable brown birds flit through the sky.

It looked like Laguna. Or Batangas. Or Bulacan. Like she had hopped onto the next provincial bus in Cubao and stayed at the penthouse of a mid-range hotel. She felt the world quickly grow a touch smaller and tighter, as if sucked for a split-second by a vacuum hose.

She glanced down near the base of the wat, where Manong and his tuk-tuk waited calmly for her. Manong saw her looking, waved, and gave her a thumbs up. Good job, said his thumb, for making this difference in your life! I am so proud of you! Travel is good for the soul! It was a gesture he had given a thousand times.

She waved to him slowly, as if to say goodbye, as if the wat were to suddenly drag itself smoothly away on the dry ground and take her to where she should be next.