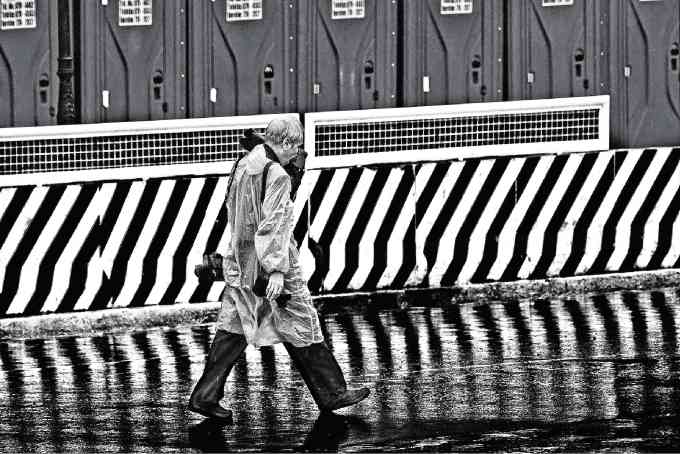 Noli covering the 2015 visit of Pope Francis, as photographed by his friend George Cabig

At last month’s wake for ace photographer Manuel “Noli” I. Yamsuan Jr., with the number of priests present calling him “Tito” or “Kuya,” there was absolutely no doubting the fact that this man was a friend of the Church.

Fr. Jonathan Mojica, the priest who gave the homily at the Mass on the evening of Dec. 12, was a longtime sacristan at the Edsa Shrine who fondly remembered hearing “Tito Noli” making a clicking sound. “That was his way of telling you to get out of the way,” Father Mojica said, “and if you didn’t move, it would get faster—‘Tsk-tsk-tsk-tsk.’”

Noli had told Father Mojica that he would photograph his ordination, but the young priest, now assigned to Sto. Niño de Tondo, was ordained the very day Noli died, Dec. 10, 2016, Saturday.

As Noli took his last breath at 3:45 p.m., at the age of 71, at the Cardinal Santos Medical Center, Father Mojica was about to begin his first Mass at 4 p.m.

“I dedicated my Mass to Tito Noli—and remembered how he was always reminding us to get out of the way, because there is someone more important than us. God should be the center of everything.”

I first met Noli Yamsuan as a young writer working for Lifestyle Asia Magazine, from 1987 to 1991. Noli already had quite the fearsome reputation then, as a veteran photographer for Daily Express (in the martial law years) and later, as photo editor of the famed anti-Marcos magazine Veritas, and as a contributor to many other local and international publications. His fantastic photographs of Edsa, Cory Aquino, Jaime Cardinal Sin and other historic figures had also been featured in print media and in books about the People Power Revolution.

Noli was (and remained, to his death) an outspoken perfectionist; slow writers or account executives trying to get him to photograph something would hear it from him if the shoot was haphazardly prepared. Yes, we heard that tsk-tsk-ing a lot; that, or a loud “Hoy!” if you didn’t pay attention, as he glared at you above the grandfather spectacles resting on his nose, his face turning red with exasperation.

I found much satisfaction in the rumor that if Noli didn’t like you, you’d know it, but if he did, he was absolutely wonderful. And we got along so well I could hitch an occasional ride home, as my house wasn’t far from his townhouse on Katipunan Avenue, near St. Ignatius Village.

On the drive, Noli would regale me with stories of characters he had photographed, crack jokes and spew out puns (accompanied by his infectious, high-pitched laughter). Although he could easily articulate what he wanted to any subject, unbelievably, we would also sometimes conduct entire shoots and conversations with Noli in character as Mr. Shoo-Li, the character from the TV show “Mongolian Barbecue” popularized by comedian and director Jun Urbano. “Oooh, so you wanna me tek dis pichoor lak dis?”

People who weren’t used to it would wonder how we understood each other. “That was one of the things I loved most about him,” says his wife of almost 40 years, Peachy Evangelista Yamsuan, with a wistful sigh. “His sense of humor.”

He was a hands-on dad to his three children, Jimbo, Erwin and Paola.

“Actually, he would be the one to attend school conferences, because he had a flexible schedule, and my mom would be working,” says Erwin. (Peachy was the longtime head of the Archdiocese of Manila’s communications office, until she retired recently.)

“The other parents there would be moms. Even with our friends and cousins, he was the fun uncle who knew the latest toys, who would be the one assigned to bring the cousins to watch the latest movie.”

Noli was also a doting grandfather to four granddaughters, ages 3 to 6, as his sons would often leave the girls with their grandparents. When Jimbo’s wife Jinky started a baking business, he promoted her stuff tirelessly on Facebook.

He made quite the mark as the close-in photographer of Jaime Cardinal Sin. It was the ultimate “assignment,” which created for Noli a whole new “niche” that only he occupied, that of a master liturgical photographer.

“He told me he wanted to give liturgical photography seminars in the archdiocese, because it’s important,” Peachy says. “He wanted to teach the basics, how to do church photography, stuff he learned on the job. He was very much a stickler for proper liturgy; he would whisper to me, ‘Tingnan mo yung pari, hindi lumuluhod.’ He wanted the liturgy to be good because it’s a form of worship that you do for your faith, so you should do it well. You have to live it.”

Noli took delight in telling people that he shot bishops, priests and cardinals; at the wake, a group of young people, obviously his students, showed up in T-shirts that read, “I shoot priests”—probably a uniform Noli insisted on.

The years spent covering Cardinal Sin—until the latter’s death in 2005, after which Noli was “inherited” by Cardinals Gaudencio Rosales and Luis Antonio Tagle—did transform him in deeper ways.

“He was not religious before,” Peachy reveals. “I didn’t have anything to do with it as a direct intervention, and he didn’t like talking things out. He came to it on his own. In a way, how can you be covering the Church, priests and cardinals and not make the faith part of your life?”

Some of the most memorable photographs of Noli were taken during such coverages by his very own students, Peachy reveals.

The photograph on his coffin, his Facebook profile pic, showed Noli in a suit at the Vatican, during the consistory of Cardinal Tagle.

In a 2014 interview with his niece Cathy Yamsuan for Inquirer Lifestyle, commemorating the launch of his acclaimed book “Scenes of Sin,” Noli recounted how “I could smell the aftershave lotion of the Pope” during John Paul II’s visit, and how another saint, then Mother Teresa of Calcutta, arrived at the airport holding only a small tampipi. It was a record of highlights from a career spanning some 40 years.

Thanks to Facebook, indeed, we managed to keep in touch through the years. Noli was a constant source of prayers and cheerful words during my bout with breast cancer.

In response to my 2013 post about the challenge of chemotherapy, Noli retorted, with characteristic humor, “Chemong-ina yan!”

I saw him last at the 40th day Mass after the death of our Inquirer editor in chief Letty Jimenez-Magsanoc, in January last year, at the Archbishop’s Palace. He looked thinner and older, but still joked around with gusto.

Two months ago, he posted a disturbing request for prayers, because “I am not well.” Noli had had diabetes for a while, but had been diagnosed with tuberculosis, recounts Erwin, and the medicines made him so weak and queasy, he had to be hospitalized in early October. He had been in and out of the hospital since then, due to other complications that left him complaining from the pain.

“I think he and we were all surprised at how fast the progression of the illness was,” notes Erwin. Still, Peachy managed to joke, “The death certificate listed several probable causes; the doctors covered everything!”

There’s a lovely black-and-white photograph of Noli taken by his friend, photographer George Cabig, which shows him walking in the rain between barricades during the visit of Pope Francis. His back is turned and he’s in a raincoat, head bowed, but gait certain.

It’s a wonderful image of this shooter of priests and chronicler of the faith—a tough, grizzled news photographer who, in finding his true “beat,” also found his genuine self, without losing an ounce of his humanity.