What happened to Gloria Diaz and Margie Moran after their Miss U reigns | Lifestyle.INQ ❮ ❯ 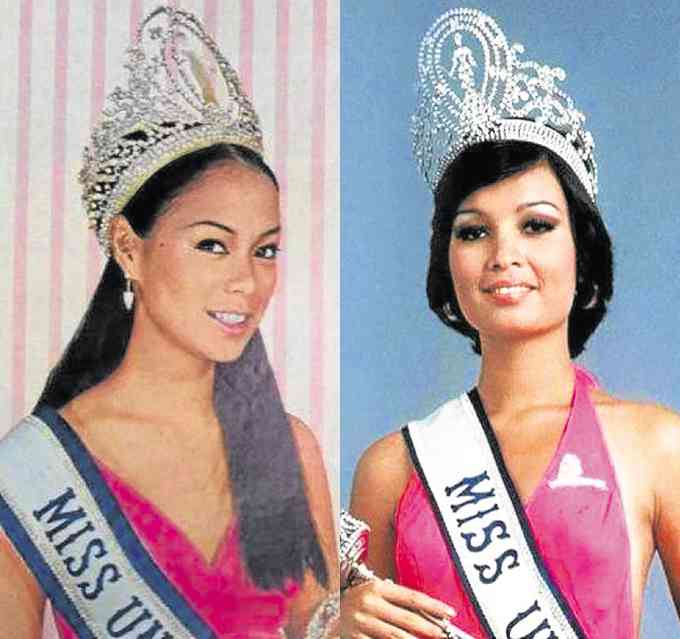 Your mantra for the week: Beauty is a state of mind, and I am expressing it now.

Eckhart Tolle claims we were all born with a pain body, the accumulation of all painful experiences from the time of our conception. This pain body remains dormant and goes to sleep, so to speak, until the next pain experience, which can be triggered by negative dispositions.

I have prepared a delightful menu for the pain body in case you decide to be masochistic and partake of its different courses:

For appetizers: spicy gossip, a platter of judging and condemning, blaming with lemon squeeze.

For the main course: chili anger, pan-fried feeling sorry for oneself, sizzling unforgiveness with hatred sauce or roasted resentment marinara.

Kudos to the MVP Group of companies, which includes Philex Mining Corp., PLDT and Meralco, for winning the very first Institutional Investors Governance Awards. This award is bestowed upon publicly-listed companies with excellent corporate governance.

The anniversary celebration was highlighted with a tree-planting at the Padcal mine camp.

Chair Manny Pangilinan can now appropriately spell his name as Money V. Pangilinan, especially in 2017, the year of abundance.

At the end of the month, a Miss will be crowned the most beautiful girl in the universe.

I remember Armi not only as very beautiful, but also extremely intelligent and lady-like. In 2012, she was awarded the Order of the White Rose of Finland, underscoring the fact that she had brought  honor to her country.

Virgilio Hilario named their building in Ayala Avenue the Gilarmi Apartments, where now stands Discovery Primea, whose lounge is named Gilarmi. They had five children.

Arne married a Chilean and is involved in the car industry. Anna-Lisa, like her mother, was a beauty queen—1974 Queen of the Pacific, a title held in 1971 by activist beauty queen Nelia Sancho. She is now busy restoring antiques in Barcelona. She has a daughter, Katarina Grey, a fashion designer and with a label under her name. Her brother, Alex, owns a resort in Siargao.

Eva is married and lives in California, while Jussi lives in Canada; her youngest son Mikko is an underwater photographer who lives in the Philippines.

In 1977, I was finally allowed to appear on TV again after being a former detainee. I cohosted a show with Gloria Diaz called “Manila After Dark.” For its opening episode, Gloria wore a chiffon dress even if it was well-known that she never wore any underwear. This was not obvious on the TV screen until the end of the show, when the lights went on.

Gloria also speaks her mind, like the time she was rehearsing for a fashion show, got tired and rested without telling the director Leila Benitez, who was then the undisputed taray queen of emcees.

Leila immediately called her attention and said, “Ms. Diaz, please come back on stage, who do you think you are?”

In 1973, Margie Moran—a cousin through my father Carlos Moran Sison—was proclaimed Miss Universe, to the delight of the whole country. Her roommate Miss Mexico said in an interview, “That Miss Moran really deserves the crown. She is the neatest and sweetest-smelling candidate of all.”

After four decades, the crown belongs again to another Filipino—Pia Wurtzbach, who is scheduled to be back in the country in a day or two. Pia has brought back the focus of the world on the beauty of Filipino women and the many wonders that can be found in our country of 7,641 islands.

At the press con, Gloria and Margie recalled how they felt on the last day of their reign.

After she crowned the new Miss Universe, “The crowd literally almost shoved me off the stage,” said Gloria.

Both of them experienced something like a nudge—a reality call reminding them they were once more ordinary citizens of the universe.

But, “Thank God for our families. Our flight back to planet Earth was made more gentle by their being there,” said Margie.

However, they both agreed that “as Miss Universe, we still had many perks awaiting us when we got home. At the very least, we never get accosted by the police when we made a wrong turn. They just asked for an autograph, and in today’s world, a selfie.”

Both recalled, “During our time, physical enhancement was unheard of. We were just the way we were and we were never trained for the Q&A portion.”

For his part, Manong Chavit said, “I have financed this project not to make money but to help promote the country’s image so that we may become a favorite tourist destination, thus contributing to the economy  and the appreciation of our country and our people. I wish every Filipino could experience the coronation night live. It is a once-in-a-lifetime experience, and tickets are easily available in all SM outlets.”

In the meantime, Secretary Teo said, “We, in the Tourism department are so grateful to Gov. Chavit Singson for taking over the financing of this project, because this department has no budget for such a large undertaking.”