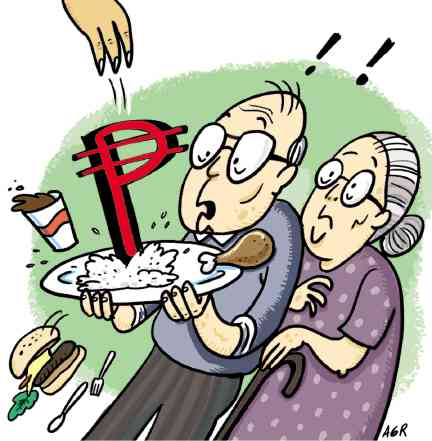 Dying is no big deal. The least of us will manage it. Living is the trick.” That’s a eulogistic remark I love not just for its felicity, but for its infinite range of applicability. It’s by Red Smith, an absolute favorite of mine, too, and I cite it here for my own case.

After a decade of rightly deserved due, I find myself at risk of losing some of my senior-citizen privilege. As it is, only certain purchases, mainly prescribed medicines and food eaten out, are covered by a 20-percent discount. On the food, the 12-percent value-added tax is also waived, bringing the total discount to 32 percent. But the 12 percent VAT exemption would go if the finance secretary had his way.

Medicines are easy to connect to seniorhood, being in themselves a veritable lifeline in many a senior case. But eating out? Well, let me tell you: If my wife and I didn’t eat out enough, we’d be the poorer and unhealthier for it; we’d be courting dangers to the preservation—for richer, for poorer, in sickness and in health—of our cherished union.

Left on our own in our septuagenarian years, if we didn’t eat out enough, we’d be depriving ourselves of just about the only socially pleasurable routine that allows our old, vulnerable bodies to stay lubricated and movable; we have a nice neighborhood walk from home to dinner, around and back. Home being naturally conducive to horizontal or sedentary living, overstaying-in could be a sure way to terminal inertia. And, if we fought the temptation and took up the labor of cooking and housekeeping ourselves, we’d be taking the opposite, yet still no healthier, direction—toward terminal overexertion.

The economics is no small concern, either; marketing and cooking for two, whether you do them yourselves or not, don’t make for a sensible enterprise. And a life sustained by leftovers is simply too miserable for any senior.

The question, though, is not what favors we seniors deserve, but what obligations we are owed. Which brings us back to Red Smith’s philosophy: “Living is the trick.”

A universal benchmark has been set: age 60. Beyond that, living should be rewarded as a feat. And more so in our case, where the trick, difficult enough to sustain as it is due to the progressive decline of capabilities that comes with aging, is made an even greater challenge by the operation of a mix of factors that may be put down to want: the Filipino life expectancy is under 70.

That makes the plot to shortchange seniors even more rotten. That it’s lost on a national leadership that itself comprises seniors smacks of a betrayal—although power and its perquisites do have a way of making one blind to life’s most fundamental principles.

And adding insult yet to betrayal is the presumption that the better situated among the seniors are so bereft of any sense of altruism it is not beyond them to covet the most paltry privilege to the disadvantage of their less fortunate fellows.

Anyway, me, I insist on collecting my perfect due and on choosing the beneficiaries of my own altruism. I’ll be damned to cede the choice to, of all surrogates, a regime whose strategy for economic equality is merely to transfer weights in order to lift the depressed, as on a seesaw, instead of producing new gains for redistribution. But I will feel worse, indeed I will feel criminally complicit, knowing how twisted the regime’s sense of social justice is, a pathology well revealed in its war on drugs.

It’s a war prosecuted on the president’s pronouncement that drug addicts are useless if not dangerous to society, therefore deserving to be exterminated. In the government’s vulgar economics, rehabilitation, if ever an option at all, is simply unaffordable.

Sure enough, in six months, around 6,000 drug dealers and addicts, mostly from the poor communities, are dead, and the killing has only just begun. The specter numbs the mind given the president’s own count of Philippine addicts—four million.

I don’t know that there are seniors among the initial dead; if there are any, they will go into the ledgers as numbers representing senior-expense savings.