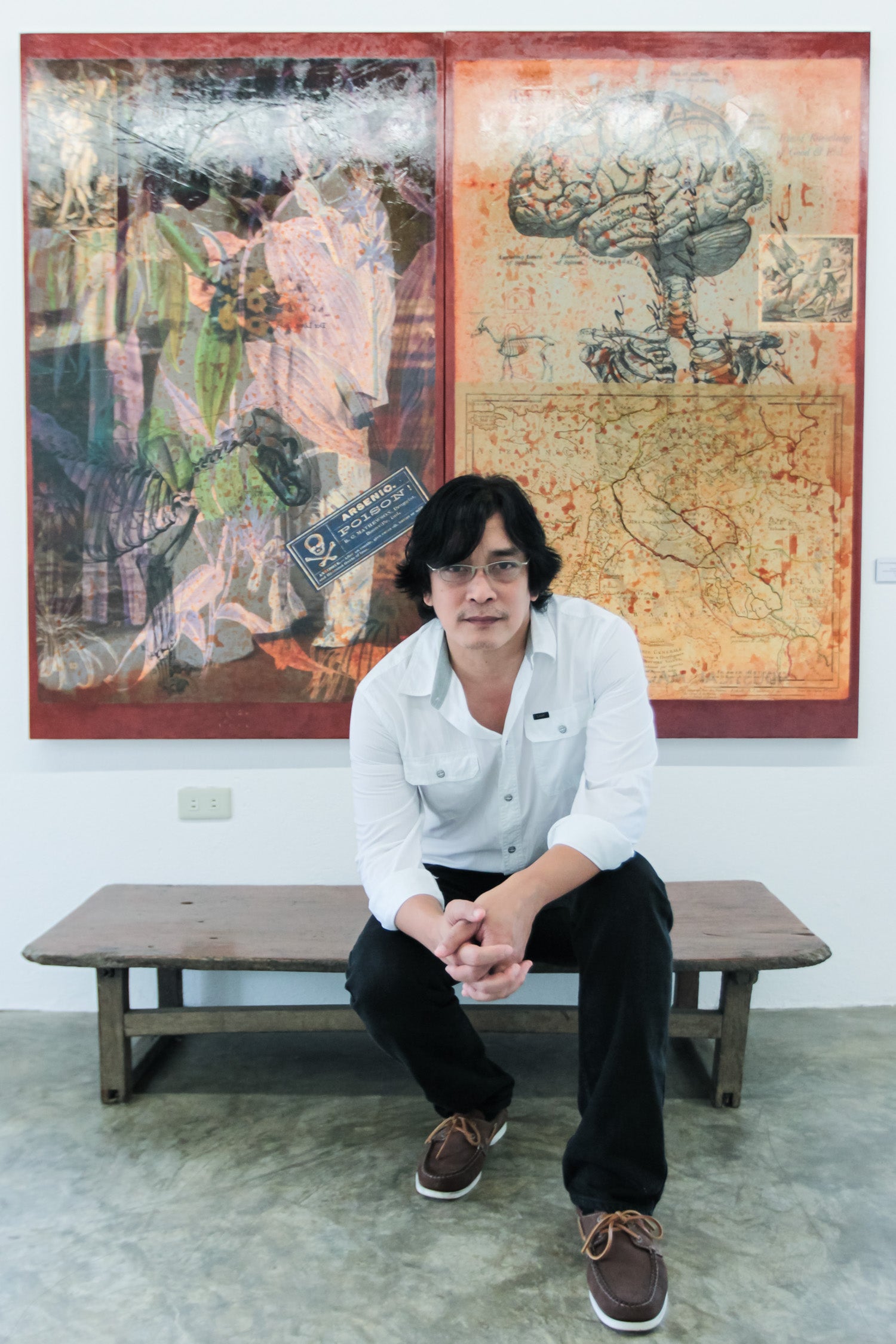 Legends of the fall: Antonio Leaño’s ‘East of Eden’

The convergence of science and myth is the springboard from which the Antipolo-based artist Antonio Leaño created the multimedia works in “East of Eden,” his last exhibit at Pinto Art Museum.

Consisting of 17 large works making use of digital collage techniques and other media, the sold-out show combines images of early 20th-century Filipinos with old maps, engravings, symbols and diagrams that make explicit our hidden links with the ancient past, extending all the way to our primal ancestors—

the first man and woman.

“It’s a re-exploration of our beginnings,” says the 53-year-old artist. “What was our original state, where in the world was the garden of Eden really located?”

Once described by his friend and patron, Dr. Joven Cuanang, as a “polymath”—someone learned in a lot of fields— Leaño can quote scripture, the ancient “Epic of Gilgamesh,” the “Pseudoepigrapha” and other apocryphal and esoteric works, as well as the latest discoveries in human genetics.

He can argue convincingly that the “Tree of the Knowledge of Good and Evil” and the poisoned fruit were not real plants, but a symbolic way of describing human evolution.

“For me it’s not a physical tree but something else,” he says. “For me the tree is symbolic of the human brain.”

Bearing titles such as “Descendants of Eve,” “Descendants of Mitochondria,” and “Am I My Brother’s Keeper?” the works function in a way like religious icons or mandalas—as springboards for meditation and reflection—at least for those so inclined.

Leaño is a product of the studio arts program of the University of the Philippines College of Fine Arts. Having lived and worked most of his life in Antipolo, he is most associated with the Saling Pusa art collective, a loose band of artists that included, at one time or another, Elmer Borlongan, Cris Villanueva Jr., Rolly Acuna, Andy Orencio and Ferdie Montemayor.

Although it was never really a school of painting per se, the Saling Pusa group was eventually associated, through no fault of its own, with a particular type of figurative painting with a certain amount of sociopolitical content—a kind of stereotyping that Leaño chafes at.

“We each had our own directions, even within the group,” he says. “It was more of a community, a group of friends from different artistic disciplines. We had writers and photographers in the group. It just so happened that we had several visual artists with similar styles, which is why we were perceived as a ‘school.’”

“East of Eden” was hailed as a return to pure visual art for Leaño, although in truth, he never really left. It’s just that in the last few years, most of his energy has gone into designing the grounds and buildings of the Pinto Art Museum and the adjoining Pinto Academy, now a favorite daytrip for harassed Metro Manilans looking for a quick getaway from the city.

“Early in the 1990s, I became the artist-in-residence at Pinto, when it was still unformed,” he recalls. He just needed a place to work, but he started tinkering with the garden.

“I approached it from a visual artist’s point of view, making a composition using the lines of the plants and their colors, to create the garden,” he says.

Dr. Cuanang, for whom Pinto started as a weekend getaway from his busy medical practice, liked the result, and encouraged him to continue. It became an ongoing, organically growing project.

“It had all the elements: earth, air, water, sunlight, and what I was doing became my artwork,” says Leano. “I like the human element, the interaction of people with the living space. A garden should have an effect on people, if not healing then at least introspection or meditation.”

The project escalated when Dr. Cuanang decided to open Pinto to the public as an art exhibition space, and as a haven for artists working in and around Antipolo. Pretty soon it was taking up most of Leaño’s time.

“That might have led to the perception that I had stopped painting,” he says.   He would tell people that he was still working, only it was on very large installations, and there were no exhibit openings or ribbon-cuttings.

Last year, Dr. Cuanang opened the Pinto Academy, consisting of a separate building, an amphitheater, and other public spaces. It serves as a venue for workshops, lectures and performances. Currently, Leaño is working on a new café for museum-goers.

The artist’s striking design for the Pinto compound has not been lost on visitors. A number of them have hired him to design their own homes, and demand continues to grow.

“This is my world,” says Leaño, who still lives in Antipolo with his wife and daughter.

It is pretty much an ideal situation, allowing him a certain distance away from the frenetic gallery scene in Metro Manila, and allowing him to create his works at a more deliberate pace, without being unduly influenced by what’s currently trending in the overheated art market. It also gives him the luxury of being able to pick and choose where and when to exhibit, outside of Pinto.

“You can’t really turn off creativity, you can’t turn off being an artist,” he says.