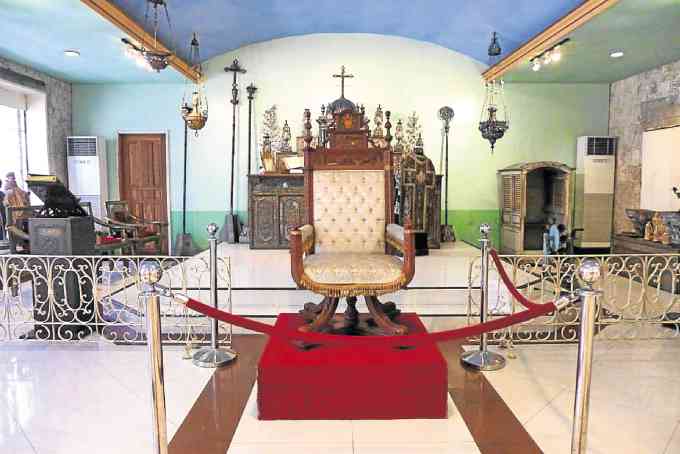 The Papal Chair for Pope Paul VI in Cebu

Tony Adriano: Designer of the divine

Tony Adriano comes from a family of pioneers in Philippine furniture, a venture started by his grandfather, Simplicio Adriano. The venture was passed on to his son Avelino Adriano, Tony’s father and mentor.

The family started a small shop on Isaac Peral, now UN Avenue, where prominent families and institutions were the first clients.

At the outbreak of World War II, the family transferred their shop to the compound of Ermita Church, facing A. Mabini Street. This is where Tony started to help his father.

He studied Fine Arts at the University of Santo Tomas, but his closeness to the Nuestra Señora de Guia, enthroned at Ermita Church, prepared him for his future work. He started as sacristan and later became the recamarero or caretaker of the Virgin.

When his father passed away, Tony expanded the business. With his friend and partner, Noli Veridico, the workshop was enriched, making furniture, doing interior design and decoration for clients.

Tony then went full blast into design and fabrication of church interiors, and the design of liturgical vestments. He was the first and foremost liturgical designer in the Archdiocese of Manila. Tony made two chairs for Pope Paul VI and the late Pope St. John Paul II.

He was awarded Pro Ecclesia et Pontifice, the highest award given to a lay person in recognizing his love and service to the Catholic Church.

The Professional Regulation Commission conferred on him the Most Outstanding Professional of the Year Award as interior designer.

Former President Gloria Macapagal Arroyo commissioned Tony to be the sole designer and furniture manufacturer for the interiors of the Presidential Study and Chapel at Malacañang Palace in 2007. He was also commissioned by the late Cardinal Sin for his office at Villa San Miguel, and for the Ceremonial Chair of His Eminence Gaudencio Cardinal Rosales.

In November 2016, the Royal and Pontifical University of Santo Tomas gave him the TOTAL award as Most Outstanding Alumni in the field of Interior Design.

“Fashion and trends are very transient,” says Tony. “Here is where the individual designer’s creativity comes in. Designers must design for change, and induce manufacturers to introduce new materials to increase the trade and improve craft and talent. There is fashion in art, but art must be treated as universal and eternal. It is the duty and responsibility of the artist to distinguish the permanent from the transient, and the good from the bad.”