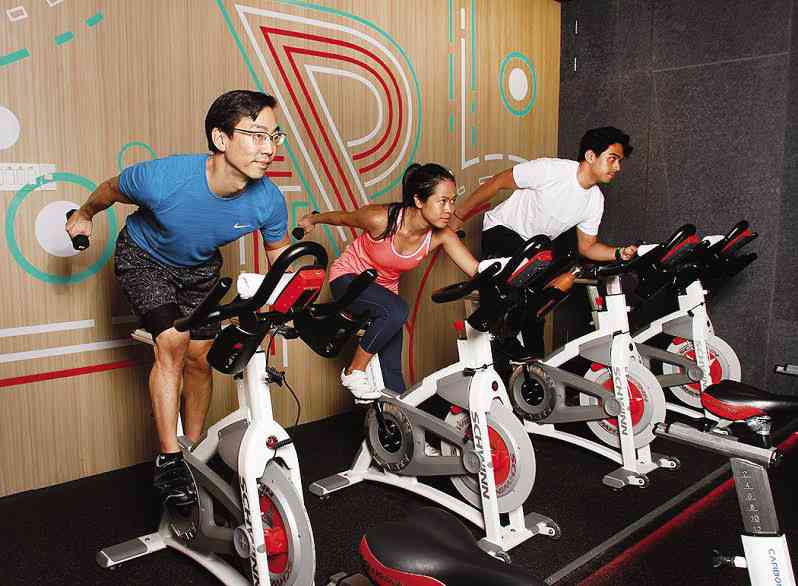 The total body workout combines pedaling the legs while pumping light weights to activate the smaller muscles on the arms and shoulders. NELSON MATAWARAN

Why Pen’s Mark Choon loves, not just cycling, but spinning

Dapper in a dark, pinstriped suit, Peninsula Manila’s general manager Mark Choon arrives in the spinning studio, a large sports bag slung on his shoulder. The instructors and the staff, used to seeing him in cycling shorts, are pleasantly surprised.

Between a meeting, family duties and a hotel department party, he has managed to make time for an interview on how he keeps fit.

One of his activities is spinning or indoor cycling, the clammy, heart-pounding, mood-lit fitness passion du jour, helps him cope with pressures.

The ABK (American-born Korean) hotelier says, to relieve stress, he works out. “It’s a great release and it helps you see things from a different perspective,” he says.

“I get more stress if I don’t have a chance to exercise. It’s an important part of my life.”

Choon was a real estate broker before he joined The Peninsula Hotels. He began his hotel career in 2001 as part of the pre-opening team of Peninsula Chicago.

In nine years in Chicago, he worked his way up from overnight manager to resident manager.

While working at the front office, he met his future wife, Jennifer Evangelista, a Filipino woman training in the reservations office. The office romance developed.

Choon was then assigned to Peninsula Bangkok and Peninsula Tokyo, as hotel manager in both.

He took up spinning in Tokyo, which has a strong spinning culture.

“I’ve always enjoyed cycling, but to do it in a room on a stationary bike, in my opinion, is not exciting,” he says.

“I like the concept of spinning as a group activity with dynamic, high-energy instructors. It’s 50 minutes of high-intensity peaks and valleys of cardio with music in a nightclub-like atmosphere.”

Last February, he moved to the Philippines as general manager of Peninsula Manila in time for the 40th anniversary celebration.

Even given the hotel’s constant success, Choon aims to raise the bar and reach out to a younger clientele.

“There are perceptions that the Peninsula is my father’s hotel. We have to be more innovative. Our team consists of seniors, who are icons in the industry, and we have hirees in their 20s with a different outlook. We can draw from both. Nobody has a monopoly of great ideas. Manila has a winning combination for work—people are outgoing, friendly, engaged and warm. Food and going out with friends are a major part of life,” he says.

Choon starts his day with weight resistance training in the hotel fitness center.

After work, he bonds with son Francisco, 5, eats a light dinner, feeds the dog and hies off to the 9:15 p.m. spinning class. Ride Revolution is packed at that time as young professionals catch up with their routine after a busy day or wait for the rush-hour traffic to ease up.

A session consists of intense cycling which mimics uphill climbs, sprints and jumps on a circuit combined with brief recovery time and slower pedaling.

It combines core-strengthening movements such as tapping the body parts. The pedaling that builds up the butt and thighs is balanced by light dumbbells for the arms.

Participants sometimes get off the bike to exercise—for variety.

The attraction is the pulsating rhythms of popular music combined with calming sounds. The class becomes more enjoyable with an instructor who barks the instructions or motivates the class.

Aside from moving to the music and being inspired by the instructors, Choon enjoys the community feeling in the spinning class.

“You feel the exhilaration and the pain together. At end of the day—just when you think that it can’t get any more difficult, the instructors will push you. ‘You can do it!’ There are sounds of exhaustion from everybody,” says Choon.

On the benefits of spinning, Choon says he has more energy and got trimmer. “I have fewer tires around my waist. I’ve had to tailor my suits.”

This is despite the fact that he enjoys Filipino food such as pork and is searching for the best crispy pata.

“My wife says I eat more Filipino food than she does. I’d pop into restaurants and have lechon or inihaw na baboy,” he says.

Still, he believes in moderation. When he indulges in pork dishes for lunch, Choon eats a healthy and light dinner.

“I’ve made the conscious effort to make better choices about my lifestyle, from eating to exercise.”

About his age, Choon loves to say that he graduated from high school when “Top Gun,” the military action drama, was big hit in 1986.

“I knew I was old when a woman asked, ‘What’s ‘Top Gun?’” says Choon, who is still boyish-looking at 46.—CONTRIBUTED