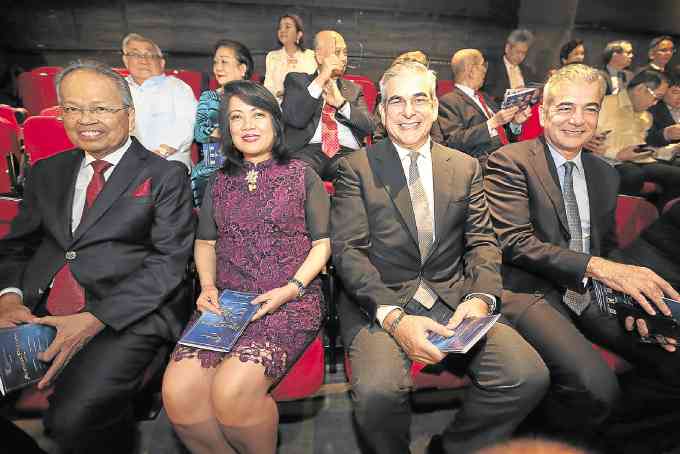 A life in law, set to Cayabyab’s music

While it takes more than an 18-song libretto to sum up former Chief Justice Artemio Panganiban’s first 80 years, the musical tribute “Ageless Passion” offered a colorful glimpse into his journey as a humble newsboy whose intelligence and perseverance led him to become one of the country’s most revered legal minds and charismatic thinkers.

Panganiban celebrated his 80th birthday in early December with a well-attended staging of the musical at the BGC Arts Center in Taguig City.

In her welcome remarks, the former Chief Justice’s daughter Maria Jocelyn Panganiban-Hannett told guests of her father’s passion for travel and family, and of his sacrifices to send his children to the best post-graduate schools in the United States.

Evelyn Toledo-Dumdum of the Foundation for Liberty and Prosperity talked of Panganiban’s advocacy of “justice and jobs, freedom and food, ethics and economics and democracy and development” as founder and chair of the foundation.

Agustin, Panganiban’s erstwhile executive assistant (EA) in the Supreme Court, talked of his “luck” when entrusted with the task of telling his boss’ story through lyrics.

He said the process of song-writing “involved a lot of listening to [Panganiban], looking through his books and works… I was lucky enough to be his EA in 2006.”

Agustin added that the challenge was to put into verse parts of Panganiban’s story without sounding “too legalistic, too awkward, especially the lawyerly stuff. I had to be more poetic about these things so they can be put into song.”

Composer Cayabyab has nothing but praise for the lyricist, saying “once there was a libretto, it was very easy to follow. The music came very easily because the words actually contain the feelings and the natural inflection, so the melody naturally follows the contour.”

The musical tribute’s underlying message is that jurists and lawyers must safeguard the liberty of people and nurture their prosperity under the rule of law. Hence, the foundation has pledged to support projects that promote, develop, assist and protect these ideals.