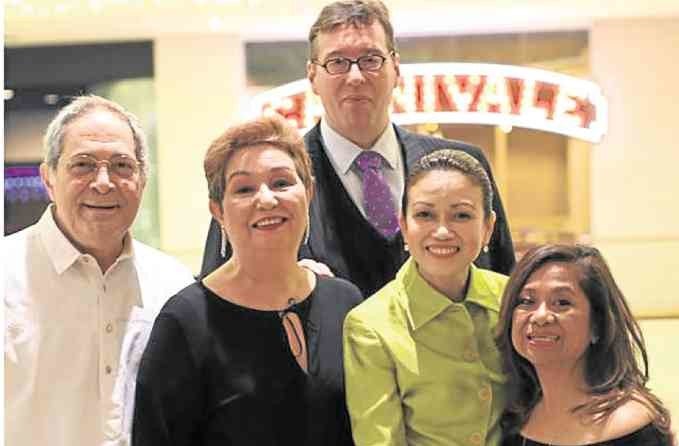 Celine came with hubby Noel Bautista, and their children Con-Con and Sheba, Jay-Jay and Apple, and Chin-Chin and Sultan Joson.

Dinner started with thanksgiving prayer led by her granddaughters, Sam and Andrea Joson, followed by the blowing of the birthday cake led by 12-year-old granddaughter, Marga Bautista.

During dessert, a program started; it was emceed by her sister, Nona Ricafort, who was assisted by Celine’s daughters, Chin-Chin and Apple.

Other tributes were made by Pilie Aquino, Cathy Saldana and Baby Espanola, and Cristina Caedo.

The speakers paid tribute to Celine as a “leader, organizer, as talented, loving, and compassionate.”

Celine was evidently touched as she shed tears of joy. Trivia contest followed with prizes donated by Nona.

A great way to end the fun birthday bash of the well-loved Celine Saldana Bautista!

The grand opening of Huma Mediterranean Cuisine recently spiced up the posh S Maison Mall at the MOA Complex recently.

Following the successful opening of its first restaurant Al Fairuz Lebanese Cuisine in SM City Clark, Huma Island Resort & Spa Palawan pulled out all the stops to make sure guests had a grand authentic Mediterranean experience. Well, believe me, palangga, they surely did.

With their preference for simple, fresh and natural dishes, businessman Dr. Hamad Al Tuwaijri and his wife Louisa El Chaer, the owners, decided to invest and open a series of Lebanese and Mediterranean restaurants around the Philippines.

Over a hundred personalities from various sectors of society were welcomed with Lebanese cocktails and special Huma drinks paired with delectable appetizers such as Falafel, Hummus, Fatayer Sabanek and Mussakan Chicken.

The place had a well-designed façade with Shisha pipes and custom-made glass lanterns highlighting the colorful interiors reflecting the rich culture of the countries around the Mediterranean Sea.

Madame Louisa El Chaer later talked about the inspiration for the restaurant.

Emcee was basketball coach-turned-businessman Rafa Dinglasan, who is of Lebanese descent, natch!