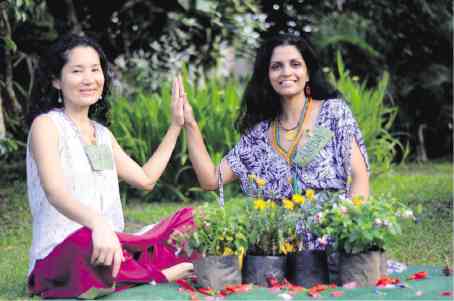 This 25-ha piece of rolling terrain in Silang, Cavite, is owned by Transnational Diversified Group (TDG), a conglomerate with businesses in shipping, logistics, travel trade and technology. Kai Farms is one of its agriculture ventures.

Our guide and Kai Farm official Amena Bal said that TDG chair Jose Roberto Delgado likes the baston de San Jose, which also has medicinal properties. The pink shades on the leaves evoke the healing color in the fourth chakra of the heart.

The entryway was an indication of the property’s advocacy.

A ditch, called a swale, was dug beside a knoll to slow harvest rainwater and preserve the soil.

One can hear the chirping from hornbills, orioles and hanging parrots, while a yellow-vented bulbul, known as the pulangga, swirled around the trees.

The produce are the result of  Kai Farm’s permaculture, a method of sustainable lifestyle anchored  on nature-based farming, soil and water conservation, and recycling waste. The term was coined in the ’70s as a linguistic combination of permanent agriculture and permanent culture.

The concept is more than just avoiding pesticides and disturbing the earth. The goal is to make organic food more accessible to people and to reconnect the community to the ecology that sustains them. It is based on the law of cause and effect: Take care of the earth and its people and the return is time, energy and money, food security and a better quality of life.

On its infancy stage, Kai Farms has been mulching, using dried leaves and grass over the topsoil. The decomposed materials maintain the soil’s moisture, boost fertility and keep weeds at bay.

The farm has been slowly developing different sections, starting with a Meditation Space where people can enjoy silence and connect with the earth. The pathways are lined with roselles and blue ternate flowers, both of which are infused into soothing teas.

In the nursery, seedlings are wrapped in banana leaves. They are transplanted to their respective plots once the soil is cultivated and the seedlings are just the right size.

Nature’s Lab consists of experiments with superfoods such as chia, adlai, kale, collards, Indian millet and mustard. Some sections carry names— Happiness for leafy vegetables, Knowledge for root crops, Wealth for squash, zucchini and okra, and Beauty for lemongrass and turmeric.

One of Kai Farms’ advocacies is to inspire Filipinos to grow more trees through its Living Museum of Native Trees. To preserve endangered heritage food, a section called the Ark of Taste is devoted to such crops as yellow ginger, purple yam and adlai. The Ark focuses on food that are unique in taste and specific to a region.

This “association” of harmonizing plants is a contrast to the yearly row-crop agriculture, with its processed soil and its constant need for labor and fertilizer. Studies have shown how chemicals in the soil and pesticides can weaken nutrients in food and affect digestion.

On the other hand, permaculture landscapes, which imitate the natural balance of the area, are designed to be self-perpetuating, the food sustainably produced and dense with nutrients.

Thomas Caristea, Earth Leader or farmer coordinator, has worked with other farms in Cavite before Kai Farms. He said these farms with their conventional methods suffered greatly during typhoons. But during the recent typhoon over Christmas, only branches from trees and banana stalks fell to the ground at Kai Farms.

What he likes best about Kai Farms, he said, is that between work, he can rest under the trees by the spring.

Ronald Alarca, another Earth Leader, had worked in rice fields in Tanza, Cavite. He and Aristea can now tell the difference in taste between organic food and commercial crops.

“Organic food are sweeter. When we started eating food  from the farm, we didn’t need to use flavored seasoning and MSG,” they both said in Filipino.

The event included soul dancing, the cleansing of the chakra  or energy centers, and the inauguration of the seed bank and the Living Museum of Local Trees. The highlight was a cooking demonstration by chefs, followed by a feast of organically made food.

It gave visitors an idea of what a low-impact lifestyle can do to nourish the body and soul.  —CONTRIBUTED