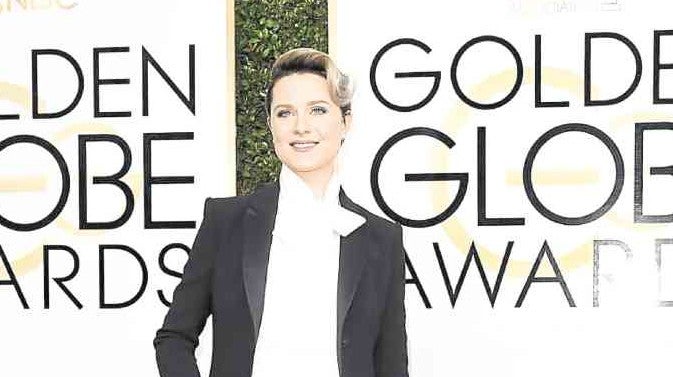 TUXEDO Evan Rachel Wood in a dashing tuxedo by Altuzarra

From predictable columns to cutting-edge cutwork: Fashion extremes at the Golden Globes

At last Monday’s 74th Golden Globes Awards Night of the Hollywood foreign press, we saw two distinct schools of dressing. The stark, strapless, minimal columns in primary colors, fully beaded sheaths and body-baring lace in nude, silver and white seemed out of sync and predictable. Designers and stylists who like it simple and safe became boring and badly fitted; their choices were so last year.

What emerged for the second group was truly original in design, involving cutwork and 3D embossed embellishments. This is called directional couture. Stars who wanted social media shout-outs needed gowns that stood out.

Instantly, Instagram and Twitter showed red carpet fashion for billions of fashion devotees around the world. Stars were quickly judged as Best and Worst Dressed. What was humorous was that a celebrity on one arbiter’s Hit List could be deemed a fashion victim in other media coverage around the world. This year, only a hairline that separated the Best and Worst Dressed.

Today we give you the fierce and fearless actresses who owned their evening looks, polished from head to foot with rock-sized jewels from Harry Winston, Cartier and Tiffany’s. One actor said, “We are like Cinderellas who, at the stroke of midnight, must give up our borrowed baubles to the burly bodyguards.”

The designs are intricate and well-cut, boldly executed and worn confidently by beautiful and talented celebrities. Their mantra must have been, when choosing their final outfit, it must get them to the top, without going over the top.