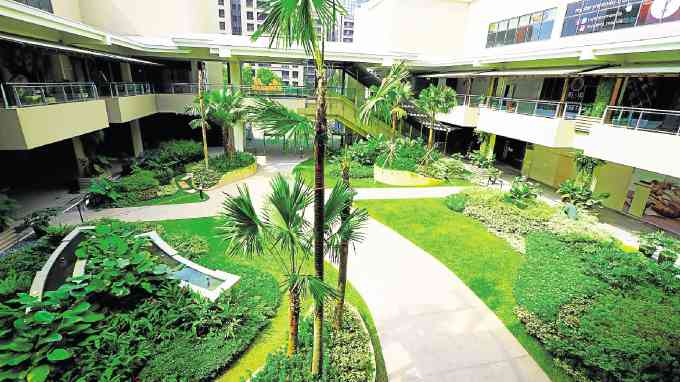 The “corte” or open-air patio of Ayala Malls The 30thwas purposely kept to a “manageable size.” —CONTRIBUTED PHOTO

Mariana Zobel de Ayala arrived at the hotel lobby quietly, with neither fanfare nor assistants, and ordered one coffee and sparkling water as she took a seat facing a corner.

Ayala Malls The 30th, the giant retail chain’s latest development, is opening this week in the busy and highly dense Pasig-Ortigas area—or three days after this interview. If the 28-year-old general manager was nervous about it, her shy but refreshing smile belied this.

“There are a lot of questions why we chose the Ortigas district because it’s such a dense area already, with SM Megamall, Estancia, the Podium and other malls. But with the more manageable size of The 30th, it’s easier to get around. It’s really testing a new format where people can stroll in for breakfast or coffee. Also, it doesn’t feel so overwhelming,” she said.

Located at 30 Meralco Ave. in the heart of Pasig City, Ayala Malls The 30th covers only two hectares. “A smaller mall,” Zobel admits, “but we’re really kind of hinging on this smaller consumable size for our position.”

The goal is to create a lifestyle community atmosphere where young professionals, students in the vicinity and families living in the nearby villages can enjoy outdoor spaces or  events and mall activities.

To test this new format, Mariana is already thinking of music and art expositions that customers would enjoy.

“I’m taking a lot of ideas that worked in Makati, where the flagship Glorietta and Greenbelt malls are located,” she said.

For example, Ayala Museum in Greenbelt allowed symphonic orchestras to use its space for rehearsals.

“People stopped by and enjoyed the music. Little things like that have worked. We want to bring that and do it here. We are also talking to artists for some kind of softer installation art in our mall that does not compete with those of bigger art galleries.”

Since she’s a scion of the clan leading  in the property and mall development in the country, Zobel’s involvement in The 30th is no surprise.

Her social studies degree  from Harvard University allowed her to read up on social theory, which she summed up as “why people interact like they do, how capitalism came to be, what’s really the foundation of our economic society,  political society, how governments came to be.”

While other students pursued “more profession-specific” courses like business or medicine, Mariana felt that hers pushed her to “stretch my thinking and my own assumptions. It applies to what I do now.”

Mariana spent time in New York after graduation, familiarizing herself with investment banking at J.P. Morgan  before returning to Manila four years ago. Her first assignment was with corporate strategy in Ayala Corp.  She described those years as “a jumping ground for management training.”

She eventually moved to Ayala Land Inc. as a management trainee, focusing on Alveo Land Corp., which was being eyed as a specific business unit that would become her expertise.  Mariana spent one and a half years on project development there.

“We have a business development team that takes a plot of land and studies it. ‘Would this be good for residential or commercial office space?’ Then we pass it on to project development. Our group would solidify the financials. ‘How much do we spend on construction? How much on marketing?’”

Her stint allowed Mariana hands-on experience in the development of Alveo Financial Tower on Ayala Avenue and a residential project called Vertis North next to Ayala Malls’ Trinoma Mall in Quezon City.

Now that she’s moving from real estate to retail as “part of my rotation,” how is that going to be different?

“The malls were part of our first businesses. It’s very different. With residential, it’s a sale.  With retail, our interaction with clients and customers is longer-term. Here in Ayala Malls The 30th, my role would be more of operation, day-to-day management,” she added.

Mariana pointed out that two of the cinemas have recliner seats, while two others are equipped with the Dolby Atmos sound system.

“The lower ground is more service-based with the salons, the banks, Rustan’s Supermarket, quick-in-quick-out area. The ground and second floors feature restaurants and also retail, kind of more high street. Next to the theaters is the Restaurant Row that has the new, hipper, up-and-coming restaurants that we asked to do on a small format,” she said.

Mariana’s calm aura makes one marvel at how she is able to balance managing The 30th and taking care of a newborn baby. She admitted, though, that “the timing is tough. Kind of taking care of two babies at once.”

Still, she feels blessed to be part of a corporate team “good enough to give me time to spend with him.

“I think I’m probably in a better situation than most because I have a lot of extra hands. My mom (Lizzie Zobel de Ayala) has time now to devote to the baby so she tells me I can just drop him off at her house,” Mariana said.

She recalled that while pregnant, many of the working mothers in the office who have climbed up the ranks were excited about her baby, considering the birth date coming so close to the mall’s opening as a fortuitous sign.

“Ayala Malls specifically has a history of very successful mothers in leadership. I have so many great examples in my organization. Also looking at my mother, who worked while raising us as well, I’m very lucky that there is a lot of support.”

As it is, becoming a new mother is already making her more conscious about this demographic. During the interview, Mariana mentioned specifically that part of The 30th second level is “dedicated to kids.”

“For a long time, I was a consumer at my age level—a young, working executive—and now I’m kind of shifting my consumer mind-set. You’re limited to your own knowledge of the market, your own understanding and habits, and in one month, I’ve already seen it change. So it will be fun to continue to grow.”