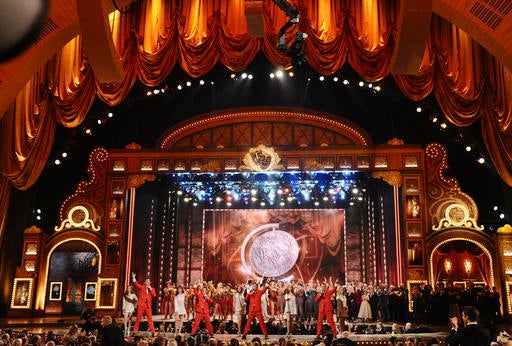 In this June 7, 2015 file photo, the cast of "Jersey Boys" performs at the 69th annual Tony Awards at Radio City Music Hall in New York. The American Theatre Wing and The Broadway League said Thursday, Jan. 12, 2017, that the telecast on June 11 will originate from the 6,000-seat Radio City Music Hall, the show’s long preferred home because of its size and proximity to Broadway. AP

NEW YORK — The Tony Awards are going back to their old — and much larger — stomping grounds.

The American Theatre Wing and The Broadway League said Thursday that the telecast on June 11 will originate from the 6,000-seat Radio City Music Hall, the show’s long preferred home because of its size and proximity to Broadway.

Last year, the Tony Awards were held at the 2,900-seat Beacon Theatre on Manhattan’s Upper West Side, where the Tonys were also handed out in 2011-12.

Radio City seemed to be out of the question because MSG Entertainment had said it wanted to use the theater each summer for its annual “New York Spectacular.”

But the company said Thursday it will bring back its summer show, just push it back a little to start June 30. TVJ