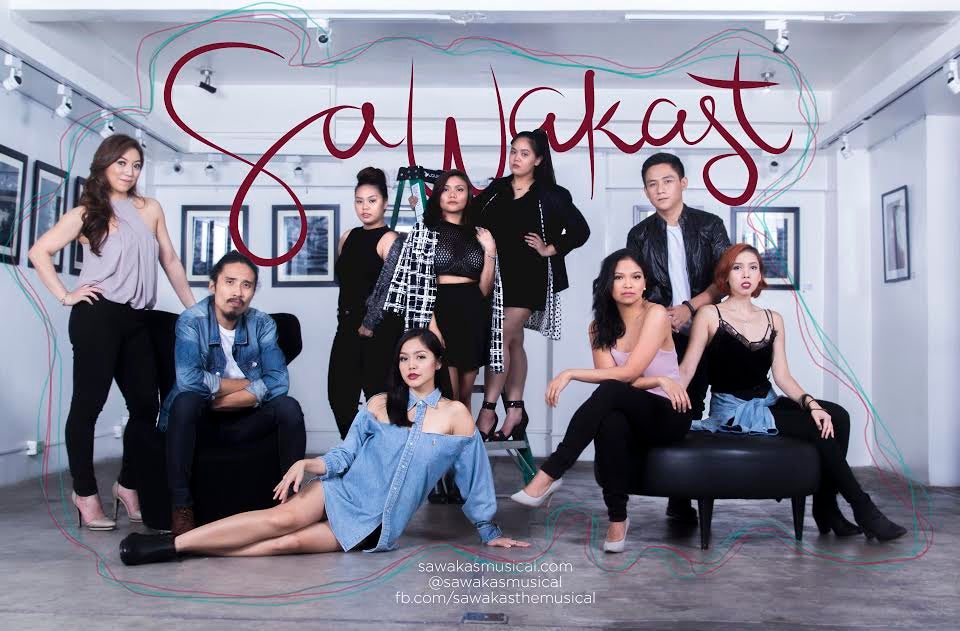 If you love two people at the same time, choose the second. Because if you truly loved the first one, you wouldn’t have fallen for the second.”

This overused and much-abused Johnny Depp quote may have helped a bit the male lead character of the ongoing “Sa Wakas: A Pinoy Rock Musical”—but we’re getting ahead of the story.

Over three years after its initial run, “Sa Wakas” is back on stage, with 24 performances spread out over four weeks at the Power Mac Center Spotlight in Circuit Makati, until Feb. 5.

Hits like “Wag Ka Nang Umiyak,” “Hari ng Sablay” and “Makita Kang Muli” have become theme songs of popular soaps or films. These songs were woven into a story set in contemporary Manila and populated by young characters; when mounted, the show became one of the most talked-about Filipino musicals in 2013.

When Sugarfree disbanded in 2011, it had released five albums with more than 50 songs composed by Dancel, who has since embarked on a solo career.

About a year later, theater lover and Sugarfree fan Charissa Pammit thought of creating a musical using the band’s songs as a personal tribute. She was on a monthlong stopover vacation in New York after finishing a film-TV-production course in UCLA when she met up with Andrei Nikolai Pamintuan, an old friend from her Ateneo Blue Repertory days.

“My idea was something like ‘The Last Five Years’ using Sugarfree songs,” recalls Pammit. “It was more of a conversation on how we wanted to do the show together.”

Having been in the United States for some time after college, Pamintuan admitted he was not that familiar with Sugarfree, so he sought out the help of a friend, poet-playwright and another Sugarfree fan, Mariane “Ina” Abuan.

Thus was born the three characters in a love story gone haywire: Topper the photographer, torn between free-spirited writer-editor Gabbi and the ambitious medical doctor Lexi. All three are in their late 20s, just like the musical’s creators.

Pammit and Pamintuan admit the characters were based on the lives of people they know, and some scenes taken “from their own experiences.”

As dramaturg, Pammit wanted the story to flow as naturally as possible, so some of the chosen songs in the first draft surprised Dancel. “He would ask why we were using this particular song when he had others songs that were more popular,” she recalls.

But they had to tell a story first, she says. “So it’s not pilit (forced). It’s a good thing that out of the 50 songs Ebe composed for Sugarfree, you have breakup and falling-in-love songs, songs about longing, fighting, being snarky. He had covered the entire range and all the stages of a relationship.”

They chose 20 songs that they thought would best fit the story. Dancel also composed a new ditty, “Bawat Daan,” exclusively for the musical. Staged readings with student audiences were held in Ateneo to get feedback, which explains how the target market helped create the final draft. Ejay Yatco, also a Blue Rep alumnus, did the musical arrangements.

“Sa Wakas” had 12 sold-out performances for three weekends in April 2013 at the Peta Theater. Most critics used the word “groundbreaking” to describe the show, not least because an original Filipino rock musical was tackling love and infidelity with a contemporary lens, through characters referred to now as millennials.

“Four years ago, we called them hipsters,” recalls Pamintuan, chuckling. They are young professionals eager to conquer their dreams, but also find themselves adrift in their quest for love in the age of technology, pop culture and social media.

The original run ended without an extension; there was no available venue and the cast members had other commitments, explains Pammit. But then, “it came to a point where we couldn’t wait for anyone anymore. If we don’t do it now, we will never do it.”

For the rerun, Yatco has assembled a seven-piece band.

“Since the script has also changed I’ve updated the musical arrangements to accommodate them,” he says. “I would say musically, mas may hugot siya ngayon. We removed ‘Hintay’ and ‘Dramachine.’ Then we added ‘Kung Ayaw Mo Na Sa Akin’ and ‘Huling Gabi.’”

Abi Sulit, Hans Dimayuga, Laui Guico and Moira Lozada are in the ensemble. As with the first run, Pamintuan is directing this musical, now presented with the Manila Fringe Festival. He is grateful to share “Sa Wakas” once again with audiences.

“We have all been in relationships and have experienced the ups and downs of what it’s like to love and be loved, so it’s a chance to tell a story that explores the complexities of being in a relationship, messing up, and in the end knowing one’s self.” —CONTRIBUTED