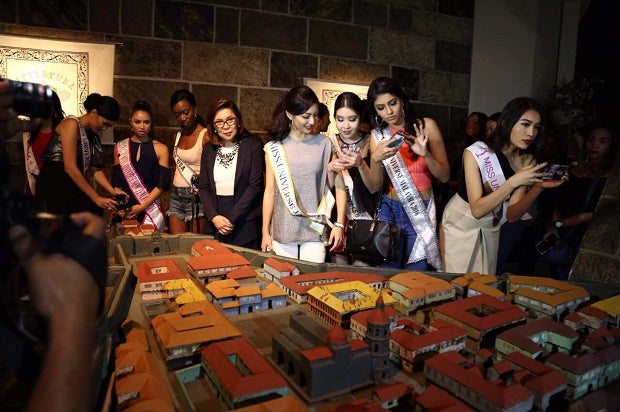 It’s an elegant competition where poise is a premium, but with all the hectic activities lined up for contestants from around the world, the 2017 Miss Universe pageant might as well be an amazing race for the coveted crown.

More than two decades since last hosting the Miss Universe pageant in 1994, the Philippines again laid out the red carpet for over 80 delegates from around the world, who will face a grueling prepageant schedule that will test their stamina, patience and overall charm.

A string of photo sessions in historic Intramuros in Manila starts off the quest for the crown, to be followed by a beach romp in Boracay, a fashion show in Vigan, a governor’s ball, a swimsuit competition in Cebu, a benefit dinner, an island tour of Iloilo and Davao, a special luncheon and several charity events.

On Saturday, some beauty queens will experience living in paradise on Boracay—voted “best island in the world” by Conde Nast Traveler users—in a kickoff party hosted by Solar Entertainment Corp., the official broadcast arm of the competition.

On Sunday, another group of contestants will be whisked off to Vigan City in Ilocos Sur for a special Philippine terno show.

Outgoing Miss Universe Pia Alonzo Wurtzbach officially commences the final stage of her reign on Monday during a “Governor’s Ball” at SMX Convention Center in Pasay City, with Miss Universe aspirants joining her.

The contestants will be flown to Cebu City on Tuesday for a special swimsuit competition at JPark Island Resort. The following day, the summer capital of the Philippines, Baguio City, will host a benefit dinner for the beauty queens.

Also on Wednesday, some of the contestants will be taken to Pico de Loro in Batangas via the “Miss Universe Yacht,” while another batch will fly to Iloilo City for an island tour. A third set will visit Davao City.

Wurtzbach is also set to join eight selected contestants for a charity activity with Smile Train on Friday morning in Manila. The Miss Universe contestants will join her as well for a special luncheon hosted by Solar Entertainment at the Manila Hotel.

The reigning beauty queen will then go solo in the afternoon at the MAC Aids Fund activity at S Maison Mall of Conrad Hotel in Pasay City.

The contestants will join her anew in the evening for a program called Queen of the Universe at a location yet to be disclosed.

On the same day, a group of contestants will meet officials of Philippine Airlines, the official carrier of the 65th Miss Universe pageant in Manila.

On Saturday morning, Wurtzbach will fly to Coron, Palawan, to take part in a charity event for Cordaid, the philanthropy partner of the Miss Universe Organization for several years now.

The reigning Miss Universe will fly back to Manila that same evening for a dinner hosted by Okada Casino and Hotel with 44 selected contestants.

On Jan. 23, the beauty queens will visit President Duterte in Malacañang in the afternoon. They will later be joined by Wurtzbach in the evening for the national gift auction dubbed Women on the Move at Conrad Hotel.

On Jan. 24, the World Trade Center in Pasay City becomes a blur of color showcasing diverse cultures as candidates flaunt their national costumes in an evening festival.

All the months of preparing for the contest will come to a head after the national costume festival, when the Miss Universe preliminary competition is held at SM Mall of Asia Arena in Pasay City on a date that will be announced later.

The preliminary portion determines a big part of the scores in the beauty pageant, as the contestants parade in their gowns and swimsuits. The closed-door panel interview with the judges has yet to be scheduled.

The hectic schedule will culminate on Jan. 30 at the coronation ceremonies, where Wurtzbach will take her final walk and crown her successor at SM Mall of Asia Arena. The 8 a.m. program will be beamed live to at least 190 countries.