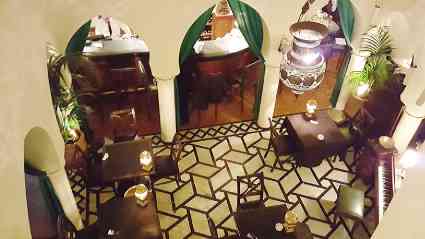 “The fundamental things apply, as time goes by” —a view from the second floor of Rick’s Café

It’s been a dream to travel to Morocco, the farthermost western tip of the Arab world in the Maghreb, and then crossing over to its northern neighbor of Spain.

Thanks to a route of Royal Air Maroc to Italy, a side trip to the fabled kingdom finally enabled me to fulfill this ambition in late autumn of 2016.

Serendipitously, it coincided with the holding of the Cop22, the UN environmental conference in the Moroccan city of Marrakesh in November. Although not a participant, I was nevertheless able to get a sense of the importance of this conference to Morocco and to the world in the age of climate change.

With its dazzling blend of East and West, of African, Arabic and European cultures, Morocco was indeed an appropriate venue to host such a meeting. Morocco is a picture of modern progress overcoming such daunting challenges as extreme weather and geographic conditions.

For Filipinos, Morocco may seem to have been at one point finis terrae, the end of the earth, or as remote as Timbuktu (which Moroccans once ruled) or Mauretania (whence derives Moro, the Filipino term for Moslem).

Unexpectedly, it has more links than may be expected, to place names that are echoed in the Philippines—such as Tetuan, a battle in which the Spanish triumphed and is commemorated in the pediment of the San Joaquin Church in Iloilo; the famed Casablanca and Rabat (a family name in these parts) and a tiny Spanish-speaking minority.

In Spanish times, marroquineria was a familiar word, meaning leather goods sometimes embossed or finely gilded and decorated. We share with the Moroccans, as well as with (at least in older parts of our cities) the Spanish inner patios, wrought-iron clad windows  and palm tree-lined boulevards.

Morocco was indeed the point of entry of Arabs to Spain and Portugal when, in 719, the Moslems—with a significant Berber contingent—conquered  Toledo, capital of what had been the Visigothic kingdom of Hispania (itself a previous part of the Roman empire), and transformed it into an important outpost of Islam collectively known as al-Andalous (the origin of Andalusia).

What followed was 800 years of Islamic occupation and the Spanish resistance known as the Reconquista, ending in the capture of Granada by the Catholic Kings in 1492.

The splendid courts of such Moroccan dynasties as the Almoravids and the Almohads, with their ties to and influence in Cordoba, Sevilla and Granada, were indeed a vital link in civilization.

When Europe was still mired in the Middle Ages, Islamic cities in Spain as well as in Baghdad, Cairo, Aleppo and Alexandria helped preserve the intellectual tradition of Greece and Rome through translation and preservation of classical sources. They also pushed the boundaries of science, technology and philosophy through their own thinkers and theoreticians.

This gave the Spanish a leg-up when they began conquering the Atlantic and America in 1492; they had access to Islamic know-how and technology, to their maps, histories, naval instruments and maritime experience.

In different periods, Fez, Marrakesh, Rabat and Casablanca would flourish as cultural or political capitals of a Morocco that waxed and waned according to the strength of the dynasties, and, in the 20th century, of colonial regimes that briefly ruled it.

Landing in today’s Casablanca yields not quite the same impressions as in the self-titled classic 1942 film starring Humphrey Bogart and Ingrid Bergman.

Modern, prosperous and beautifully garnished, it reflects its multicultural heritage in a unique and splendid way that we could well emulate. The white houses of the casbah and the souk are still there, alongside art deco and modern edifices carefully designed to harmonize with the total ensemble.

Casablanca is Dar-el-Beida in Arabic, literally meaning white house, which was duly translated into Spanish.

Although Morocco’s official languages are Arabic, Berber and French, Spain and Portugal have played a longer role in the intertwined history of this Maghreb nation, today considered a pillar of stability in North Africa.

Turning the tables around,  Catholic Spain started its relentless reconquest toward its own Muslim South—Muslim and Jewish exiles seeking refuge in Morocco, forming an Andalusian Quarter in Fez.

If Casablanca seems to display more European panache than Morocco’s other cities, it is because the present city was  founded only in 1912 and functions as its economic capital, complete with a stock exchange.

When the Alaouite Dynasty returned in 1956 once Morocco regained its independence from France, it provided a stable monarchy that has wisely guided the country since then. King Mohammed VI, its present monarch, deftly steered the nation with liberal reforms through the Arab Spring that rocked the Mediterranean and was instrumental in the recent Cop22 meeting.

The city is not bereft of splendors, such as the Hassan II Mosque, the third largest in the world after Mecca and Medina. Completed only in 1993, it shows nevertheless the timelessness of Moroccan art and crafts, with its intricately carved stucco, mosaic tiled work called zellj, and precious onyx and marble surfaces.

At the other end of the corniche (what Roxas Boulevard could have looked like, had there been no reclamation project) is the Morocco Mall for families, which proclaims that globalization has arrived in Morocco, too, though with a touch of French chic.

Nightlife reveals Casablanca’s more mundane and bohemian side. Yes, there is a Rick’s Café with a grand piano and a cello. No, the pianist Sam in the “Casablanca” film no longer plays there, although it is rumored that, occasionally, “Issam” comes around while jazz musicians and soloists provide background music to a tidier and more compact dining area, where, among others,  a classic couscous is served.

No gambling here either!  But overlooking the central dining area is a second floor balustrade area where the film plays 24/7 and its central characters are immortalized in iconic photographs.

Casa José is a Spanish tapas bar across the medina, or bazaar, where the youth congregate and partake of the latest Iberian amuse-bouches. The Restaurant du Port de Peche is the top seafood dining place in the city, which may also rank among the best in the world.

There is also a surfeit of excellent French, Italian and Moroccan restaurants and specialized ones including vegetarian, Thai and Japanese cuisine.

One could well end an evening with a relaxing scrub and massage in the public hammams or private spas which dot the city in a tradition that may well date back to an Arab version of the Roman baths, although more miniscule, confined and utilitarian.

With decorous men’s and women’s times and sections, the hammam reminds us of State-sponsored centers of social life and daily hygiene initiated by the Romans.

Fully contrasting with the bureaucratic capital city of Rabat and the modern business center of Casablanca is Marrakesh, beloved of both luxe and off-the-beaten-track tourists.

Marrakesh does not fail to live up to one’s expectations and more. While it would be tempting to stay in a multi-stellar hotel such as the Mamounia, where Alfred Hitchcock stayed while writing the script of “The Birds,” a better way to experience the city in all its vibrancy is to stay in a riad—dwellings converted into boutique hotels with   rooms lavish in mirrors, tiles, cushioned areas, fretted windows and wonderful hanging Moroccan silhouette lamps.

Mine was adjacent to the Mamounia hotel, offering views of its gardens. I understood why Hitchcock wrote his Marnie Nixon classic since the feathered creatures manifested no fear at all of pecking away at the fresh bread even while I was seated at the breakfast table.

Considering that we now know that birds are the descendants of dinosaurs, Hitchcock was indeed prescient in proposing that they might wreak their revenge on us, based on a possible avian encounter in Marrakesh.

Our riad was adjoined to the King’s residence and was noteworthy for its simplicity. Since Moroccans favored social equality, they kept their façades as simple as their poorest neighbors and only lavished their display in their interiors.

Deceptively plain from the outside, riads are amazingly beautiful on the inside, lovingly restored today by Moroccans and foreigners alike.

We were fortunate to be close to the main square of Djemaa el Fna, designated as a World Heritage Site,  a place where the caravans congregated after their long treks across Africa. It is still the site where storytellers meet to exchange tales and snake charmers  put their wards through their paces.

We treated ourselves to lamb that had been baked overnight in a deep well, patronized by chef Jamie Oliver of British TV fame.

We relished this while enjoying such a view as the Al Koutoubia mosque whose tower is the twin of the Giralda in Seville.

Had we been ravenous, we could have gorged ourselves as well on grilled mince meat, sausage, brochettes, couscous  and Moroccan salad while downing this with mint tea.

The medina is where fantasy shopping is realized, with all sorts of goods divided into neat sections for rugs, filigreed lamps, leather goods, ceramics, perfumes, spices, wood, textiles and argan oil.

We discovered argan oil, derived from a spiny tree that flourishes well only along the Atlantic coast of Morocco, where it has been growing for 25 million years.

Also known as Berber gold, it is both a cosmetic agent curing all types of ailments and skin afflictions as well as a culinary ingredient. With scientific bolstering of its ingredients, argan oil is now known worldwide and marketed as a quintessential Moroccan product.

A visit to Morocco would not be complete without going to its palaces and fabulous gardens. We toured the La Bahia Palace (which once housed a harem), the Saadian tombs (from the 16th-century Saad dynasty) and the Ali Ben Youssef Medersa (madrassa or religious school). As many as 900 students from all over the Muslim world studied here in a 16th-century Koranic school.

A sine qua non of jardinophiles is the Majorelle Gardens, created by the French painter Louis Majorelle between 1922 and 1962.  With a dramatic deep-blue villa as its centerpiece (blue being regarded as a protective color against the evil eye by the Moroccans), the garden abounds with bamboo groves, cacti, lily ponds, palms and all varieties of exotic plants.

On Majorelle’s demise and an interim of decay, the house and garden were purchased by fashion designer Yves Saint Laurent and his partner Pierre Berger. They must have enjoyed many blissful moments of creativity and imagination.

A broken column marks a spot where YSL is commemorated.

There is also a significant Berber museum here which displays artifacts from this desert culture, which is often ignored in the wide splendid tradition of the Arab world.

Before heading back to Casablanca where most international flights are located, we headed out of town to experience the Atlas Mountains and the Cascades de Ouzoud,  where raw nature could be viewed in the desert and then the blessing waters of the falls originating in the mountains.

The Sahara and the Atlas Mountains meet  at their confluence.

Morocco can only be described as a rich tapestry of history and culture stretching back into time, whose hospitable people have kept alive through various vicissitudes.

Other destinations such as the Roman ruins of Volubilis, Essaouhira, the blue painted village of Chechouan, Tangier, Agadir, Meknes still beckoned for another day. —CONTRIBUTED