From the slopes to the big, bad city on a bike | Inquirer Lifestyle ❮ ❯ 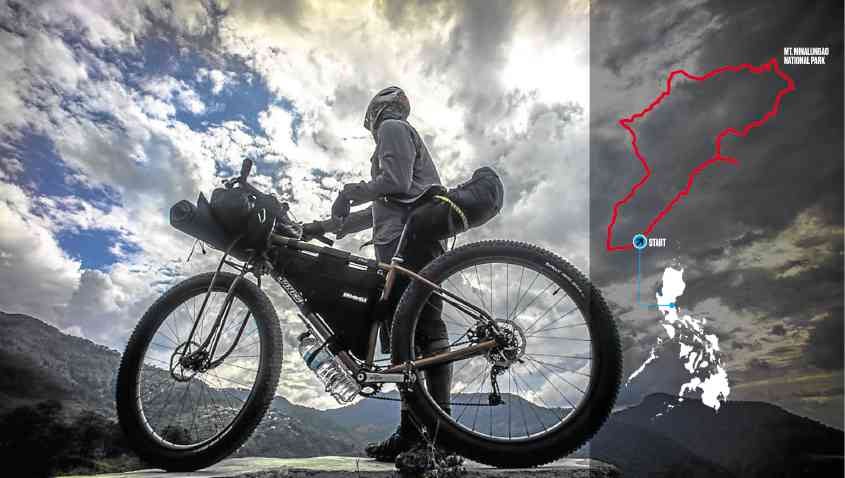 57 kilometers The loop begins at San Miguel town in Bulacan and snakes through unmarked mountain trails into the Minalungao national park in Nueva Ecija and back.

From the slopes to the big, bad city on a bike

DOÑA REMEDIOS TRINIDAD, Sierra Madre—It was a crazy idea for a weekend getaway: five grown men to cycle across an unchartered, rugged mountain pass that cuts across the Luzon provinces of Bulacan and Nueva Ecija just to take a dip in a remote, crystal clear lake.

Tiny rocks and loose dirt whipped my face as I hurtled down a steep 45-degree incline on the Sierra Madre mountain range, the noonday sun pressing down like a monkey on my back. One slip could potentially lead to sudden death.

News photographer Jes Aznar had plotted this route earlier. The plan was to pedal a 57-kilometer loop that would take us from San Miguel, Bulacan, through unmarked mountain trails into the Minalungao National Park in Nueva Ecija and back.

We figured it was going to be easy, and planned to spend much of the afternoon lolling about in the picturesque Minalungao river.

So we packed five mountain bikes and drove out at dawn to a farm owned by the family of the late Joe Burgos, an icon in Philippine journalism who bravely fought the Marcos dictatorship.

This was a fitting start, considering the tour begins at DRT, or Dona Remedios Trinidad, a remote, mountainous place named after Imelda Marcos’ mother.

The kickoff was relatively easy. It was cloudy, and the wind was on our backs in the first two hours, gently prodding us along.

The first hint we were in for a tough ride was when we reached a dry river bed instead of the Bulo dam in San Miguel’s interior area. Too late to realize that maps measure distances in points along a flat grid, and oftentimes do not indicate altitudes.

We all thought it was a slight glitch to the overall plan. After all, our jobs have taken us to extreme scenarios.  You worry a little at best, and throw caution to the wind.

The scenery was simply astounding. The first gradual climbs took us to rolling slopes, blanketed by trees. In the distance to our left was Mt. Arayat, its majestic peak looming over the central plains under an unending blue sky—a painting waiting to be put on canvas.

This part of the Sierra Madres is still under the jurisdiction of DRT, a sprawling, impoverished municipality, where communist guerrillas are known to operate.

It is on the southern edge of the mountain range and encompasses a huge reservation and a major watershed that supplies the lowlands with water and life.

Less than 20,000 people live here, most of them in ramshackle homes on the lower slopes.

Residents have to walk half a day for potable water, and there are no emergency relief services or clinics for those who fall ill, or have a serious bike crash.

Small barefoot children, apparently not used to helmet-wearing men on bicycles with strange looking contraptions, ran for cover as we passed by.

One smiling woman tentatively approached as we rested after a long climb and asked, “Nag-aarea po ba kayo? (Are you conducting an area survey?)

The question was meant to find out whether we were military spies, plotting grids on the map.

Anyone not familiar with the history of the local communist insurgency could interpret the question innocently, but not those who regularly hear military parlance on the job.

Communist New People’s Army guerrillas, who have been waging one of Asia’s longest running insurgencies, are known to operate in these parts.  While we did not see any M-14 wielding rebels, we knew they were around, hiding among the hardy mountain people who regard them as folk heroes akin to Robin Hood, providing necessary services in an area where government presence is woefully lacking.

We asked the woman whether there were more punishing climbs ahead.  She was all smiles, and said “Marami. Maraming-marami pa.” (Plenty more ahead).

Eric Sales, a veteran touring cyclist, was the group’s unofficial pacer. He made sure no one lagged too far behind, and ensured that breaks were kept at a minimum after we overshot the planned ride time by more than two hours.

None of us were very experienced downhillers, and the prospect of ending the tour with a broken bone or a cracked skull was unappealing.

Relief came when a cluster of huts told us we were nearing civilization.  We were spent, but happy.  There were no broken bones and no funerals, except wounded pride for having miscalculated the ride time.

Back in the city, Sales starts his day by weaving across Manila streets to the Asian Development Bank, where he works in the media department.

He has been bike commuting since 2012, a daily exercise that has taught him to appreciate more the little things in life.

“I have been biking since February 2012 and started bike commuting since the day I got a steel bike,” he said. “Before the end of that year, I did bike touring and got hooked.  Now I have two bikes: a city-specific bike for urban riding and a touring-specific bike.”

With the city’s road traffic often reduced to a crawl, biking is “the most efficient way to travel from points A to B,” Sales said.

Fellow biker AB Arias, an information technology expert, knows the dangers of bike commuting first hand. He was hit by a car which countered the traffic flow, whose driver tried to evade capture by traffic enforcers. He was not injured and the bike was only  damaged slightly.

“I just got fed up with the daily stresses brought about by the metro traffic,” he said.  “It takes me 30 to 45 minutes to commute at any given time of the day. Driving my car will usually take me an hour on a good day, and up to two hours on a bad one,” said Arias, whose accident strengthened his resolve to spread the gospel of biking.

“It all boils down to available facilities. When shower and ample bike parking facilities were made available in our workplace, there was no thinking twice—I swapped petrol for pedal,” the 36-year-old father of three said.

Metropolitan Manila Development Authority (MMDA) assistant general manager Julia Nebrija, a cycling advocate, said Manila has the potential to be another bike-friendly capital, similar to Tokyo and Denmark, where the culture revolves around the two-wheeled contraption.

“Thirty-five percent of destinations in Metro Manila are a 15-minute walk or bike trip, so for many of our daily movements, biking is an ideal way to go around the city, especially since it is mostly flat,” she said.

Currently, bike-related projects around the mega city are in the works. This would include more bike lanes, greenways, bike parking, bike share system expansion and supporting amenities such as shower facilities for employees, she said.

“I’ve explored parts of the city on bicycle that I might have never visited or known about otherwise, such as the winding streets around the historic parts of old Manila and the waterfront areas of Laguna Bay,” the MMDA official added.