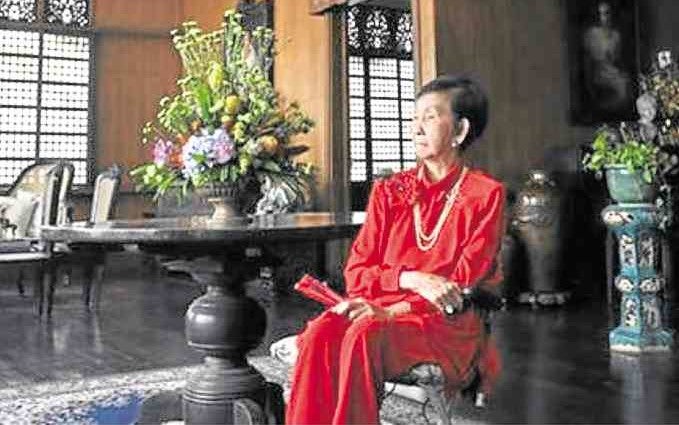 A file photograph of the late Eloisa Gomez at BaleMatua

When a Kapampangan remembers his late mother

Having been married to a Kapampangan, I had gotten used to seeing buffet tables groaning with food. But the quality of the food served on Jan. 2, on what would have been the 96th birthday of the late Eloisa Paras Hizon Gomez, beloved mother of Dom Martin Hizon Gomez—the former celebrated couturier Gang Gomez, who is now a Benedictine monk based in Bukidnon—was something else.

There was, of course, a green salad to mitigate the richness of the dishes. For dessert, there was the Kapampangan favorite, Bibingkang Duman (a delicious, sticky kakanin that’s made of black pinipig, reportedly costing P1,000 a kilo, with latik on top), Tibuk-tibuk (carabao’s milk custard with latik), and Sans Rival.

Some of the ladies in our group needed to change from their travel clothes to the Filipiniana attire that was de rigueur or specified by the invite to the Hizon family feast. Although the owner of the house, the family of Dely Lazatin Panlilio Fernandez, was not around, the staff kindly served us a yummy Taisan, purchased from across the street, at the Essel bakery. We also picked up our preorders of the famous big ensaymada that is its pride.

The Bale Matua was simply “awesome,” as my grandchildren would say, with gleaming chandeliers, antique and heirloom furniture in a grand sala and formal dining room, a smaller comedor (dining room), an azotea, five bedrooms, plus a small private chapel with a century-old image of the Virgen de los Remedios, patron of Pampanga.

The portrait of the manse’s owner, Eloisa Hizon Gomez, Dom Martin’s beloved Mama, is displayed in the primera sala. It was rendered by foremost Los Angeles-based Kapampangan painter, Rafael Maniago.

As per Dom Martin, the house was declared a heritage building by the San Fernando Historical Commission. He remarked that they open the house only for special family gatherings like his mother’s traditional Filipiniana birthday celebration on Jan.  2, the annual Good Friday procession to accompany the family’s image of San Pedro, which also serves as a mini-family reunion, and whenever balikbayan relatives are in town.

As soon as the help was told of the celebration on Jan.  2, they had all jumped into action, sweeping and polishing floors, dusting furniture, making the glassware shine and polishing the silverware.

At 6 p.m., a Mass was concelebrated by family friends Fr. Mon Torres and Fr. Daines in the silong or entresuelo. Thereafter, the 150 or so famished guests ascended the grand staircase for the buffet dinner, staged in three contiguous rooms, consisting of a grand sala and formal dining room lit by ornate heirloom chandeliers, and a smaller comedor, spilling out into the azotea.

The Arti Sta. Rita choir entertained guests with their harmonious voices. Dom Martin was especially pleased when they sang his two compositions, “Eloisa” and “Hizon,” both composed to honor his Mama.

Because the occasion was a family reunion as well, there were the Hizon relations: cousin Monette Enriquez and nephew Councilor BJ Lagman, former Bb. Pilipinas and niece Lullie Enriquez, and Rolly and Ana Rodriguez, among others.

Truly, to remember and celebrate a mother’s birthday, though she no longer walks the earth, is an act of filial love and devotion, for which Dom Martin has surely received a shower of heaven’s blessings. —CONTRIBUTED