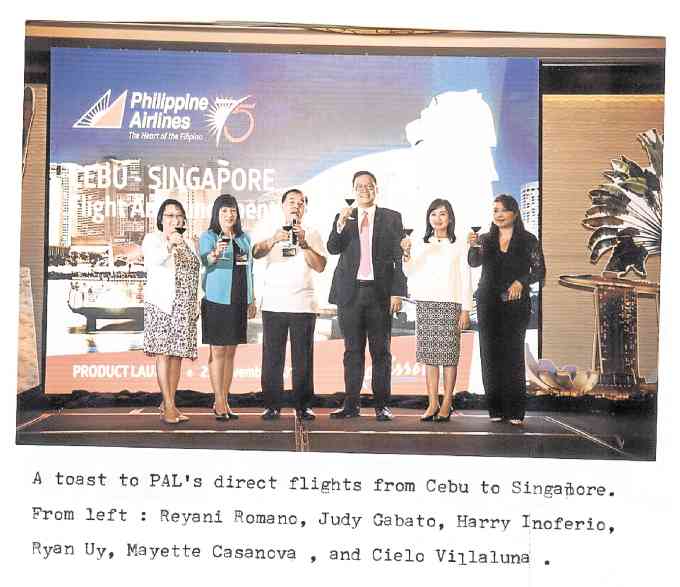 That was quite a celebration for Philippine Airlines (PAL) when it launched flights from Cebu direct to Singapore and back four times a week. Venue was the Niña ballroom of the Radisson Blu Hotel, where a brief program with toasts was held.

Among the travel agents were Gwen Po, Rosie Mancao, Aida Uy, Sheila and Carlos Colmenares  and Angelita Dy. Earlier there had been a press conference where business class tickets to Singapore were raffled off and won by Cookie Newman and Leilani Paredes.

PAL’s departures for Singapore are at 10 p.m. on Mondays, Wednesdays, Fridays and Sundays, arriving next day at 1:45 a.m.

The trip back departs from Singapore to Cebu at 2:45 a.m. on Tuesdays, Thursdays, Saturdays and Mondays, arriving same day at 6:45 a.m.

Also launched on this occasion were flights from Cebu to Caticlan (the most convenient connection to Boracay) and onwards to Clark, with daily departures at 8:40 a.m. 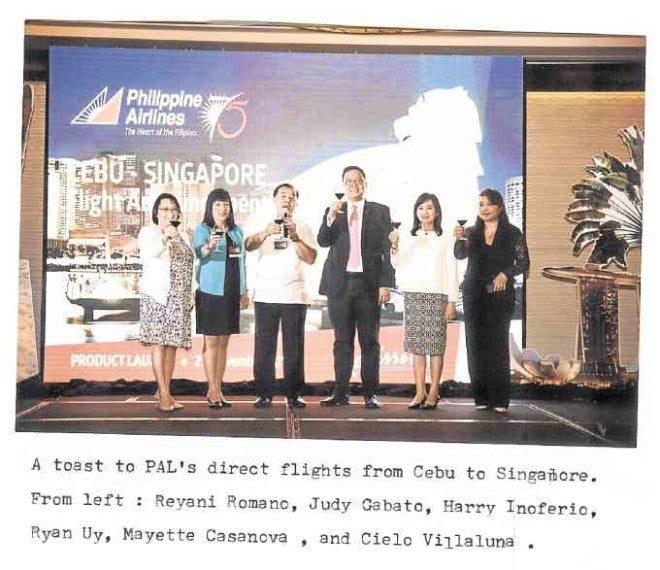 The birthday of His Majesty the Emperor Akihito of Japan was celebrated with a glittering diplomatic reception at the Marco Polo Plaza Hotel and attended by a cross section of the Cebu Community.

Hosting were Atsushi Veno, the Japanese Embassy’s deputy chief of mission; and Chiharu Tsuruoka, the new consul of Japan in Cebu.

Julie Najar, general manager of the Marco Polo, was present as were resident manager Xavier Masson, sales and marketing director Lara Scarrow, and communications manager Manna Alcaraz, who were in the lobby to welcome the VIPs.

More: Jojo Bersales of the University of San Carlos Press, which has just launched a book on the late Cebuano painter Martino Abellana, faithful student of Fernando Amorsolo; and Gwyn Underwood, the new superintendent of the Cebu International School.