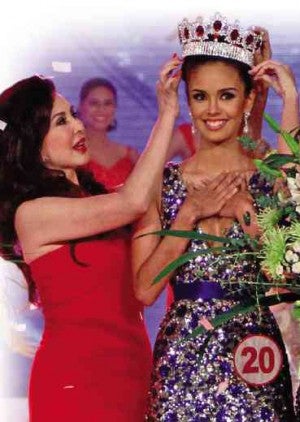 Just as the Miss Universe pageant is rolling out its recent edition in the Philippines, Miss World Philippines head Cory Quirino dropped a bomb that will surprise Filipino pageant fans.

“I have decided to relinquish the license of Miss World Philippines for both personal and business reasons,” Quirino said in a text message sent to the Inquirer.

“Thank you for supporting me all these six years, and for being part of our challenges and victories. I will never forget you,” she added.

Now that she has left the pageant scene, Quirino said she would “focus on major projects held in abeyance” when she joined the industry.

Quirino, who is also an Inquirer Lifestyle columnist, said she would continue to promote health and wellness on a national scale through her column and radio program and would continue advocating corporate social responsibility.

Quirino is a member of the Rotary International District 3830 and the director of Red Cross Muntinlupa.

She is also a staunch supporter of the PGH Medical Foundation and the Tuloy Foundation.

Quirino received the local franchise for the Miss World pageant in 2011, after it was held by the Binibining Pilipinas Charities Inc. from 1992.

The Miss Republic of the Philippines was the first national pageant that selected the country’s representatives to the global Miss World contest, from 1966 to 1976.

The franhise changed hands and went to the Mutya ng Pilipinas pageant, which then chose the Filipino delegates to the Miss World pageant from 1977 to 1991.

Under Quirino’s management, the Philippines scored its first victory in the Miss World pageant when Megan Young received the crown in the pageant held in Indonesia in 2013.

From 2011 to 2016, all of Quirino’s wards got recognized in the Miss World stage. She first sent Gwendoline Ruais, who almost bagged the crown with a second-place finish.  Queneerich Rehman cracked the Top 8 in 2012, while 2014 bet Valerie Weigmann advanced to the Top 25.

When asked who will inherit the license, Quirino said, “It will be assigned to someone else, hopefully a friend or associate whom I already introduced to [the Miss World Organization].”