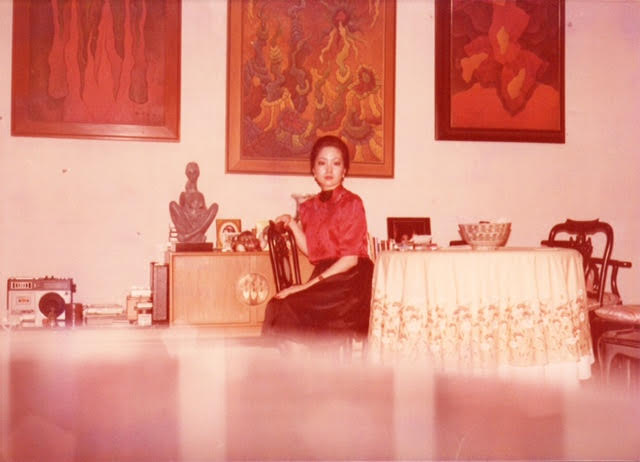 Perhaps because of the ubiquity of his most familiar work, “Genesis,” which serves as the supreme design of the famous curtain of the Cultural Center of the Philippines, there has always been insatiable desire for more of H.R. Ocampo.

Now the long wait may be over as León Gallery, for its very first exhibit in 2017, uncovers “Trove: The Coseteng Collection of H.R. Ocampo.”

The show will be inaugurated on Jan. 21 at León Gallery at Euro Villa I, Rufino and Legazpi Sts., Legazpi Village, Makati.

The exhibit will feature 73 stunning works by the maestro of color. The works cover the postwar years of 1945, when Ocampo began to experiment and develop the style he would be renowned for, up to 1978, the year of his death. It therefore encompasses over three decades, or 33 years to be exact, of Ocampo’s extraordinary career.

Hernando Ruiz (H.R.) Ocampo (1911-1978) was one of the country’s “Thirteen Moderns,” the modernist movement led by Victorio Edades. Ocampo himself would become the leader of the “Neo-Realists”; the group included Vicente Manasala and Cesar F. Legaspi.

“Coseteng,” of course, refers to former Senator Anna Dominique “Nikki” Marquez-Lim Coseteng, art collector and art-gallery proprietor and businesswoman before she was elected into the post-Edsa Congress in 1987.

Even as a young woman, Coseteng had been an assiduous champion of Ocampo’s art and was one of his more avid collectors.

The collection includes 66 works of Ocampo on paper, including half a dozen very rare watercolors and etchings.

Also in the collection are six stupendous works in oil, such as the legendary “Starward” (1959), a work which Ocampo refused to part with in his lifetime.

“Votive Forms” (1966) is also another major work that will be on exhibit. It was exhibited in the Sao Paolo Bienal, the second-oldest biennale after Venice in the art world.

A seventh work, this time in acrylic, is 6.75 feet long. Titled “Noritake Festival,” it was created for the opening of the Coseteng family’s famous ceramic plant.

“I first met [her] at her historic home in La Vista (where Mrs. Imelda Marcos apparently met her most famous architect, Lindy Locsin, in the late ’60s.)   I immediately loved her flair and her confidence in her taste in art.”

Ponce de León said the exhibit was “a long time in the making.”

“It was finally decided to include both the famous oils and the works on paper in one show,” the León owner said, “to commemorate a long friendship of a patron-gallerist and an artist. I thought it was just proper to have the drawings tell the story alongside the more renowned paintings.”

The exhibit is curated by Ramon Villegas and Lisa Guerrero Nakpil.

In his profile of the artist, Villegas writes that Ocampo was born in 1911 in Santa Cruz, Manila. Due to financial problems, the family moved from Gagalangin, Tondo to Maypajo, Caloocan, around 1917.

In 1936, the artist started the Ocampo Art Studio, together with his elder brother Luzon. In 1938, Edades included Ocampo in his list of the Thirteen Modern Artists of the Philippines.

By 1938, Ocampo became associate editor of the Herald Mid-Week Magazine. The debate between the Conservatives and the Moderns in Philippine art had already begun. Ocampo and fellow writers such as S.P. Lopez and Francisco Arcellana and painters such as Manansala and Edades upheld Modernism.

Ocampo never had formal art schooling, learning what he could from reading art magazines and books. He even declined two scholarships: to Paris in 1950 from the French government, and to the United States on a Smith-Mundt Leader grant in communications in 1951.

In 1952, his works were part of the Philippine Cultural Exhibit that went to Washington, DC and New York. In 1954, Ocampo was awarded the first-ever Republic Cultural Award in Painting.

At the age of 45, in 1956, he mounted his first one-man exhibit, showing 45 works consisting of oil paintings, color studies and sketches, at the Philippine Art Gallery.

Villegas quotes Ocampo: “The strongest in influence on my paintings are, of course, the things that I see around me everyday—the flora and the fauna, the sunshine, the rain, the flowers and the birds and the bees, the shells and the fish of the Philippines, as well as the TV films and the movies that I see.”

By 1953, Ocampo was set in the direction of abstraction: “In my pictures, I am more interested in how shapes, hues, values, textures and lines interact with one another in space, rather than capturing a photographic semblance of nature,” Ocampo said. “I am more preoccupied with the creation of new realities in terms of stress and strain, rather than in the portrayal of such conventional emotions as hate, love, anger, jealousy, etc. ”

Like most artists during his time, Ocampo went to advertising. Before he turned 60, he retired from Philprom as its senior vice president.

In the last decade of his life, he had taken to having lunch and staying for coffee and conversation with fellow artist Alfredo “Ding” Roces and lawyer Antonio Quintos at Taza de Oro restaurant on Roxas Boulevard. Soon, other artists and writers joined them. They came to be known as the “Saturday Group.” The group would occasionally have sketching sessions, sometimes with a nude model, and the public could then buy the works.

Nakpil, in her essay, “The Secret Life of Sketches,” writes that Ocampo was a “sensitive and prophetic artist of the day,” borrowing the words of Hilla Rebay, director for the Museum of Non-Objective Art in New York City.

By 1948 and the early 1950s, Ocampo found himself knee-deep in the movement called “Neo-Realism,” that hailed him as its de facto leader.

Through the 1960s and 1970s, Ocampo tapped into his own experiences as one of the first Filipino wave of Madison Avenue-style “Madmen”: from the dramatic “Rigodon de Honor” and Imelda Marcos’s butterfly sleeves, to theater props rooms and the stick-outlines of the Filipino Christmas lantern.

“It was usually one or the other,” Coseteng said. “Unlike other artists—Manansala, for example—H.R. didn’t really do a lot of watercolor, so his watercolors are rare.”

There are themes that Ocampo would return to constantly in his drawings: the flame-like creatures being the most well-known; but he also experimented with masks, needle-like forms, anthropomorphic shapes with antennas and many-segmented arms and legs like insects.

Through the years, Ocampo would return to his favorite obsessions—shapes and silhouettes found in nature, that suggested men and women and their multiple metaphors, anemones and towers, as well as fluid abstract forms that symbolized rebirth, heroes, afternoon escapes. All of them engaged in the graceful dance of life. —CONTRIBUTED