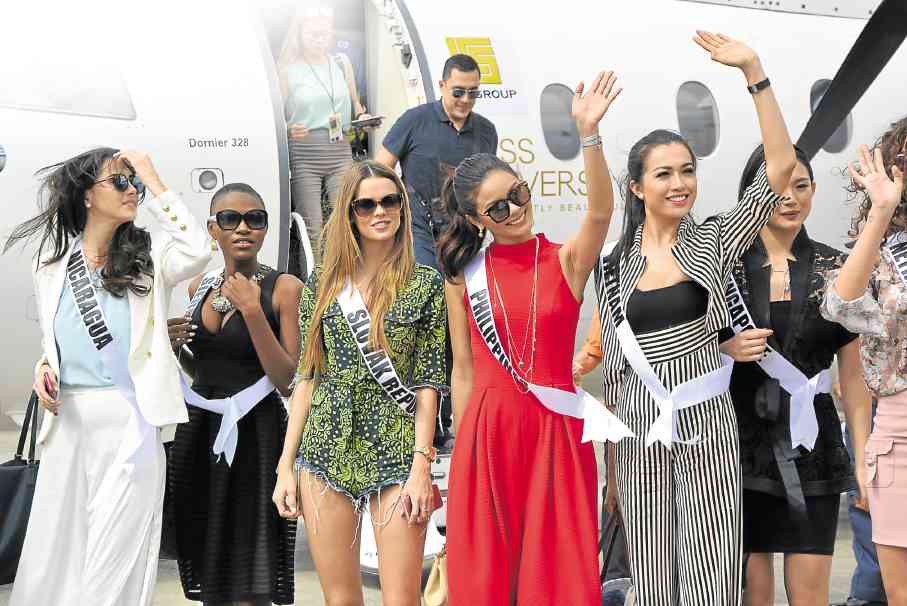 VIGAN CITY—Crowds of Ilocanos were out on the streets early Sunday morning, eager to catch a glimpse of 20 beauty queens from various countries who are participating in the Jan. 30 Miss Universe pageant at Mall of Asia Arena.

Former Ilocos Sur Gov. Luis “Chavit” Singson, one of the pageant’s producers, brought the Miss Universe contestants here to show off the province’s crafts and the preserved Hispanic stone houses lining the cobblestone Calle Crisologo for which this city was hailed as a World Heritage Site.

“It was the first time in the city’s history for Ilocanos to have close encounters with Miss Universe candidates,” said Ryan Astom, Ilocos Sur tourism officer.

They were flown here in two Fokker planes that landed at Vigan Airport.

They boarded two buses that took them to Baluarte, Singson’s sprawling vacation house and private zoo in Barangay Tamag here, passing village residents who lined the 5-kilometer road for a glimpse of their guests.

“When we have more tourists, there will be more livelihood opportunities. There will be a domino effect. Let us show them that our place is beautiful and clean so that they will keep coming back,” he said at a news briefing.

The candidates had friendly encounters with a lion, a tiger, including a newly born tiger cub, a kangaroo, and a leopard at Baluarte. They were later treated to a sea lion show.

On Sunday night, the candidates were scheduled to walk on Calle Crisologo from their hotel to the Burgos Plaza, where they would stage a fashion show featuring “abel Iloko,” the locally woven cloth.

To make sure the city would be peaceful and orderly, Mayor Juan Carlo Medina had imposed a liquor ban throughout Sunday until Monday morning.

Several streets within the Heritage Village were also closed to vehicles, including the iconic “kalesa” (horse-drawn carriages).

Tourists began arriving here on Saturday, filling all hotels around the Heritage Village.

“Many more have been calling our office for reservations. That’s why we had to refer them to hotels and inns in nearby towns of Bantay, Caoayan, San Vicente and Santa Catalina,” said Astom.

A popular tourist destination, Vigan City was inscribed in the World Heritage List of the United Nations Educational, Scientific and Cultural Organization (Unesco) in 1999.

In its website, Unesco said Vigan, established in 1572, was “the best-preserved example of a planned Spanish colonial town in Asia.”