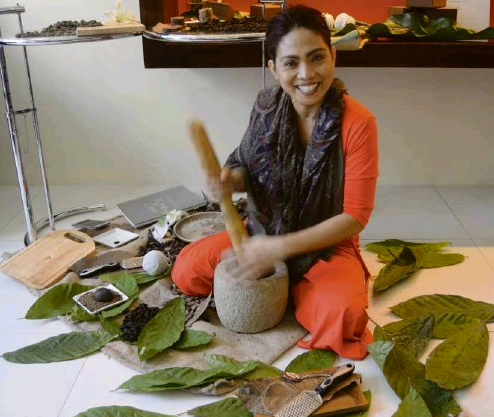 The Inquirer story gave credibility to the company and to my intention to elevate the status of local chocolates.

CEBU CITY — From a regular mountain lass in the northwest Cebu town of Balamban, Raquel Choa descended to the plains and dared to share her tablea tale to the public.

From countless visits to hotel chefs to share her tablea creations to hosting chocolate buffets to raise awareness about the country’s native chocolate, Raquel was soon hailed as “the chocolate queen.”

The journey took years but Raquel’s perseverance, confidence and hard work paved the way to elevate the status of Philippine-made chocolates, at a time when the tablea was only considered as “dirty chocolate.”

“I really just wanted to share my chocolate story to the entire Philippines and the world… that up in the mountains we actually have chocolates and it is a treasure that our ancestors have discovered but we failed to share to the world,” she said.

Her business partners—husband Alfred and close friend, Edu Pantino—backed up her vision and before long, Raquel was presenting her tablea in front of hotel chefs.

The reception was not always warm, she recalled.

There were chefs who called tablea as dirty chocolate.

One reason for the tablea’s poor reputation is the way it is prepared in the province.

“The cacao pods were opened and we often sucked the juice before we sun dry the cacao beans. The process of transforming the beans to tablea or chocolate is crude as it involves processing by hand. The resulting product makes a drink with grainy texture unlike the smooth texture of imported chocolate,” Raquel explained.

Raquel is not a trained chef. She did not finish college. But what she lacked in education, she made up for experience.

Her initial training happened when she was a young girl in the kitchen of her grandmother.

Her skills further developed in her very own kitchen where she prepared meals and treats for her husband and her eight children: Michael Ray, Michelle Honey, Anthony, Jonathan, Hanna, Alfredo (AJ), Rose Angelie and John Paul.

On January 2012, her story made it to the pages of the Philippine Daily Inquirer, her first national exposure, which “made everything official.”

“I felt that the Inquirer story gave credibility to the company and to my intention to elevate the status of Philippine chocolates. The story was like a declaration that I am serious in what I do,” she said.

This is why she did not have any second thoughts about accepting the challenge of being an Inquirer ambassador for the recently launched #MyINQUIRER campaign, highlighting the new media quintet experience.

“The Inquirer documented my sto- ry in ways that no other publication documented it during the early years of Ralfe Gourmet. I feel that the Inquirer and I share a lot of things in common… by telling stories that nobody else dared to share,” Raquel said.

From that Inquirer story, Raquel grew more confident to hold chocolate appreciation gatherings in her home, which is now called Casa de Cacao.

Before long, she earned the name “chocolate queen,” a recognition she views as a challenge to do better in her business and her advocacy.

“What we always forget to remember as Filipinos is our uniqueness and in that uniqueness, we find our strengths,” she said.

She learned this lesson in her journey to raise awareness on Philippinemade chocolates.

This lesson she also imparts to farmers, the very people who grow cacao trees.

So in one outreach activity, she announced: “Who wants to learn how to bake?”

This way, she said, people learn to create something and are not just passive receivers.

Just like her childhood days, Raquel prefers to do everything using the simplest tools.

“When I conduct demo cooking, I do not use fancy equipment because I do not want people to make excuses… that they cannot do it because they do not have that equipment,” she said.

She believes Filipinos are artists and can create anything with their bare hands.

While hers is a Cinderella story, Raquel said there were many Filipinos like her who had dreams and were working hard to turn their dreams into reality.

“We all have stories to share and we all have roles to play. Our stories have souls which define us as human beings, as Filipinos,” she said.

Raquel has another dream—one that many people called lofty—and it involves putting the Philippines in the world’s cacao map.

One of her goals is to create a Tatak Pinoy Chocolate Standard Seal for Philippine-made chocolates.

This will distinguish the taste and all other attributes of the Philippine chocolates from those of other countries.

“I hope to someday hear people say that the Philippines is a promise land because we have all the abundant resources that will help us make our lives better,” she said.

Through all these years, as her name and her chocolates gained nationwide and worldwide attention, Raquel maintains that she remains to be that mountain lass from Balamban who is still in awe of the things around her.

If she is given a chance to address the Filipino nation, Raquel said she will tell them to be “authentic” and “do not pretend to be someone else.”