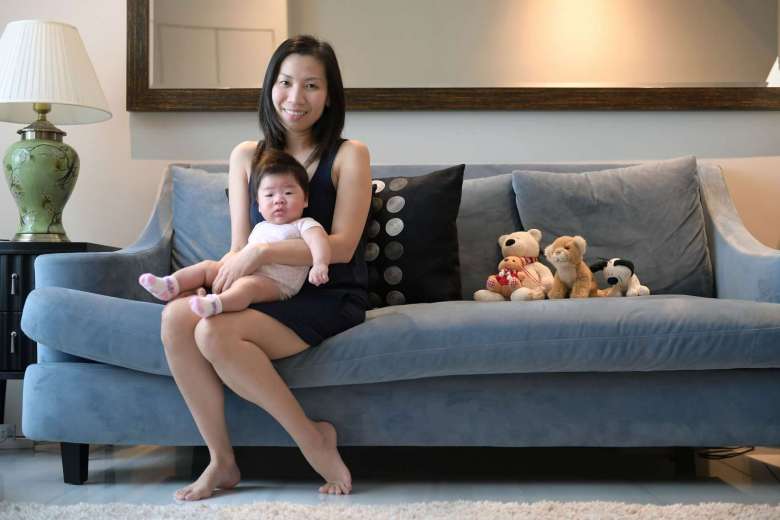 In May last year, while 17 weeks pregnant, Ms Jen Wang was battling colon cancer, and worried for her and her baby's life. THE STRAITS TIMES/ASIA NEWS NETWORK

Shortly after Chinese New Year last year, Ms Jen Wang, 33, was pregnant with her second child, and had just moved into her new Build-To-Order HDB flat in MacPherson with her family.

However, a few months later, she found out she had stage 4 cancer – rare for a pregnant woman, not just in Singapore but other countries, too.

In May last year, while 17 weeks pregnant, she was battling colon cancer, and worried for her and her baby’s life.

She was also thinking about her son and husband’s future without her, and in a dilemma about making a decision about her course of treatment.

Dr Benjamin Chuah, an oncologist from Mount Elizabeth Novena Medical Centre, did not mince his words when he spoke to her.

“You have three options. Each choice is a cup of poison and you have to choose one,” he told her.

She could go for “radical surgery” to take out the tumor, but mother and baby could both die.

The second option was to undergo chemotherapy, but there was a chance the cancer may not respond to it.

The drugs would also be toxic to the body, and there was the risk of losing the baby.

The final option was to do nothing but this meant the cancer would grow aggressively and compete for space with the baby.

Ms Wang was in a dilemma. Should a pregnant woman who is diagnosed with cancer begin treatment before the child is born? Some studies show most chemotherapy drugs can pass to the baby via the placenta.

She prayed and made a decision. “I decided to start chemotherapy immediately and went ahead without thinking too much,” said Ms Wang, whose son is two years old.

Before this, she decided to keep the baby, despite the urging of her concerned family members to go for an abortion, so that she could focus on fighting for her own life.

She and her husband, legal counsel Jeremy Goh, 35, have been married for four years.

Said Mr Goh: “I considered abortion because her life was in danger and the doctors said treatment options could be limited because of the baby. We talked about it and I decided to support her decision.

“I prepared myself mentally to care for the children should anything happen to her, and even if the baby is born with disabilities.”

By then, Ms Wang was 21 weeks into the pregnancy. The cancer had spread to an area near her right kidney and was pressing on the common iliac artery – a large artery that also supplies blood to her womb.

According to doctors, people suffering from stage 4 colon cancer have a median timeframe of two years to live. For Ms Wang, the prognosis was worse because she was pregnant.

Pregnancy lowers a person’s immunity and may delay treatment.

She started her first round of chemotherapy last June, when she was 21 weeks pregnant.

Every two weeks, she would go through another three-day cycle of chemotherapy. Besides suffering from severe nausea and fatigue, she was in so much pain sometimes that she forgot to breathe, and she hyperventilated.

After the fourth cycle of chemotherapy, when she was 27 weeks pregnant, the doctor decided to stop treatment and wait. Five weeks later, her hemoglobin levels dipped and she became feverish.

That week, a caesarean section was done to get the baby out.

Said Ms Wang: “She was perfect. She had so much hair, more than her brother, despite me having gone through chemotherapy and losing my hair.

“I asked if the baby was okay and they said she was okay, and everyone was laughing.”

Ms Wang and her premature baby were then separated.

The baby girl, called Jill, was sent to the intensive care unit and Ms Wang resumed chemotherapy two weeks after the delivery. She also started on immunotherapy, a new form of treatment that was undergoing clinical trials at the time.

But before long, there were more problems.

Two weeks later, Ms Wang’s colon ruptured and doctors told her family members to rush down to the medical center – patients have died from having a ruptured colon.

But the emergency surgery was a turning point.

“The operation was a miracle. Doctors not only managed to take out about 50cm of my colon, but they also removed parts of the tumor around the kidneys,” said Ms Wang, who was formerly an executive with the Singapore Cancer Society (SCS).

Last month, she underwent a scan and there was no evidence of the cancer.

The recurrence rate for cancer is about 70 per cent.

For now, Ms Wang and her family are celebrating.

The baby is four months old now, and healthy. Ms Wang said she hopes to fight on for her children.

“Facing mortality has showed me how to live. I used to be paiseh (embarrassed, shy), but now, I will not wait to tell my loved ones how I feel about them,” said Ms Wang.

She added that she hopes to continue working or volunteering with the SCS.

Ms Wang will be among those taking part in an SCS fund-raising walk called Relay for Life at Bukit Gombak Stadium next month.

Participants will walk or run together to convey the message that no cancer patient needs to go through the illness alone.

The event aims to show solidarity with cancer survivors and honor them and their caregivers, while raising funds and awareness.

Said Ms Wang: “I want to share my story with others, about how my struggles have helped to strengthen my faith.”