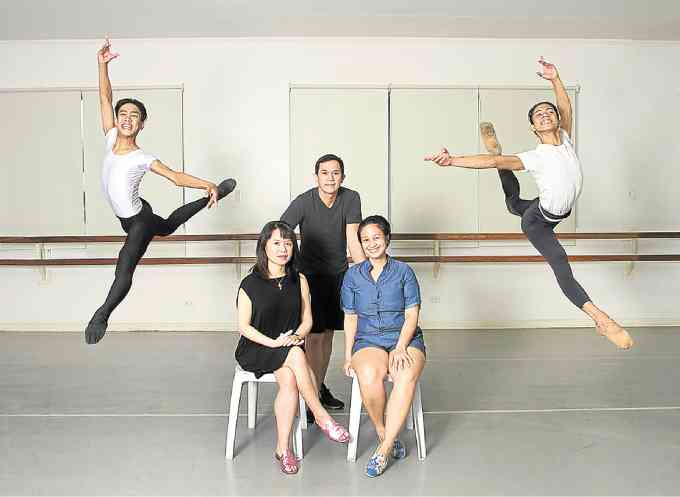 Netizens were recently abuzz about a video of two street children dancing ballet. John Edmar Sumera and Benedict Sabularse caught the attention of the media, not only for their talent, but also their drive to rise above their circumstances.

Despite being late starters at 13 and with barely three years of formal training, Sumera and Sabularse will compete in the Prix de Lausanne competition from Jan. 29 to Feb. 5 in Lausanne, Switzerland.

This prestigious tilt is open to dancers between ages 15 and 18 in the nonprofessional category. Scouts from all over the world come here to look for fresh talent for world-class companies. Winners receive an all-expense paid scholarship in a professional school or apprenticeship in a company.

Former dancer Cherish Garcia, owner of Academy One Music & Ballet Center, handles the dance program of Tuloy Foundation, an NGO for street children. She hopes that the Prix de Lausanne will be a stepping stone for her protégés.

This competition helped launch the careers of such dance luminaries as Julie Kent, now artistic director of Washington Ballet and Alessandra Ferri of the Royal Ballet.

When he competed in 2008, Marcelino Libao Jr., an alumnus of Steps Dance Studio, received attractive offers and is now with Hamburg Ballet in Germany.

Garcia said the selection process was stiff. The boys had to send an unedited, 12-minute video of a basic technique class which showed their fluidity of movement, pirouettes, aerial turns, footwork and leaps. Sabularse and Sumera were chosen among the 72 finalists out of 350 applicants worldwide.

Sumera, 16, is naturally gifted with long limbs, arched feet and flexibility in the hips. He dazzles with his royal deportment and the effortless height of his jumps. He will be performing Franz’s solo from “Coppelia.”

Sabularse, who is turning 17 on competition week, will show off his bravado in a solo from “Don Quixote.” He’s a fountain of energy, and his face glows with mischief.

Contestants are required to learn a contemporary solo by choreographer John Neumeier, artistic director of Hamburg Ballet. The pieces are more contemporary; in Sumera’s solo, “Spring and Fall,” he executes a knee turn with a leg extension that swings into a curve. He then turns on his hips and rolls on the floor. The challenge is to make it look seamless.

A dynamic dancer, Sabularse’s solo “Vaslan Gigue” features a suspended leap while holding the ankle in the air.

As of this writing, Sabularse and Sumera are in Hamburg, being coached by Libao in the Neumeier style.

Classes and rehearsals have been intense. Asked to define hard work, they both explained in Tagalog that it was about firing every muscle and sinew of their bodies to their limits.

Before entering Tuloy Foundation, both boys were estranged from their fathers.

Sumera lived in Laguna before moving to his uncle’s house in Muntinlupa. His mother was a sewer and now drives a pedicab. Unable to support her son, the mother sent Sabularse to Tuloy Foundation where he learned vocational skills, rugby and football

Sabularse’s parents opted to separate when he was three, and he was left in the care of his grandmother. His lola would repack food to be sold in the market while he carried her wares.

Aging fast, the grandmother brought Sabularse to Tuloy Foundation to keep him out of trouble.

He was resistant at first; “I thought my lola was going to put me in an orphanage,” he said.

It was in a December program at De La Salle Zobel school when Rodney Catubay and Raymond Salcedo, then residents of Tuloy Foundation for street children, showed off their pirouettes and jumps with athleticism and grace. The audience, mostly abandoned or poor children, had never seen any ballet before.

Sumera and Sabularse were mesmerized. They looked up to their Kuya Rodney who had been the leader of the pack, always taking the initiative and guiding the younger ones.

Catubay and Salcedo came from the first batch of dance scholars of Academy One Music & Ballet Center. The talented duo received a scholarship for a summer program at the Jean M. Wong School of Ballet in Hong Kong and have since been absorbed by Ballet Manila.

In 2014, Academy One held another audition for the street children. Sumera and Sabularse wanted to follow in Catubay’s footsteps. In their first year, the boys immersed themselves in technique classes and learned ballet jargon in French. They found their voice in dance.

Their mentors, Garcia, Jeffrey Espejo and wife Pamela Asprer, saw that they exuded natural elegance and easily zipped through their movements. The boys were so eager to learn that they sometimes overworked themselves.

Espejo would often chide them for risking injuries when they practiced their jumps on cement flooring at Tuloy Foundation. In one interview, they said they idolized dancer Daniil Simkin, the millennial version of Mikhail Baryshnikov. However, they look up to Espejo for molding them.

Last year, Sumera and Sabularse again received a summer workshop scholarship at Upper House for students in the final year of training at the Royal Ballet School.

Sumera and Sabularse adapted themselves to the diet of chips and bread instead of white rice, and felt comfortable with classmates from all over the world. The boys gained more confidence when they saw that their technique was on par with that of their schoolmates.

Their self-esteem was boosted when they competed in the Asian Grand Prix in Hong Kong last year. Sumera won a silver medal, while Sabularse placed fourth and received the Margot Fonteyn Award.

Their success is attributed to both their commitment and their teachers. Garcia has been getting patrons and dance coaches, and being a mother hen, steering them away from girls. The Espejos spend hours guiding them during international competitions.

Seeing the transformation of the boys, friends and relatives are happy they have had opportunities to travel. Sumera hopes his father has been hearing about his development.

Espejo pushes Sabularse, who is short and not as beautifully proportioned as Sumera. However, he makes up for it with his magnetic stage presence.

Sabularse said, “I want to make people happy through dancing.”

He added that his training taught him how to tell a story through dance, and most important, how to express truth.

He explained in Tagalog that he wanted to dance not only for a better life. “I’ve learned to challenge my limits.”—CONTRIBUTED