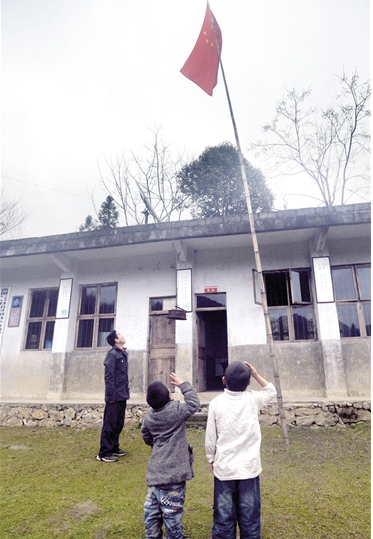 Not all heroes wear capes, and in this case, he looks like an everyday man with a chalk in hand.

A grade school teacher from the rural Youyang County in inland China has received the adoration of netizens, as he continues to teach in a local school with a total population of two students.

According to the Chongqing Morning Post, 53-year-old Yang Jinhua has been the resident teacher, cook, and even the occasional nanny of two young boys who continue to seek education in the small village.

Since he was 18, Yang has been teaching in the village elementary school and has continued to do so for the past 35 years, despite being offered jobs by principals in other counties, town centers and even corporations.

“Whenever I see the kids’ smiling faces, the curiosity of the children, I feel even more responsible (for them),” he was quoted as saying in the report, as translated by Mashable.

The dedicated instructor added that he fears his students would eventually stop going to school if he leaves, since the nearest establishment is about 4 kilometers (2.5 miles) away.

For his valiant efforts, Yang has become an online celebrity on the social network Weibo and has been lauded by netizens for his sacrifice.

User @ATimeForDeepFeelings wrote: “Youyang is a very rural area—the poverty and hardship is unimaginable for us city kids. To be a teacher there for 35 years is very noble,” while @AhBuTongXue chimed in, “Hope these kids don’t let their teachers down and earn great achievements.”

Another user, meanwhile, took a more light-hearted approach: “Two kids… if you don’t listen in class, you can get caught very easily,” @6002ChenGe wrote.

The case of Yang’s almost-empty school has become a common sighting, especially across rural China, due to the mass migration of parents seeking work in more urban places across the country.

Such institutions have been nicknamed “sparrow schools,” where lack of resources, combined with a declining student population, has made it impossible for facilities to continue their operations.

Still, the kindhearted Yang keeps his positive mindset and is already looking forward to next semester, as four more children have reportedly enrolled in his class.

“Even if there’s one kid here, I’m still going to stay,” he said. Khristian Ibarrola