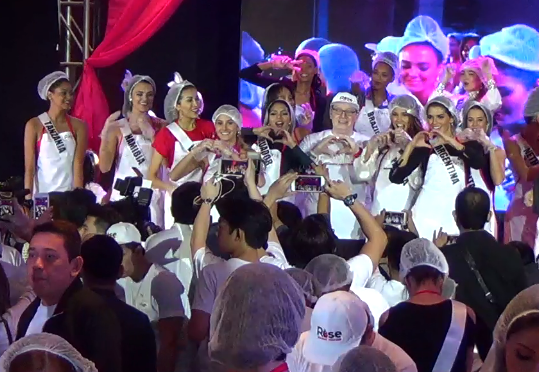 Health Assistant Secretary Dr. Eric Tayag has once again lived up to his name as the “Dancing ASec.”

The secretary gamely led the Miss Universe beauties into dancing onstage after the pageant candidates finished packing food items for pregnant women in need at the Conrad Manila Hotel, Pasay City on Wednesday

Tayag is known for promoting the health department’s campaign by dancing.

Tayag danced beside the candidates of Panama, Ecuador and Argentina, while Miss Venezuela brought along a kid to dance with her in front, to the tune of Dawin’s “Jumpshot.”

The Miss Universe candidates packed food items to be donated as proceeds for pregnant women in need in partnership with the Department of Health and the group “Rise Against Hunger.”

Health Secretary Pauline Ubial told the beauty queens that the food packs will be donated to 100 pregnant women in a bid to reduce premature births among mothers and malnutrition among newborns./ac