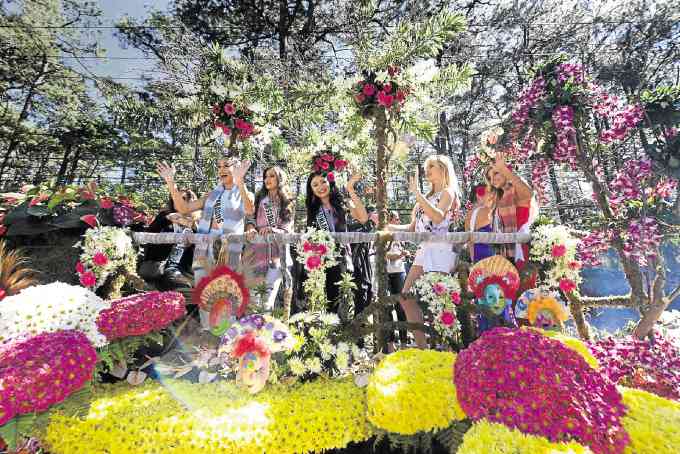 FLOAT OF FLOWERS AND MASKS Several Miss Universe candidates ride on a float adorned with flowers and masks representing the Visayas during a parade on Session Road in Baguio City. The three other floats bearing the other beauties, including reigning Miss Universe Pia Alonzo Wurtzbach, represented Luzon, Mindanao and the sponsoring Baguio Country Club. —EV ESPIRITU

BAGUIO CITY—The midmorning temperature on Wednesday was the right chill for reigning Miss Universe Pia Alonzo Wurtzbach and 28 beauty queens who were paraded on four flower-decked floats along Upper Session Road here on the Baguio-leg of their Philippine tour.

Families gathered along South Drive as early as 6 a. m. to see the Miss Universe candidates when the temperature dropped to 12.6 degrees Celsius. But with schools closed for the day, their children did not seem to mind the discomfort.

By the time the candidates were flown to Loakan Airport at 8 a.m., the temperature had risen to 15 degrees. They were received by Philippine Military Academy cadets, who performed a silent drill exhibition for them.

Close to 20,000 people lined the sidewalks along a 1.5-kilometer stretch, from Upper Session Road to South Drive, for the parade. The beauties were distributed among three floats representing Luzon, Visayas and Mindanao.

The beauties were greeted by people who screamed, “We love you!” and “Welcome to Baguio!”

“Hola!” cheered a group when it spotted Miss Spain Noelia Freire and Miss Colombia Andrea Tovar, who responded by blowing kisses. The loudest cheer went to Wurtzbach, who accommodated the request of spectators by posing for their cameras.

Eight candidates missed the parade. They were escorted to BCC where the rest of the day’s activities took place.

Foreign students living in Baguio joined the crowd. A group of Koreans cheered Miss Korea Jenny Kim. A resident of Indian descent asked the police about the parade route because he and his friends were looking for Miss India. She, however, was not part of this batch of candidates.

A group of Filipinos was cheering for Miss New Zealand Tania Dawson while displaying her country’s flag. They turned out to be Dawson’s Filipino relatives, who live in Pangasinan province.

Guests and members of BCC turned up at the hotel lobby to take photos of Wurtzbach and the candidates, who where billeted there for the night.

The candidates picked strawberries at the club’s gardens, opened a golf tournament and were treated to art exhibitions and performances.

The visit affected traffic and delayed commuters rushing to work, but most did not mind the inconvenience because of the rare occasion.

Some 5,000 people participated in the parade, among them elementary and high school students and members of marching bands and cultural dancers from as far as Tabuk City.

Anthony de Leon, BCC manager who oversaw the Miss Universe Baguio visit, said the Kalinga group volunteered to travel for 10 hours to perform for the candidates.

“They were not paid. They took the initiative to coordinate with us because they wanted to be part of history,” he said.

Members of Baguio City National High School band were asked to be at their school at 5:30 a.m. to prepare for the 10 a.m. parade that started an hour late.

Motorists had to find their way around the parade route because major roads were closed to traffic as early as 6 a.m.